ONE of the Philippine Azkals' biggest fan groups has called on fans to troop to the Philippine Sports Stadium and support the national team’s campaign in its make-or-break match against defending champion Thailand in the AFF Suzuki Cup on Friday.

Ultras Filipinas leaders admitted they were saddened by the pathetic turnout during the Azkals' thrilling 2-2 draw with Indonesia on Tuesday, where home fans were even outnumbered by the Indons' travelling supporters inside the Bulacan, Arena.

On Tuesday, declared attendance was a paltry 2,068 spectators, just half of the turnout for the opening match against Singapore.

Indonesian fans occupied one area of the stadium and even unfurled a giant flag in support of their team.

The location of the Philippine Sports Stadium, around 20 kilometers away from Metro Manila, has been blamed for the poor turnout.

Located at the Ciudad de Victoria, the Iglesia Ni Cristo-owned venue is not accessible by public transportation, although the Philippine Football Federation (PFF), anticipating the problem, provide service buses for fans. 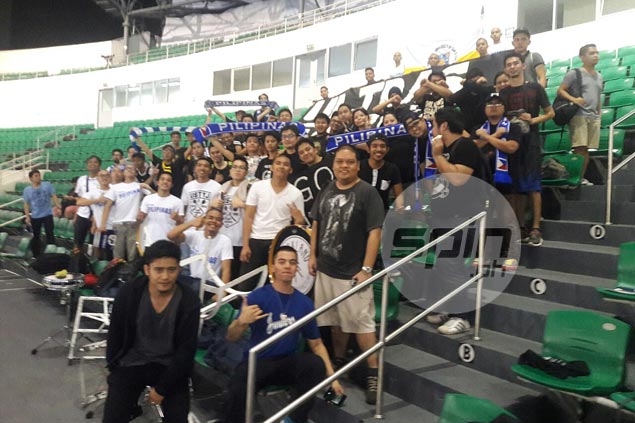 The PFF explained it initially proposed Rizal Memorial Stadium in Manila to be the main venue of the Suzuki Cup preliminaries, with the Philippine Sports Stadium as the secondary venue.

But organizer Lagardere Sports nixed the Rizal Stadium in favor of the 20,000-seater Philippine Sports Stadium, the PFF added.

Still, the Ultras are doing everything to make their presence felt in the Bocaue venue. On Tuesday, they were joined by drummers of University of Santo Tomas to cheer on the Azkals.

With the all-important match against Thailand set on Friday, members of the Ultras are confident more fans with show up to cheer on the Azkals against a team they have yet to beat in the 20-year history of the tournament.