Nomads turns on the style in rout of Mendiola

NOMADS banked on a second-half scoring surge to trounce Mendiola, 7-2, on Sunday night to grab the solo lead in Group C of the United Football League Cup at the University of Makati pitch.

Steven Borril and Jason Arroyo each scored a brace, while Aron de Rama, Phil Connoly, and Paolo Enrile added a goal apiece for Nomads, which ended the elimination round with nine points in four matches.

Nomads can still surrender the top spot -- and the quarterfinal berth that goes with it -- to either Loyola Meralco and Pachanga, which both have six points in three matches.

Mendiola, which remained at the bottom of the group, was poised to pull off its maiden victory in the campaign after Prince Alhassan struck to give the club a 2-1 advantage at the 59th minute.

Alhassan, however, incurred a yellow card for removing his shirt during his goal celebration and got thrown out for getting the same penalty for dissent.

Left a man down, Mendiola soon allowed Nomads to score six goals in a span of 30 minutes.

In the second game, Philippine Army found a tough challenge in Sta. Lucia as they battled to a 1-1 draw.

The Realtors drew first blood with Da Bin Kim’s goal 24 minutes into the match, before the Troopers equalized in the second half with a 61st minute goal from Eduardo Gempisaw.

It was the second straight draw for the Troopers, who remained on top of Group D with eight points.

The Realtors, on the other hand, remained second to the last in the same group with four points in three matches.

Stallion, meanwhile, unleashed its full wrath on Agila as it scored an 8-0 shutout to grab solo second behind Army in Group D.

Mario “OJ” Clarino and Yeul Woo Nam also struck for the Stallion, which left Agila winless in its four-game campaign. 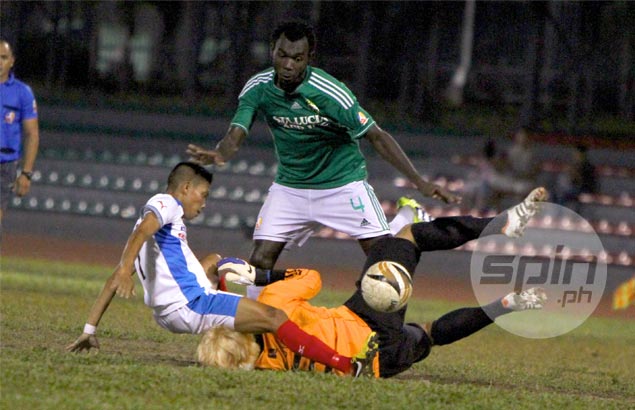