NEW coronavirus infections among German soccer squads revealed on Monday highlighted the challenge for European leagues to restart during the pandemic.

The ongoing severity of the outbreak was not grasped by striker Salomon Kalou, who was suspended by Hertha Berlin for flouting social distancing measures by livestreaming himself fist-bumping teammates and bursting in on an apparent COVID-19 test — all while complaining about a pay cut.

The new infections hurt the Bundesliga's hopes of resuming this month. Chancellor Angela Merkel and 16 state governors will determine on Wednesday if the risk of infections spreading at stadiums is too great — even without spectators.

Ten positive COVID-19 cases were reported from 1,724 tests conducted across the 36 clubs in Germany's top two divisions. Hertha's squad was given the all-clear but the team said Kalou gave the "impression that individual players are not taking the coronavirus issue seriously, especially in the current discussion about a resumption of play." 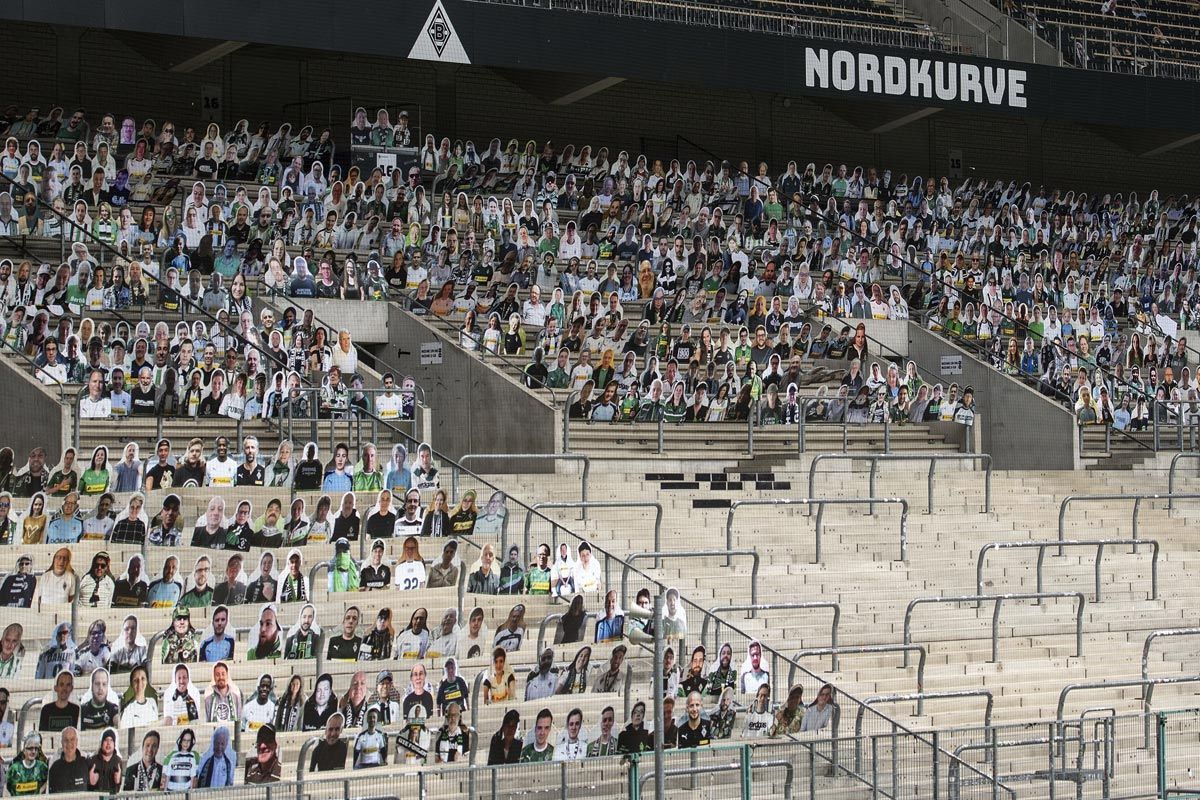 Photos of fans of Bundesliga team Borussia Mönchengladbach displayed in the stands of the Borussia-Park stadium in Moenchengladbach on April 29, 2020.

Games are likely to be restricted to key personnel across Europe for many months, dealing a heavy financial blow to clubs and national associations.

The English Football Association, which owns Wembley Stadium and runs the national teams, is cutting its annual budget by 75 million pounds ($93 million) as it tries to offset a potential deficit of 300 million pounds over the next four years.

"It's hard to foresee crowds of fans — who are the lifeblood of the game — returning to matches any time soon," FA chairman Greg Clarke said.

Like in Germany, soccer in England and Spain was suspended in March. Both the Premier League and La Liga are hoping to resume in June, although squads are still being kept away from clubs.

Widespread COVID-19 testing of Spanish league players will begin this week as they are expected to return to training fields for individual fitness sessions while respecting social distancing measures.

"The return of football is a sign that society is progressing towards the new normal," Spanish league president Javier Tebas said. "It will also bring back an element of life that people in Spain and around the world know and love.

"People's health is paramount, so we have a comprehensive protocol to safeguard the health of everyone involved as we work to restart La Liga. Circumstances are unprecedented, but we hope to start playing again in June and finish our '19-'20 season this summer."

A month's training is anticipated before games can resume, although the timetable will depend on how governments unlock their lockdowns.

Spain, Italy and Britain have been the hardest hit by the pandemic in Europe with each country recording more than 25,000 known deaths.

The Premier League's plans to resume have been rocked by some relegation-threatened teams opposing plans for games at neutral stadiums to prevent fans gathering outside.

The early termination of the French season on government orders last week has already sparked recriminations.

Amiens is asking the league to review its decision to relegate the club from the top-flight, launching a petition on Monday to "demand justice for this far-reaching decision which goes against fairness in sport."

The northern French team was next-from-last in the 20-team Ligue 1 with 10 games left and was four points behind 18th-placed Nimes. The bottom two teams are automatically relegated and Amiens said the "fairest choice" would be to expand Ligue 1 and make it a 22-team division for the 2020-21 season.