MIKEL Arteta marked his first European game as Arsenal manager with a 1-0 victory at Olympiakos in the first leg of their round-of-32 meeting in the Europa League on Thursday (Friday, Manila time).

Manchester United was held to a 1-1 draw at Club Brugge while Inter Milan had an easier time at Ludogorets in Bulgaria, with Christian Eriksen scoring his first goal for the Italian club in a 2-0 win.

Another Premier League side, Wolverhampton Wanderers, cruised to a 4-0 win over Espanyol thanks to a hat trick by Diego Jota and a spectacular long-range volley by Ruben Neves.

Winning the Europa League may be the best chance for all three Premier League teams to book a spot the lucrative Champions League next season.

Scottish side Rangers delivered the comeback of the evening by rallying from 2-0 down to beat Braga 3-2 at home.

Basel, Roma, Leverkusen and Wolfsburg also won. The second legs are scheduled for next week.

Having ended a two-month scoring drought this past weekend, Alexandre Lacazette made it two goals in two games with a late winner in Athens.

Pierre-Emerick Aubameyang started the move on the left and released Bukayo Saka, who surged into the area and provided a precise cross for Lacazette to tap in nine minutes from time.

Arsenal had goalkeeper Bernd Leno to thank for keeping the game scoreless until then, with the German making several key saves in the first half.

"The first 10-15 minutes, we suffered," Arteta said. "The executions on the simple things was poor. We had a situation where we could completely break them and we kept giving simple balls away and that was almost throughout the game." 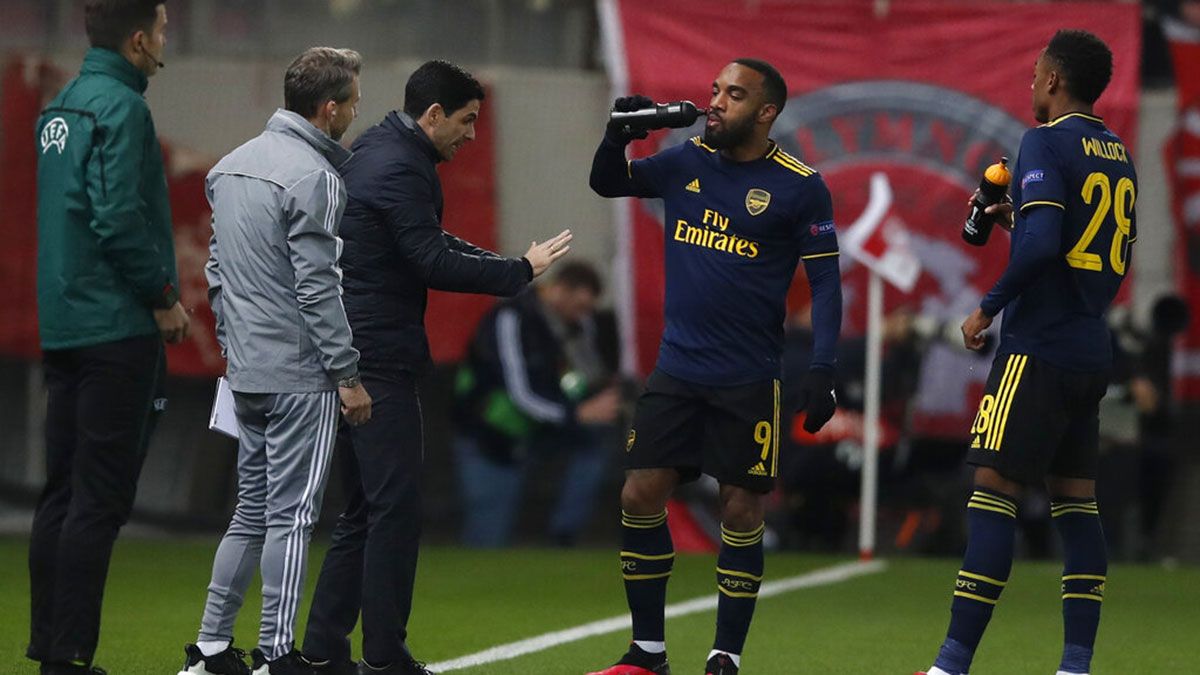 Emmanuel Bonaventure put Brugge ahead after 15 minutes in Belgium, collecting a long pass from goalkeeper Simon Mignolet and one-timing a lob over the onrushing Sergio Romero.

Brugge had several chances for a second goal but Anthony Martial equalized for United in the 36th, capitalizing on Brugge's sloppy play to beat Mignolet one-on-one for his third goal in four games. Martial also hit the post later in the first half.

United manager Ole Gunnar Solskjaer made six changes to his starting lineup from the team that beat Chelsea 2-0 at Stamford Bridge on Monday. But new signing Odion Ighalo remained on the bench until he replaced Martial in the 67th.

After two scoreless draws in the Premier League, Wolves rediscovered their scoring touch. Jota netted a second successive hat trick in the Europa League, but it was Neves who provided the highlight against Espanyol, the last-place team in the Spanish league. Neves controled the ball with his chest before unleashing a sublime volley from long distance to make it 2-0 in the first half.

Last season's semifinalist Eintracht Frankfurt is having another strong European campaign despite struggling in the Bundesliga, with Daichi Kamada scoring a hat trick in a 4-1 win over Salzburg. Kamada put Frankfurt 3-0 up in the 53rd before Filip Kostic added the fourth for the Germans.

Two of Inter's recent big signings put the Italian team on the brink of a place in the next round. Former Manchester United striker came off the bench to set up Eriksen for his first goal since joining from Tottenham in January. Lukaku then doubled the lead with a penalty in stoppage time.

Ajax, though, will have to mount a big comeback in the second leg in order to advance. Brazilian striker Deyverson marked his European debut for Getafe with a goal and substitute Kenedy added the second in injury time against the Dutch champion, which reached the Champions League semifinals last year.

Rangers looked to be in big trouble after Fransergio and Abel Ruiz put Braga up 2-0 in Glasgow. But Ianis Hagi, the son of Romania great Gheorghe Hagi, started the comeback in the 67th minute and completed it with the winning goal in the 82nd, afte Joe Aribo had equalized for Steven Gerrard's side.

In a match of two teams that dropped out of the Champions League, Shakhtar Donetsk defeated Benfica 2-1.

Sevilla, the most successful team in the competition, remains without a win in five games across all competitions. Ciprian Deac put Cluj ahead from the penalty spot in the second half before substitute Youssef En-Nesyri equalizied for the Spanish team.

Celtic goalkeeper Fraser Forster saved a late penalty to help the Scottish club hold on for a 1-1 draw at Copenhagen.

Basel took a big step toward the round of 16 after a 3-0 away win at APOEL, while Roma defeated Gent 1-0.

Wolfsburg came from a goal down to edge Malmo 2-1. The visitors took the lead through Isaac Kiese Thelin's penalty early in the second half before Josip Brekalo equalized and Admir Mehmedi scored the winner.