THE Lionel Messi era has begun at Paris Saint-Germain, without a goal for the Argentine superstar but plenty of adulation and fanfare.

Messi made his debut for PSG on Sunday after coming off the bench midway through the second half in a 2-0 win at Reims in the French league.

Messi replaced his friend and former Barcelona teammate Neymar in the 66th minute and they shared a hug.

After years of glory for Messi at the 99,000-capacity Camp Nou stadium in Barcelona, the record six-time Ballon d'Or winner and four-time Champions League victor made his first PSG appearance at the modest 20,000-seater Stade Auguste Delaune.

Such is Messi's star factor that the home fans chanted "Messi, Messi" while a smiling Reims goalkeeper Predrag Rajkovic took a photo of Messi holding a child after the game.

PSG coach Mauricio Pochettino was touched by the reception for Messi, pointing out that supporters of both teams were delighted to see him play.

"The welcome he got was something beautiful to see and hear, on the part of our fans but also the Reims fans," Pochettino said. "Messi was very happy about it. His presence generates more enthusiasm, everyone can feel it and it has an effect on the other players."

Before the match, hundreds of fans gathered for a glimpse of Messi as he descended the team bus and he waved back at them.

They wanted to see one of the all-time greats, along with Pele and the late Diego Maradona, who Messi adored.

He netted 672 goals for Barca and won 35 trophies for the Spanish giant, including the 2015 Champions League alongside Neymar.

That was the last time Messi won Europe's elite trophy and, somewhat ironically, his last goal for Barca in the Champions League was a brilliant strike away to PSG last season in the round of 16. 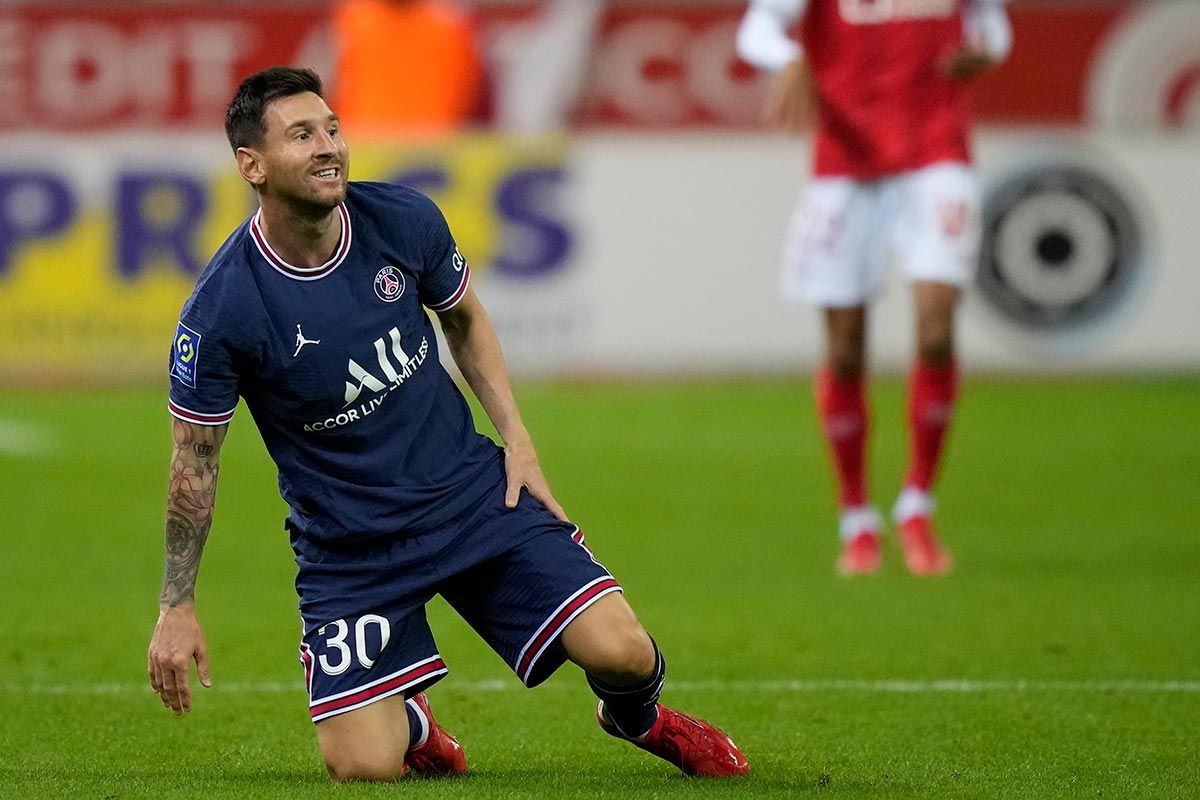 The 34-year-old Messi, who led his nation to the Copa America title last month, joined PSG three weeks ago after his new contract with Barcelona fell through.

Striker Kylian Mbappe was named in the starting lineup as Real Madrid tries to sign him before the end of the summer transfer window.

Mbappe had already scored both goals before Messi came on.

He headed in Angel Di Maria's cross in the 15th minute and then turned in Achraf Hakimi's cross in the 63rd for his 135th goal since joining PSG in 2017.

"No, I wasn't surprised by his enthusiasm," said Pochettino, who did not comment on Mbappe's immediate future.

For it remains to be seen whether it's his last for PSG, which has started the season with four straight wins and has 12 points.

French champion Lille and Monaco finally won their first games of the season.

Yusuf Yazici and Jonathan David scored as Lille beat Montpellier 2-1, and Sofiane Diop grabbed both goals as Monaco bounced back with a 2-1 win at Troyes.

Angers remains unbeaten and has 10 points after beating Rennes 2-0 at home.