Messi ties Pelé for club record with 643 goals, but Barcelona settles for draw

BARCELONA, Spain — Lionel Messi has another individual scoring milestone, but he sure doesn't have a team that looks like a champion.

Messi equaled Pelé's all-time club scoring tally on Saturday (Sunday, Manila time) in a 2-2 draw with Valencia. His 643rd career goal for Barcelona since his 2004 debut matched Pelé's tally for Santos from 1957-74.

Messi is Barcelona's and the Spanish league's all-time leading scorer. In January 2018, he became the most prolific scorer among Europe's top leagues when he reached 366 league goals, surpassing Gerd Mueller's Bundesliga mark of 365. Messi had already surpassed Gerd Mueller's single-year goal mark by scoring 86 times in 2012.

Pelé congratulated the Argentina forward on social media: "Like you, I know what it's like to love wearing the same shirt every day. Like you, I know that there is nothing better than the place we feel at home.

Pelé's comments went right to the heart of Messi's uncertain situation at Barcelona.

Messi has yet to recant on his announcement last summer that he wanted to leave the club which is no longer the dominant force that he had done so much to forge over the past two decades. His contract expires in June, and he will be free to negotiate with other clubs come January. 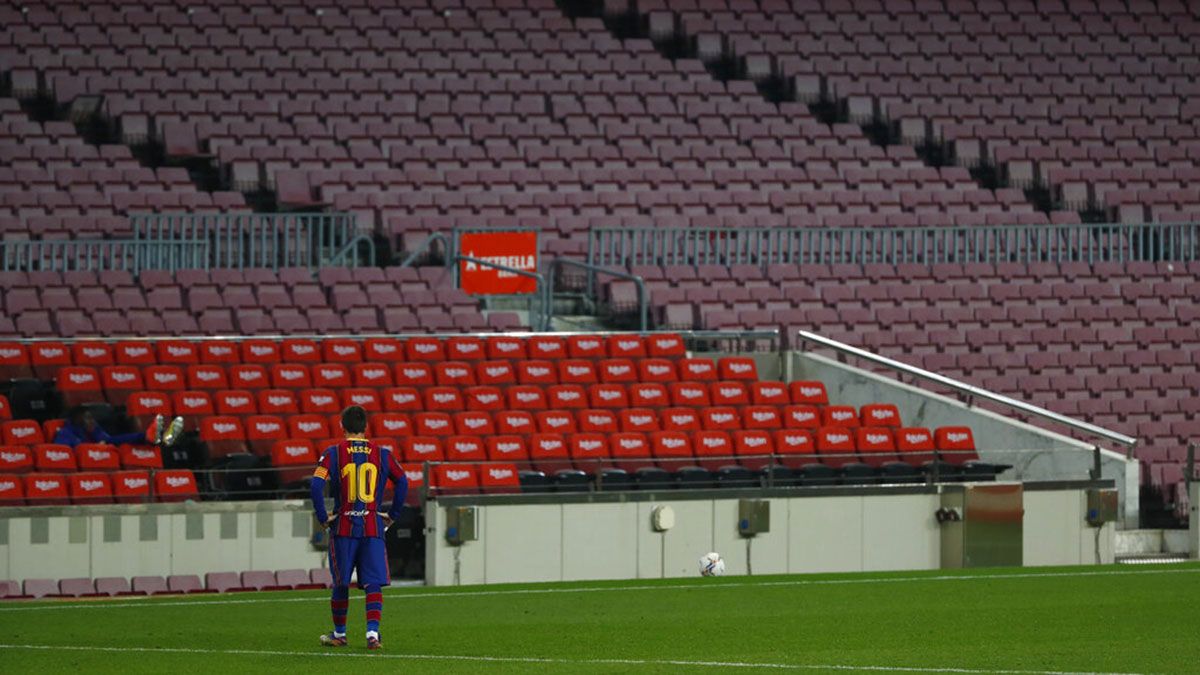 Messi canceled out Mouctar Diakhaby's opener for Valencia when he scored in first half injury time moments after Jaume Domènech saved his penalty shot. Jordi Alba recovered the rebound of Domènech's save and crossed it to the far post where Messi headed it in.

Central defender Ronald Araújo scored his first career goal for Barcelona with an acrobatic kick for 2-1 at Camp Nou in the 53rd.

But José Gayà set up Maxi Gómez to hit back for Valencia in the 69th and split the points.

Koeman attributed the slip to the youth of his team, which he is trying to build around a veteran core. Koeman gave consecutive starts to Araújo and Óscar Mingueza, both 21, and entrusted playmaking duties to 18-year-old Pedro "Pedri" González. Sergiño Dest, at 20, has become his undisputed starter at right back with Sergio Roberto injured.

"The age of some players can explain why there is a certain inconsistency because consistency comes from playing together for a long time," Koeman said. "We lacked control and lost too many balls in defense sometimes. I saw my team have doubts."

A botched marking scheme made it easier for Diakhaby to head in Valencia's opener in the 29th when Antoine Griezmann -- who is significantly shorter than the center back -- lost his mark of him during a corner kick.

"We don't have many tall players to defend their tallest ones … but we cannot leave anyone wide open," Koeman said. "We have to at least be there, be engaged."

Suárez's goals were his first since he recovered from the coronavirus. He isn't the voracious scorer he used to be at Barcelona before changing clubs this summer, but he is still a world-class finisher when his teammates get him the ball in scoring position.

Substitute Diego Costa, who replaced João Félix after he took a hard knock, put the result beyond doubt for Atletico when he earned and converted a penalty with 10 minutes remaining in his first appearance after missing seven games due to injury.

Levante overcame an opening goal by Sociedad to get a win that pulled it out of the relegation zone. Levante outplayed Sociedad in the second half and Jorge de Frutos blasted in the winner with three minutes remaining.

Sevilla missed the chance to move ahead of Barcelona after conceding a late goal in a 1-1 draw with Valladolid.