BARCELONA, Spain — Lionel Messi celebrated his 700th appearance for Barcelona by putting on another dominant performance as the Spanish club won its Champions League group for a 13th consecutive season.

Messi led Barcelona to a 3-1 victory against Borussia Dortmund on Wednesday (Thursday, Manila time) by scoring one goal and setting up two more for strike partners Luis Suárez and Antoine Griezmann.

The Argentina forward took full advantage of the time and space Dortmund's slack defense gave him, repeatedly dribbling past their helpless defenders to thrill the home crowd.

He took his club-record tally to 613 goals after he set up Suárez, who returned the assist to help Messi make it 2-0 before halftime. Griezmann's goal from a pass by Messi put the game beyond doubt before substitute Jadon Sancho pulled one back for Dortmund.

With 700 games for Barcelona, Messi trails only Xavi Hernández, who made 767 appearances for the Spanish club.

"Seven hundred matches for Barcelona is not normal and neither is what (Messi) did on the pitch," said Barcelona goalkeeper Marc-Andre ter Stegen. 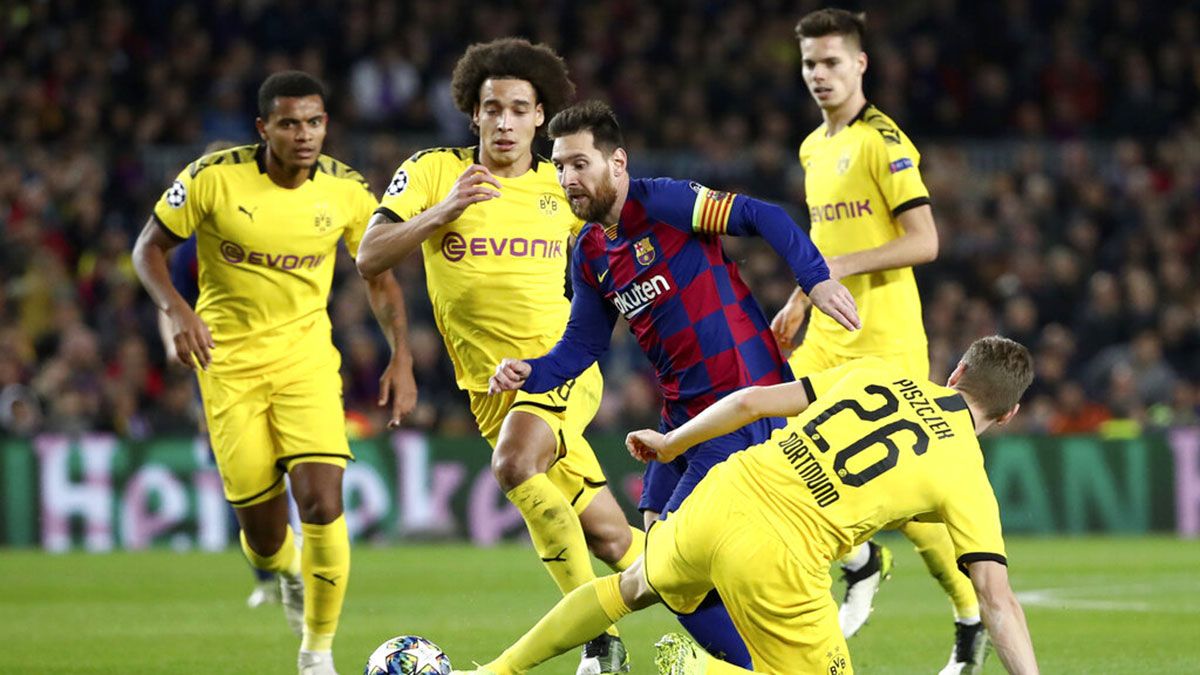 Messi's goal in the 33rd minute let him set another milestone by becoming the first player to score against 34 different opponents in the Champions League. He also went close to another goal when he curled a free kick off the crossbar. Messi has 114 career goals in the tournament.

Barcelona has 11 points in Group F and secured the top spot with one game remaining. Dortmund has seven, but is behind Inter Milan on goal difference after the Italian team won 3-1 at Slavia Prague. Prague has two points.

Only the top two teams advance. The third-place finisher goes to the Europa League.

Ernesto Valverde's team extended its competition record to 35 consecutive home matches without a defeat going back to 2013.

Dortmund had outplayed Barcelona in Germany in their 0-0 draw in September.

On Wednesday, Lucien Favre's Dortmund made a promising start when Ivan Rakitic, who was making his first start in two months for Barcelona, lost the ball and Barcelona needed Samuel Umtiti to clear a shot from Nico Schulz.

But Barcelona had little trouble imposing its will after that.

Barcelona winger Ousmane Dembele had to be replaced with a right thigh injury in the 25th, adding to the former Dortmund player's long list of injuries since joining the five-time European champions three seasons ago.

After replacing Dembele, Griezmann started a move that led to Barcelona's 29th-minute opener. Messi continued it when, instead of firing on goal as the defense expected, he slipped a pass through for the unmarked Suárez to drive between the legs of goalkeeper Roman Burki.

Suárez became the playmaker after Dortmund defender Mats Hummels made a poor pass. Seconds later Suárez found Messi all alone to slot a left-footed shot into the far corner of the net and double the lead.

"Today we take away the feeling that we have played a great match," said Suárez, who said he and Messi combined well through years of experience.

"I have said many times that given the way we get along together, and all the many matches we have played together over the years, I know when he starts one of his runs where I should be to receive the ball," Suárez said.

Favre sent on Sancho to try to spark his team's attack. But he would only get his goal after Messi had helped Griezmann to put the result beyond doubt.

Messi played a perfectly weighted pass to meet Griezmann in stride on a counterattack in the 67th. The France forward did the rest by firing a low shot past Burki.

Sancho's goal 10 minutes later was the one moment of class from Dortmund. The English forward cut back before firing into the top corner. He then forced Ter Stegen into stretching to redirect another of his shots just enough so it met the upright.

"We were not good enough to beat Barcelona today. We only created three or four real chances," Hummels said. "In top form, Messi is the best footballer I have ever seen. Period."