Juventus through to Coppa Italia final after draw with AC Milan

TURIN, Italy — Football finally resumed in Italy in a surreal atmosphere as Juventus drew with 10-man AC Milan, 0-0, on Friday to reach the Italian Cup final on the away goals rule.

The first leg finished 1-1 in Milan before the coronavirus forced the season to be suspended on March 9.

Napoli hosts Inter Milan in the other semifinal second leg on Saturday.

The final will be on Wednesday in Rome.

Cristiano Ronaldo missed a penalty and Juventus dominated, although quality was clearly lacking in both teams following the lengthy hiatus. 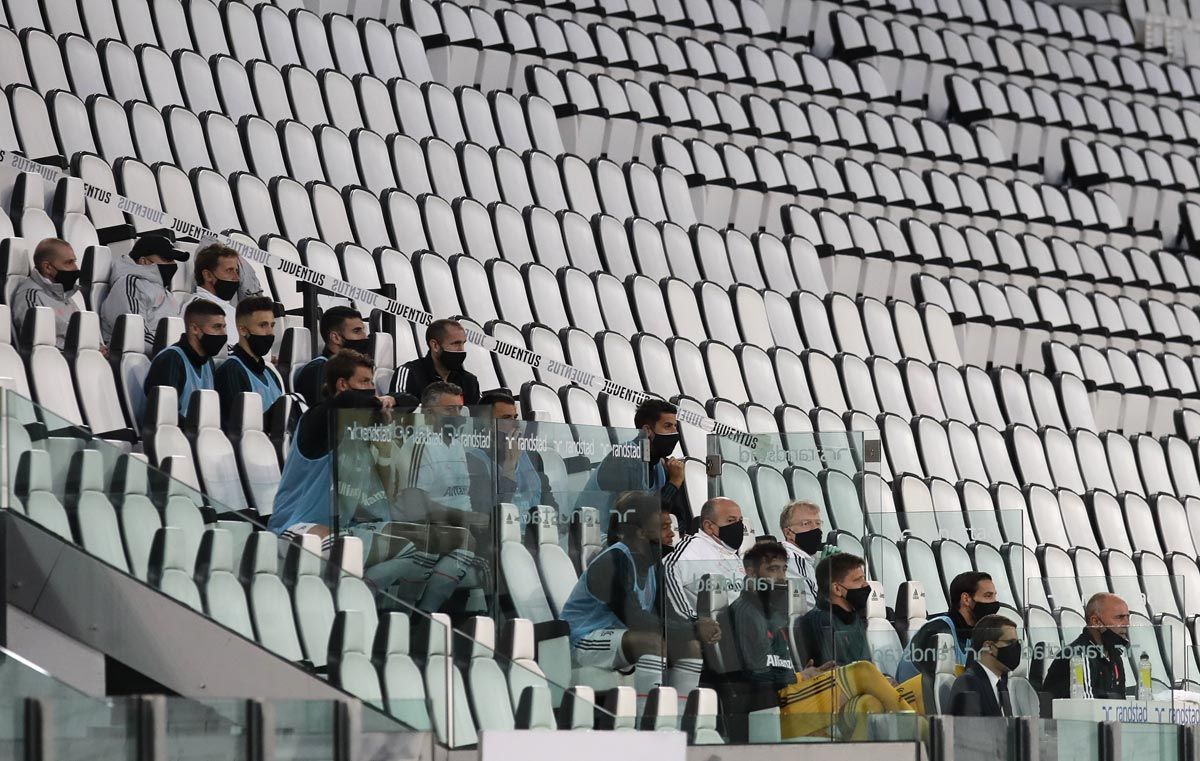 Juventus subs and coaching staff sit in the stands before an Italian Cup second leg match against AC Milan at the Allianz stadium, in Turin.

Neverthless, Juventus coach Maurizio Sarri said he felt his team played "the best they have this season" in the first 30 minutes.

"Starting again is hard and doing so without fans is an enormous difficulty," Sarri added. "The physical condition can't be anything but a medium-low level after a break of 70 days on the sofa, because this isn't a summer break, it's something much more devastating on a physical level and on a mental level.

"And then in moments of tiredness during the match you can't count on the support of the fans to lift you up. But we managed to achieve our goal."

Exactly 100 days after they were meant to play, the teams took to the field in Turin. Just as for every previous home game, the Allianz Stadium announcer introduced the home team with a booming "Ladies and gentlemen ... Juventus Football Club."

Only, this time, there was a resounding silence.

The catchy Juventus anthem which is normally sung enthusiastically by 40,000 fans holding their scarves above their heads was played loudly over the tannoy, but also greeted by silence.

Juventus and Milan walked out separately into the eerie setting and, somewhat ironically, held a minute's silence for the more than 34,000 known people who have died from COVID-19 in Italy. That was immediately followed by applause for healthcare workers. 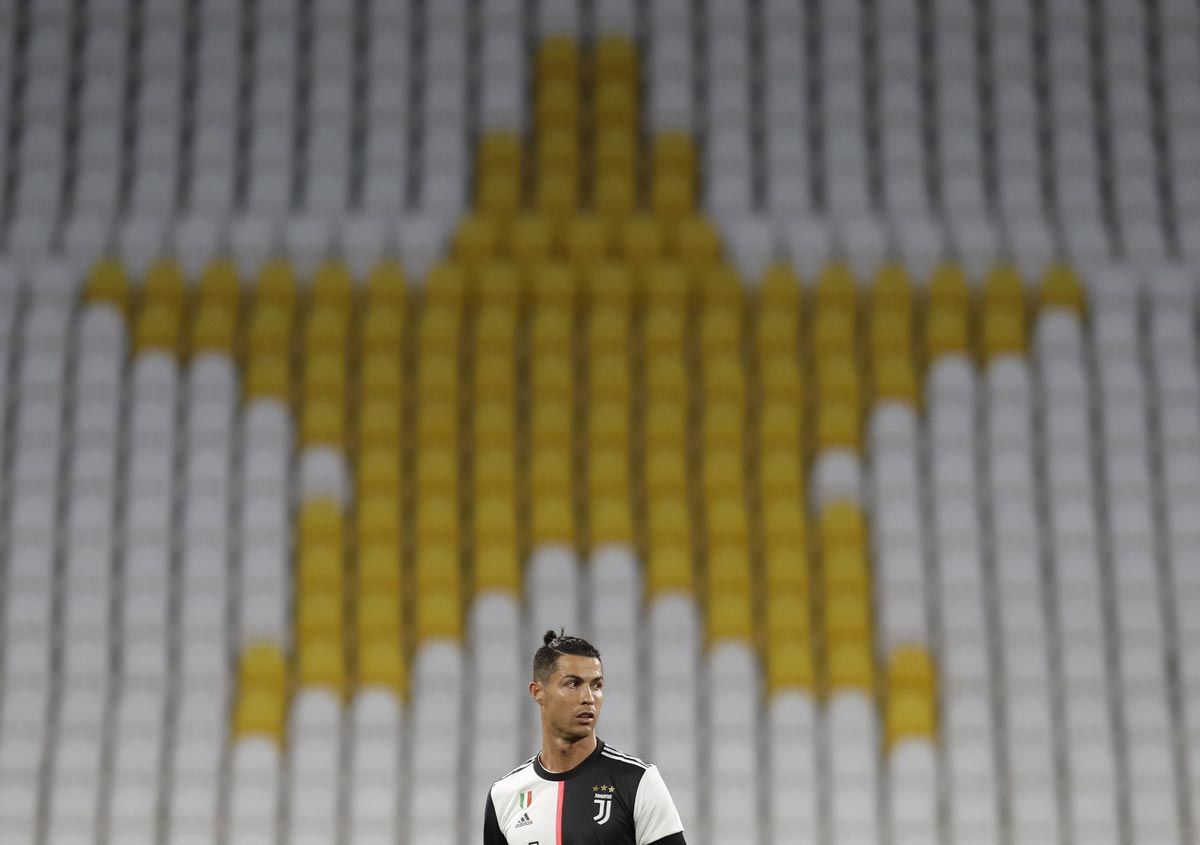 There was also a show of support for the Black Lives Matter movement: Milan's warmup jerseys bore the words and Juventus wore ones with the words "No racism."

New rules limit the maximum number of people in stadiums to 300, including the teams, officials and media. The absence of fans meant the players' voices could clearly be heard and they echoed inside the cavernous stadium, as did the applause and jeers from the team benches, most noticeably for the penalty incident in the 15th minute.

The penalty was awarded on video review for a handball by Andrea Conti. Cheers from the Juventus bench turned to groans as Ronaldo fired the spot kick onto the base of the left post.

The Milan bench loudly celebrated but, before they could even retake their seats, they saw forward Ante Rebić sent off for a high challenge on Juventus defender Danilo.

Milan had struggled beforehand and, with the dismissal of Rebić, lost its only real goalscorer. Zlatan Ibrahimović was absent through suspension. 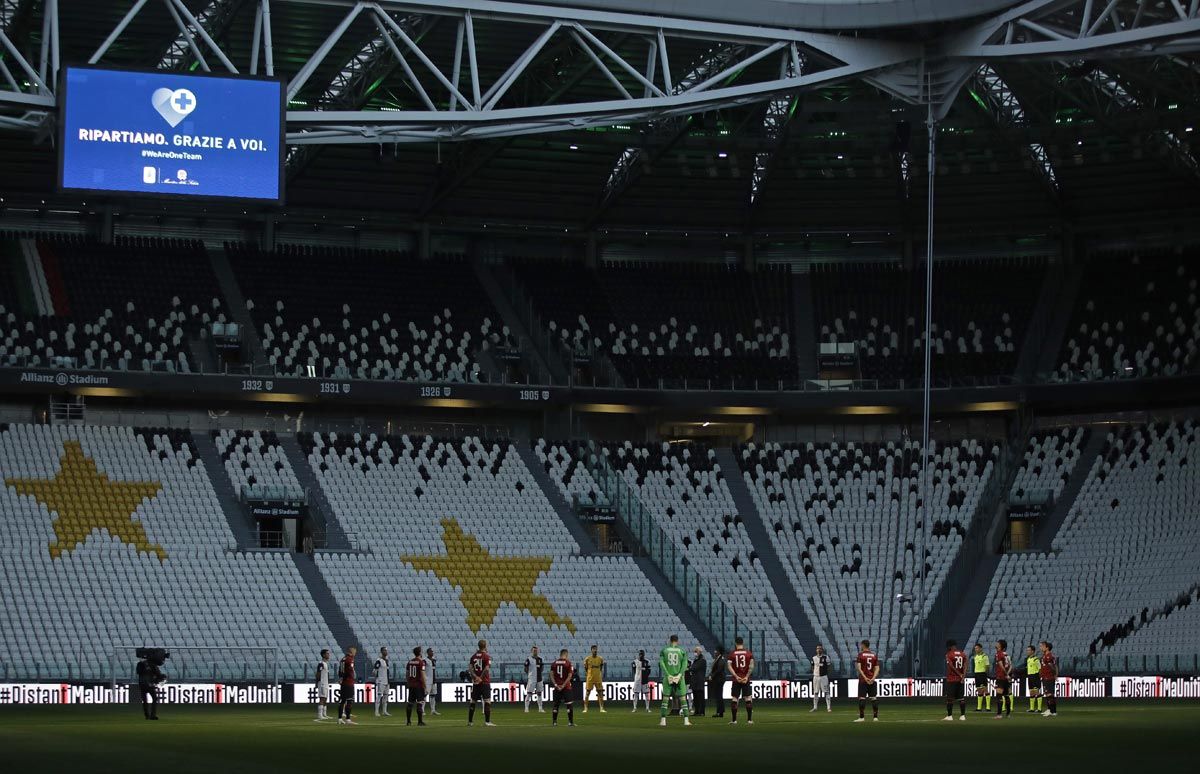 Juventus and AC Milan players observe a moment of silence for the victims of coronavirus.

There was a heightened level of security outside Allianz Stadium but, on a drizzly night in Turin, there were a handful of fans to welcome the Juventus team bus, including one supporter who had driven from Bergamo, nearly 200 kilometers (120 miles) away.

"I wanted to see the team a bit, seeing as it's been four months that we haven't seen them. To give my support from outside," 47-year-old laborer Massimiliano Balduzzi said before leaving to watch the match in his hotel room.

"Unfortunately we can't go in because of everything that's happened. Let's hope they open the stadium as soon as possible, I see it as being hard but we all need to have patience."

After the cup final, Serie A will restart on June 20.