LONDON — A moment that prepared Aleksander Ceferin for the stresses and tensions running European football came three decades ago, in a far graver moment for the continent.

The law graduate was relaxing at his family home in Slovenia on June 25, 1991, sitting on the terrace with his parents, brother and sister and their partners when a man approached.

"He said 'Aleksander Ceferin?' I said 'Yes.' He said, 'War has started. You go with us,'" Ceferin recalls. "It was crazy. I was shocked."

Ceferin was conscripted just as his tiny nation, nestled between the Alps and the Adriatic Sea, declared independence from multi-ethnic Yugoslavia. The response from Belgrade was to send in forces to prevent the start of the bloody breakup of the federation.

"It finished very soon, in 10 days, but there was a lot of tension — day and night — and threats and bombs," Ceferin says. "It's an experience that helps you to survive if some people then try to destabilize you."

The president of UEFA brought up the memory in an interview with The Associated Press in relation to the announcement last weekend of a renegade European Super League to rival the Champions League, and the belief he was betrayed by those previously thought to be trusted friends.

"Psychologically, it was such a shock for me," he says from Ljubljana. "Similar to the war. You cannot compare, but both were stressful — the tension was similar."

Ceferin's immediate task was to stop the 12 wealthiest clubs splitting to a closed competition that is the antithesis to European football norms.

Particularly galling for Ceferin was the deception of Juventus. So close was his relationship with Andrea Agnelli, the chairman of the Italian champions, that Ceferin was godfather to his daughter.

As chairman of the European Club Association, Agnelli and the rest of the elite signed on two Fridays ago to expand the Champions League from 2024 to fend off threats of a Super League split. By the following morning, however, Ceferin's concerns resurfaced that Agnelli would renege on his commitment to stick with UEFA's competitions.

When Agnelli stopped returning calls as he drove from Slovenia to Switzerland, Ceferin's worst fears began to crystallize.

"The worst day was Saturday, because then I realized that it was a pure betrayal, that some people lied to us for years," Ceferin says. "It was quite strange because I didn't know what exactly will happen the next day."

By Sunday, the Super League plan that first leaked in January was being activated by 12 clubs.

"I got a phone call from three or four clubs saying, 'We are terribly sorry, but we have to say otherwise we are out,'" Ceferin says.

Emergency meetings were held by the English, Spanish and Italian leagues, whose showpiece competitions would be wrecked by the severing of a link to placings to European qualification. The English Football Association leadership contacted the administration of Prime Minister Boris Johnson to seek help to keep the national game intact.

The response was a joint statement by UEFA and the leagues and federations in England, Spain and Italy warning the "cynical project" would be repelled with legal action. Any clubs joining a breakaway would be banned from playing in existing competitions. So the largest contingent— six English clubs — would be expelled from the Premier League and their players unable to represent their countries.

But the group dubbed the "dirty dozen" by Ceferin still launched their Super League late Sunday with a website scant on detail — particularly on women's football — and a logo roundly derided for its cheap look.

Ceferin was enraged. Pushing ahead with a planned briefing on the new-look Champions League, he lambasted the "snakes" at rebel clubs, particularly upbraiding Manchester United vice chairman Ed Woodward and "liar" Agnelli. 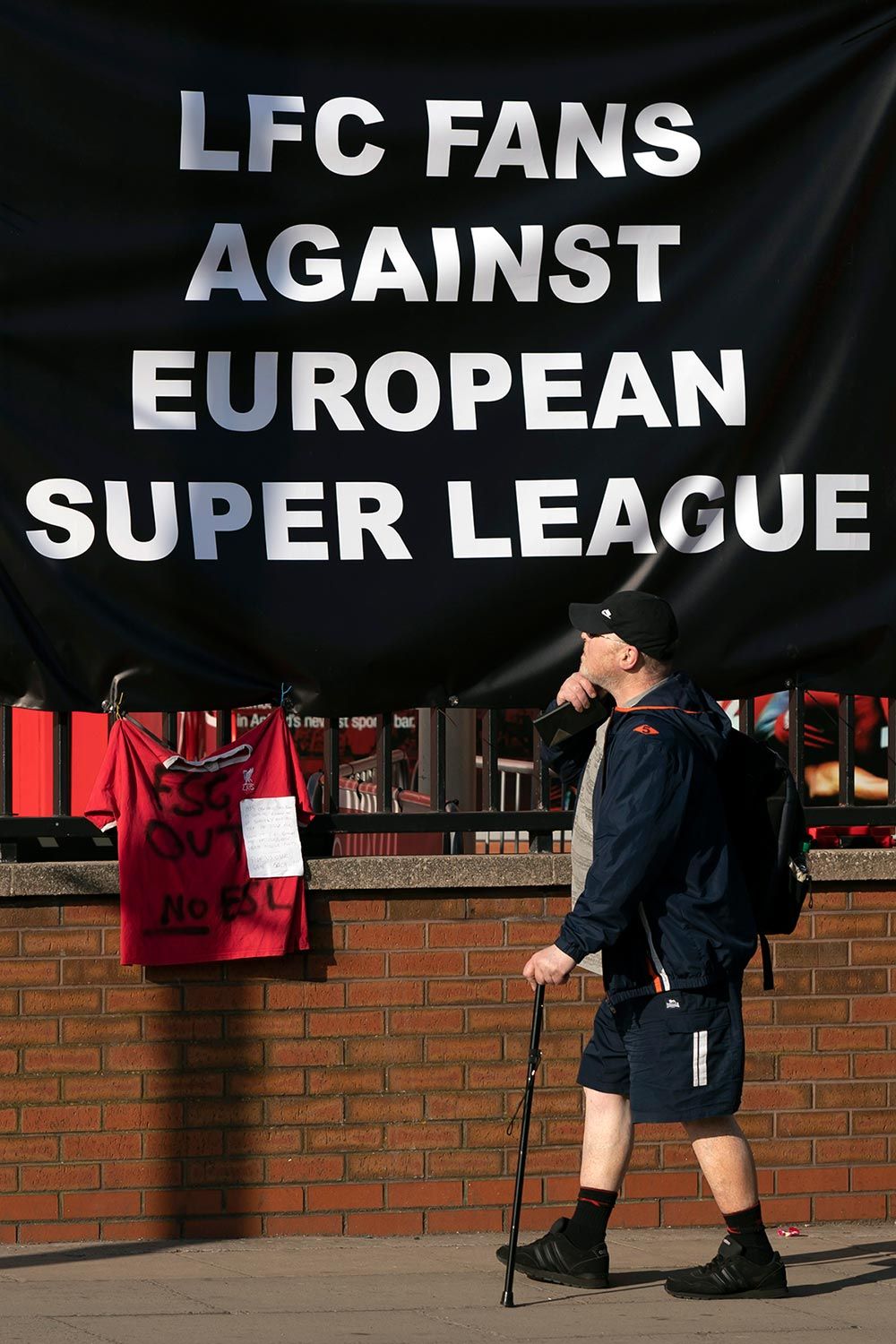 A banner outside Liverpool's Anfield Stadium protesting the formation of the European Super League.

Such personalized, cutting rhetoric isn't unusual for Ceferin since being elected UEFA president in 2016. Notably in 2018, Fifa leader Gianni Infantino was targeted for Club World Cup expansion plans. Ceferin attacked the pursuit of "selfish endeavors" by trying "to sell the soul of football tournaments to nebulous private funds."

Ceferin wasted little time in trying to thwart the Super League before UEFA was dragged through lengthy legal challenges. He was helped by Johnson threatening to introduce laws in Britain to stop an anti-competitive Super League, and by support for the Champions League from Liverpool manager Jürgen Klopp and the Premier League champion's players.

Fan protests swelled in England and Ceferin detected cracks showing in the Super League alliance. With a UEFA Congress of the 55 European football nations to address in the Swiss resort town of Montreux on Tuesday morning, Ceferin singled out the Premier League owners in a direct appeal to see sense.

"Gentlemen, you made a huge mistake," Ceferin said. "Some will say it is greed, others (will say) disdain arrogance, flippancy or complete ignorance of England's football culture. It does not matter. What does matter is that there is still time to change your mind. Everyone makes mistakes."

The only public pronouncement by this point from an English club advocating the project was a 41-word statement from Manchester United co-owner Joel Glazer which was also posted on the websites of Premier League rivals joined in the Super League: Manchester City, Liverpool, Arsenal, Tottenham and Chelsea.

Of the participants, the only owners who even occasionally speak publicly to media are Arsenal's Stan Kroenke and Liverpool's John Henry. Not even with billions of dollars to be earned from getting the Super League over the line would they front a lobbying campaign to advocate the new competition.

Had the Super League been launched a week earlier, British politicians would have been hindered in mounting a counterattack as ministers conducted no media interviews during the period of national mourning leading up to Prince Philip's funeral.

But the British government was able to ride a wave of populism in advancing fan concerns and propelling the Super League resistance to the top of the political agenda. The sense of distance from their clubs by supporters has been intensified by the pandemic keeping them out of stadiums. Now they felt locked out of decision-making by their clubs that was transforming the football landscape. 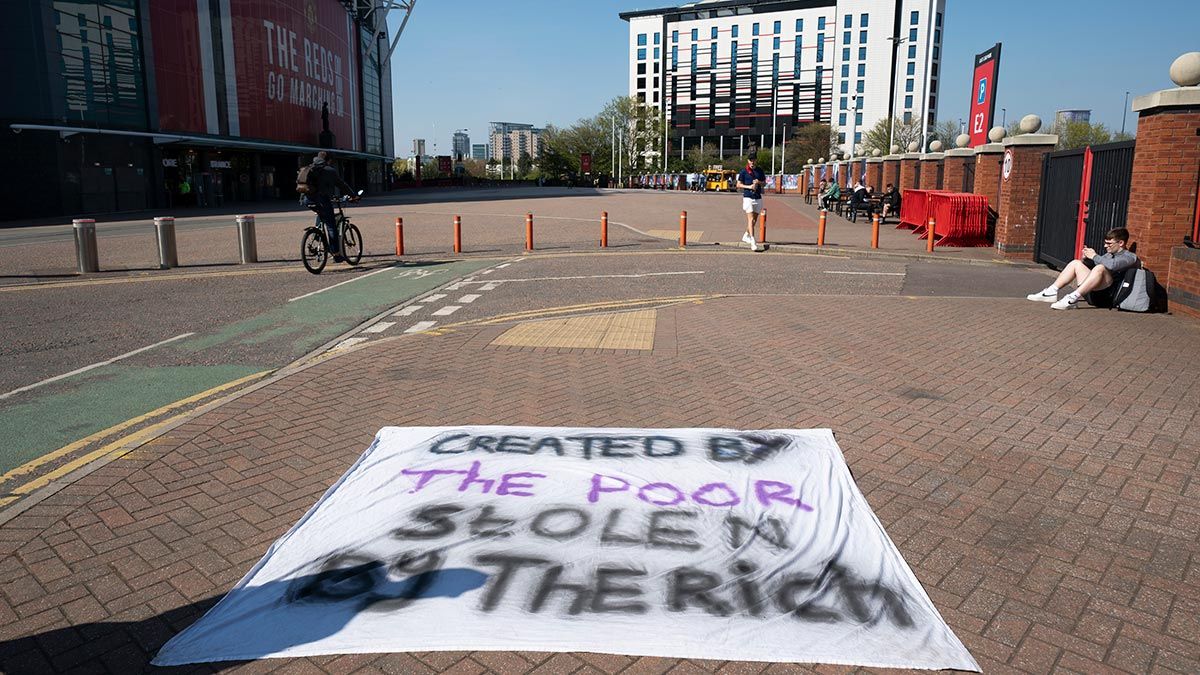 As Chelsea supporters flooded the streets around Stamford Bridge ahead of Tuesday night's game against Brighton, the Super League started to fall apart. The AP reported the Roman Abramovich-owned club was preparing to abandon the Super League.

It took almost three hours, though, for an English club to make it official, and Abu Dhabi-owned Manchester City was the first. A year after UEFA tried unsuccessfully to ban City from the Champions League for breaching financial regulations, now the team was being hailed by Ceferin as "a real asset for the game."

By the end of the night, the Super League had been deserted by all of the English clubs — some with groveling apologetic statements — and the breakaway threat melted away as Ceferin drove back to Slovenia.

The rebellion was crushed by the fans' resistance.

"Football can start or stop wars," Ceferin told Slovenian TV late Wednesday. "Football can trigger extraordinary social shifts and I was convinced that, especially in England, fans will not cave in."

By the end of the week, four clubs were still clinging on to the Super League that blew up on launch. Rambling interviews given by Real Madrid president Florentino Perez symbolized a bungled strategy.

"It's crystal clear that the clubs will have to decide if they are Super League or they are a European club," Ceferin told the AP. "If they say we are a Super League, then they don't play Champions League, of course."

It is a demand for Madrid, Barcelona, AC Milan and, particularly, Juventus to publicly accept defeat and give up on the Super League to stop the threat resurfacing.

Revenge isn't on Ceferin's mind but suspicion will linger about the motivations of the clubs he encounters.

"I still think that I will trust people because the ones that I was sure about didn't betray me, except Agnelli," Ceferin says. "The others, I doubted all of them, all the time."

How, though, to heal the rift with Agnelli, whose daughter Ceferin is godfather to?

"There is no more relationship," he says. "And there will never be any relation anymore."