THE Hong Kong Football Association (HKFA) said on Friday it has already submitted to Fifa the result of its initial investigation on alleged racist abuse on Team Azkals and its fans during a friendly in Hong Kong last week.

The HKFA also acknowledged that the world football body has made a "request for information" regarding the incidents that marred the friendly, which became the subject of a complaint by the Philippine Football Federation.

HKFA said it has also furnished the Philippine Consulate in Hong Kong a copy of the still classified document but is not making the result of the probe public "to avoid prejudicing the process and outcome of a full investigation."

In a two-page statement released to Spin.ph by HKFA public relations head Benny Chan, HKFA said it is taking the necessary steps to prevent a similar incident from happening in the future regardless if Fifa decides to launch a probe on the incident or not.

Saying such incidents are a first for a country "with a long-standing reputation of having passionate but decent football fans," HKFA said the behavior that became the subject of a PFF complaint may have been committed by a "small minority of people."

“The HKFA is fully supportive of the latest Fifa resolution on the fight against racism and discrimination,” it said in the statement. “No amount of political tension or provocation or frustration can justify any incidence of racist or discriminatory behavior.”

At the same time, the association vowed to take action to prevent such incidents from occurring in the future, including the designation of Anti-Discrimination Officers in the stadium, segregation of opposing spectators, and a stern warning to fans who will disrespect the national anthem and supporters of visiting teams.

“The HKFA will not tolerate any acts of racism or discrimination from spectators, players, coaches, or administrators, and will take the appropriate action against the offenders,” added the statement.

It also stated HKFA will participate willingly and diligently cooperate in an investigation by Fifa if any and will comply with and respect any ruling made by the world governing body for football.

Below is a copy of the HKFA statement: 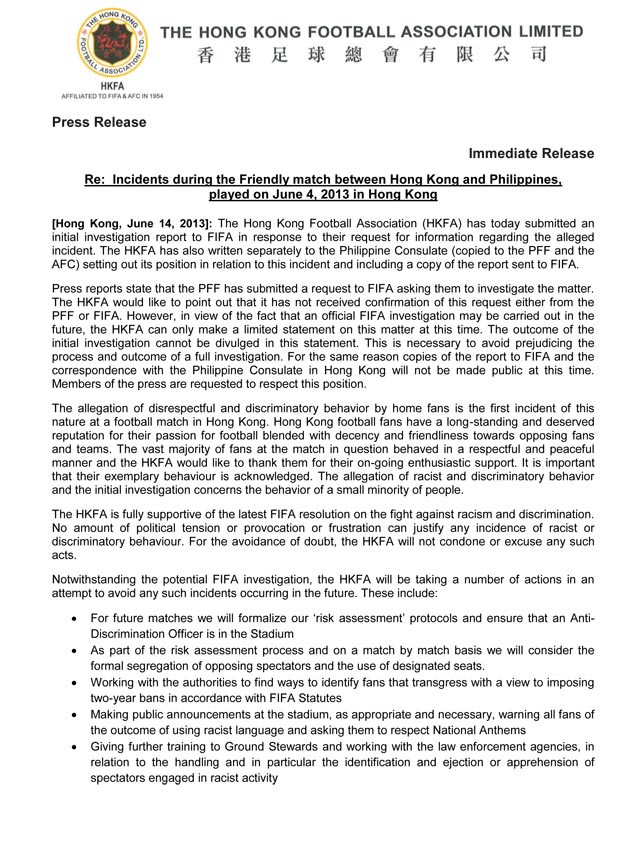 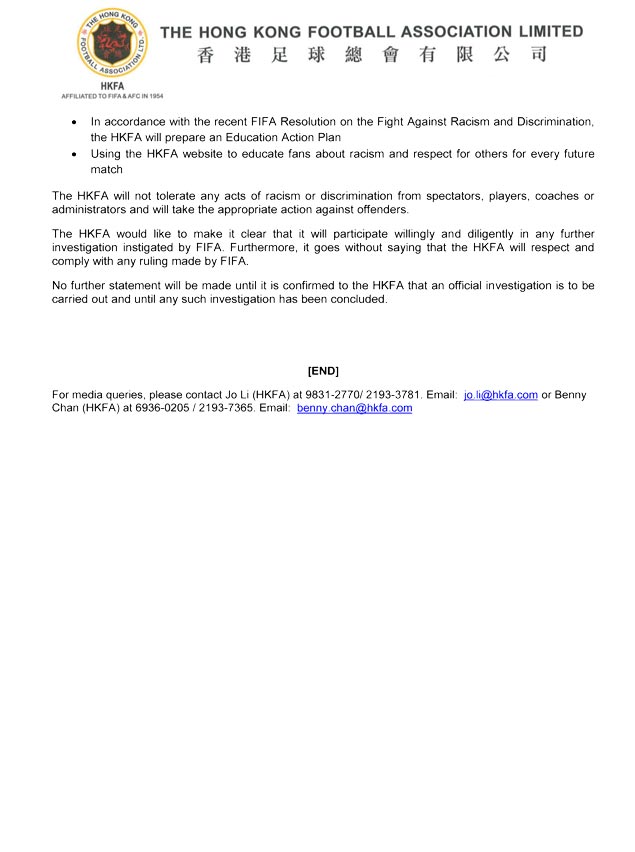