The Brazil-Argentina qualifier on Sunday was interrupted after seven minutes when agents of Brazil's health agency, Anvisa, insisted they should take England-based players Emiliano Martinez, Emiliano Buendia, Giovanni Lo Celso, and Cristian Romero to the airport for breaching coronavirus protocols.

Anvisa said Argentina football officials knew since Saturday that the four players — three of whom were on the field — should not play because they were in the United Kingdom 14 days before their arrival, but did not inform authorities as required. Visitors from the UK must undergo a mandatory 14-day hotel quarantine.

Brazil federal police confirmed to The Associated Press on Monday the four players received a notification to leave the country on Sunday night, and had to give written statements to authorities. They flew with the rest of the Argentina squad to Buenos Aires shortly after. The match was abandoned without a score.

Argentina tweeted on Monday that Martinez and Buendia were authorized to return to England so they could rejoin their club Aston Villa. It did not discuss the situation for Tottenham's Lo Celso and Romero.

"They were first informed Saturday morning about the players entering the country with false information," Campos told SporTV. "We could have deported them at once. But we recommended the quarantine. There was another meeting in the afternoon, same message. And then Sunday morning we saw they had attended a training session.

"We never meant to interrupt the match. We were stopped from acting until the time the match began. Our only goal was to take the players who were challenging Brazilian regulations," Campos added. "The match could have continued, the interruption was a decision by sports executives. Argentina tried to put pressure on Brazilian authorities and chose to leave if they didn't have those players." 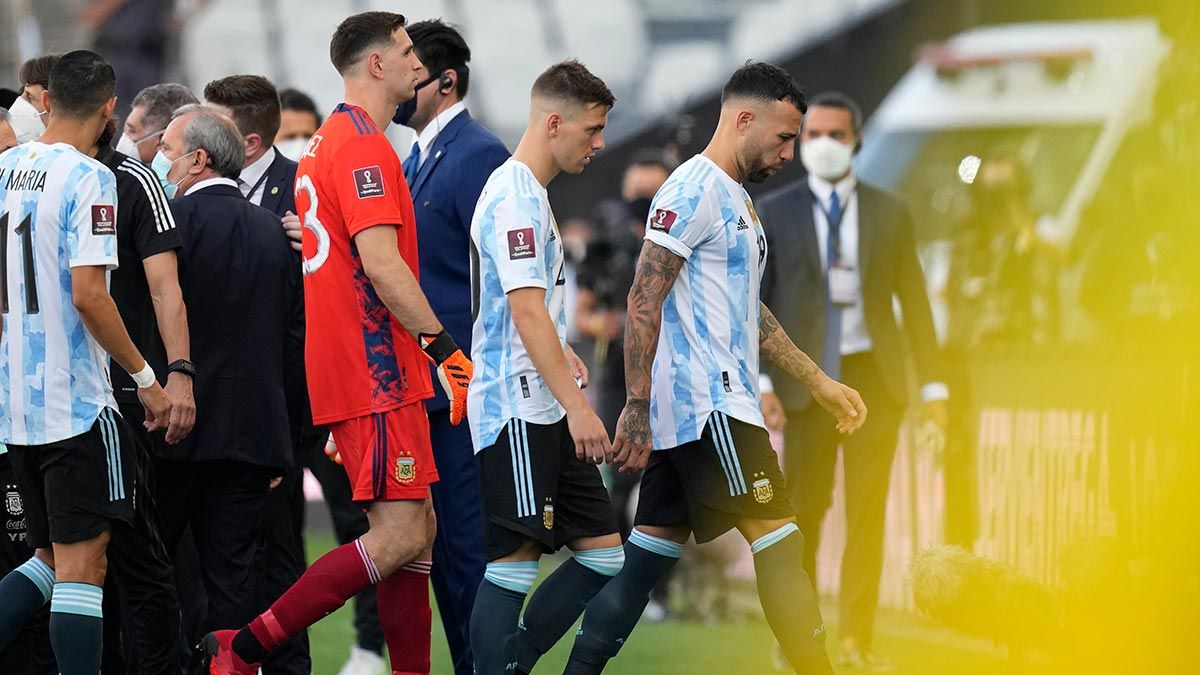 Argentina players walk off the field during the first half of their qualifying match against Brazil.

Campos also said the four players refused to sign a notification of the incident before leaving.

The AP also had access to two documents of the Brazilian Football Confederation dated July 5 and Sept. 2 in which it mentions new government restrictions issued on June 23 for travelers who were in the United Kingdom two weeks before their arrival.

The documents were addressed to José Astigarraga, the secretary-general of South American soccer body CONMEBOL, with copies to the Argentine and Peru soccer bodies. Brazil is to play Peru on Thursday in another World Cup qualifier.

Brazil's soccer body, the CBF, later said in a statement it "followed its institutional role as host entity of the match by informing all those involved about the health legislation in place" in those documents. It also said it sought to "promote an understanding among the entities so health protocols could be complied with for the match to take place."

The AFA said in a statement that it followed all health protocols. The squad arrived in Brazil on Friday morning from Caracas, where the team beat Venezuela 3-1 the night before.

FIFA has also started an investigation. It said it has received official match reports and has passed them on to disciplinary bodies. No date for a decision has been offered, nor a date for a rematch. FIFA added it "regrets the scenes preceding the suspension of the match."

The arrival of the health officials on the pitch caused chaos, as arguments broke out for several minutes between the authorities, football officials, players and coaches at NeoQuimica Arena. Argentina decided to leave for the locker room, where the team stayed for hours. Brazil stayed on the pitch to train. The referee eventually suspended the qualifier.