A FORMER Philippine men’s football team standout has lamented the 'disgraceful' preparation for the country's maiden hosting of the Asean Football Federation Suzuki Cup this year.

Anton del Rosario took to social media to air his thoughts on the matter, taking a dig at the people behind the historic hosting and how it was built up.

“(It’s) crazy seeing the preparation and promotion for Suzuki Cup,” the former Azkals defender said. “We’re hosting the biggest tournament for the country and there’s been nothing. This has to be a joke! I thought they’d turn around and push it this month but nothing.”

“Not on flier, no commercials, billboards or even radio plugs,” he added.

The Philippine Football Federation (PFF) has known the country will co-host the group stage of Southeast Asia’s most prestigious football tournament along with Myanmar since 2013. The country’s hosting bid hit a snag early this year owing to stadium capacity issues before the AFF gave the right back to the Philippines last March.

Del Rosario cited the defending champion Thailand team training on an unkempt field at University of Makati and the Philippine side training on artificial turf at Mckinley Hill Stadium at one point for matches to be played on grass at the Philippine Sports Stadium.

“Welcome to the Philippines. Thailand enjoying the pristine condition of the ‘carpet’ that is UMak. Are they actually wearing boots?” the caption of the photo read. 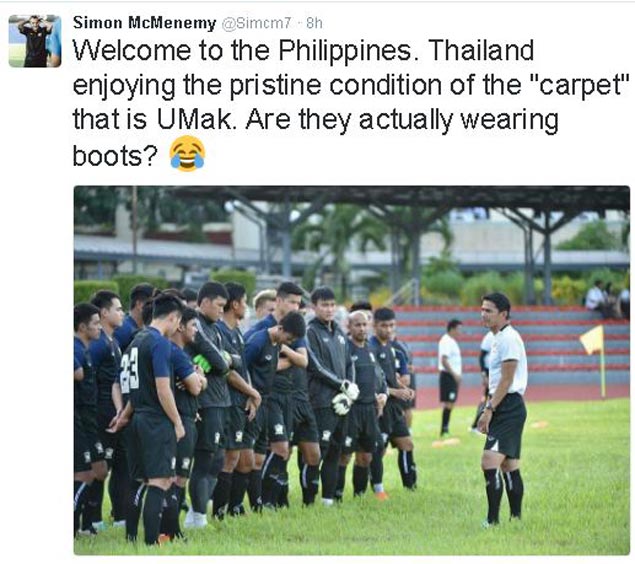 Del Rosario was a key part of the 2010 team that made waves in the Suzuki Cup that year and sparked the football renaissance in the country.

“Hosting this tourney is a dream and was a dream of for us older guys who helped along the way,” the outspoken 34-year-old booter said. “It has all (been) taken for granted and is unacceptable.”

“This is an opportunity to help bring back awareness and support for the sport which was lost in recent years. To see them take this opportunity and throw it away is a disgrace,” he added.