THE ‘Beautiful Game’ is helping win the war for the hearts and minds of the children of Mindanao with the help of the First Kick for Peace Foundation.

During the formal launch at the Club Filipino in Greenhills, San Juan City over the weekend, partners from the private sector look to assume a bigger role in helping an initiative by the Philippine Marine Corps in using sports—football, in particular—to help children in conflict-stricken areas in Mindanao.

Foundation president Rookie Nagtalon said much has transpired since 2011 when some off-duty jarheads from Marine Battalion Landing Team 3 in Sulu decided to play football in their camp to pass the time, which in turn attracted kids who learned more than just kicking a ball between goal posts.

Inspired by what he saw, Lieutenant Colonel Stephen Cabanlet launched the PMC Football for Peace program that aimed to capture the hearts and minds through football.

“We found that football is a good medium to impart value formation, character building and discipline to children who in circumstance were at risk of taking up arms when they grew older,” said Cabanlet who also formed a character development program that teaches young people concepts such as teamwork and the love of God.

Now the Army and the Marines have been teaching kids in 11 provinces through the program. Every April, around 60 children from the different conflict areas are brought and hosted by Marines and various sponsors to experience Manila, many of them for the first time. The program also started a fledgling educational scholarship for promising elementary and high school students.

Nagtalon sees their expansion to community development since they have evolved from a movement to a foundation but with using the same pillars: values formation, character development, and sports and discipline. The foundation would help consolidate financial and other forms of assistance from the private sector to support the efforts of the soldiers.

“All successful initiatives are done in threes. The reason we became successful: the military, the community and add the private sector component, us and our partners. When we go into an area, everyone is present and then it becomes successful,” Nagtalon told SPIN.ph during the launch.

Present at the gathering were ambassadors and stakeholders as well as senior Marine officers led by their commandant, General Emmanuel Salamat and a number of government officials .

Also in attendance was Olympic silver medalist Hidilyn Diaz, herself a member of the military as an Airwoman 1st Class in the Philippine Air Force and also a native of Mindanao. 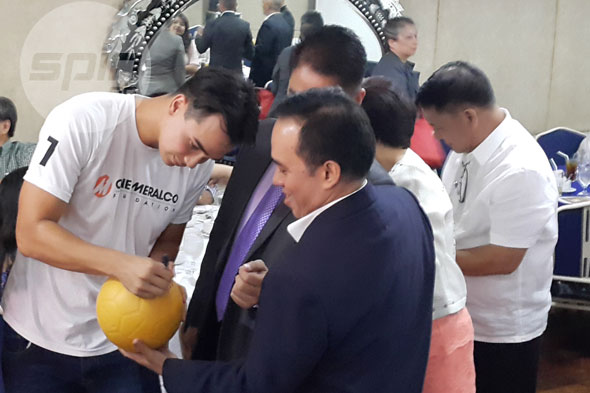 Part of the program’s success was also due to the involvement of the Meralco Sparks led by James Younghusband. And One Meralco Foundation president Jeffrey Parayao even shared plans to bring the team to Sulu or Basilan this year.

“The ownership on our side has grown from a purely corporate social responsibility perspective. For us and the Meralco Sparks, we have ‘owned’ the program and now the foundation depends on the kind of engagement now with First Kick for Peace Foundation.”

Parayao said the program has also impacted the life of their coaches and players who have embraced the call to help.

“Their perspective of what Mindanao is has changed. We have celebrity players on the team such as Phil and James Younghusband and we have young people looking up to them. When you see them training with kids in Mindanao then they can positively influence all the other perception in the area,” he said.

Keynote speaker Assistant Secretary Dixon Hermoso understands this impact all too well as he has first hand experience in how sports and the arts can help foster peace.

As a commander of an infantry battalion, Hermoso shared how he also organized a football event and remembers it was a sight to behold, former adversaries fighting with a ball instead of bullets.

”As part of the Philippine Army, I thought the solution was shooting each other. But there are other ways. And sports is one of them,” he said.