ROME — Two years after failing to qualify for the World Cup, Italy's turnaround could not be more emphatic.

The Azzurri overcame Greece's defensive tactics for a 2-0 win Saturday (Sunday, Manila time) and qualified for the 2020 European Championship with three matches to spare.

And qualification comes with quite a bonus: Italy is now assured of playing in the opening match of next year's tournament at home in Rome in June.

"We haven't really achieved anything yet but let's enjoy this moment," coach Roberto Mancini said. "We should be happy with the way the squad is playing. Italy still needs to work a lot to improve. But there's not such a big gap from the big European squads."

Brazilian-born midfielder Jorginho converted a penalty after the hour mark after a blatant handball by Andreas Bouchalakis. Then substitute Federico Bernardeschi scored from outside the area with a low, bouncing shot that was deflected. 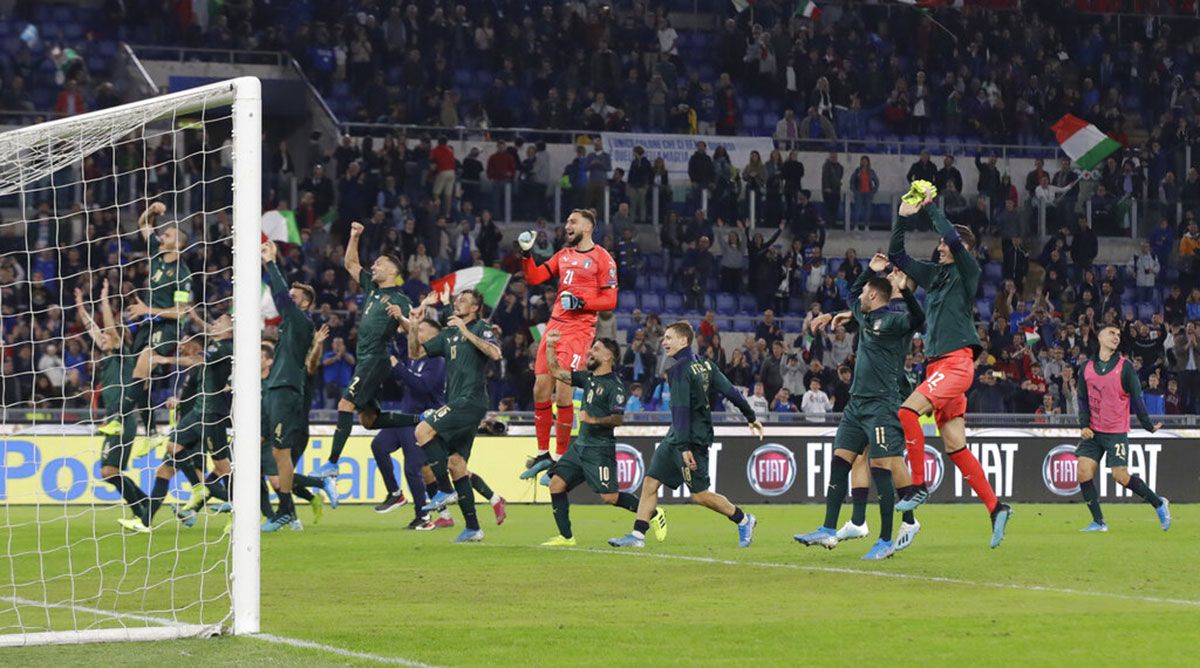 Italy extended its perfect record in Group J to seven wins in seven matches. Add in a friendly victory over the United States last year and the Azzurri are in position to match the national team's record of nine straight wins set under Vittorio Pozzo in the 1930s by beating Liechtenstein on Tuesday.

"I appreciate the comparison but Pozzo is a legend because he won two World Cups, not for a run of nine straight wins," Mancini said. "It was great to see the (Stadio) Olimpico full like this and we hope it will be even more magical next June."

It was nearly two years ago that Italy lost a playoff to Sweden and failed to qualify for the 2018 World Cup — leaving the four-time champion out of soccer's biggest tournament for the first time in 54 years.

"The most important thing is that the fans have rediscovered their enthusiasm for the Azzurri," Italian soccer federation president Gabriele Gravina said. "We're definitely on the right track toward recovering what was lost in recent years."

Italy has a full 21 points, nine more than second-place Finland. The top two teams of each group advance.

Greece, which has five points, had already lost hope of qualifying.

There were nearly 60,000 fans at the Stadio Olimpico in anticipation of the qualifying celebration but they were kept quiet for much of the night as Greece defended in large numbers.

The visitors produced the only shot on goal of the first half while Italy was temporarily playing with 10 men due to a knock to left back Danilo D'Ambrosio. Goalkeeper Gianluigi Donnarumma made a one-handed reflex save on a dangerous effort from Dimitris Limnios.

Things got worse for Italy when winger Federico Chiesa, perhaps the Azzurri's best performer over the course of qualifying, limped off before the break with an apparent thigh issue. Chiesa was replaced by Bernardeschi.

"It's always tough when squads pull everyone back to defend," Mancini said. "We were too frenetic in the first half. We should have patiently moved the ball around to open up spaces. Instead, we attempted long balls and that's no good. It was a much more relaxed second half. We kept focused and achieved our goal."

Italy began to threaten more after the break and earned a penalty when Bouchalakis stuck out his arm to block a shot from Lorenzo Insigne that appeared on target.

Jorginho, who holds dual citizenship, sent goalkeeper Alexandros Paschalakis the wrong way after a nervous buildup to the spot kick as the referee took his time putting the players in order.

Fifteen minutes later, Bernardeschi took a pass from captain Leonardo Bonucci and scored his first Italy goal in more than a year.

Then it wasn't long before the Stadio Olimpico was rocking to the White Stripes' "Seven Nation Army" — the soundtrack to Italy's last title at the 2006 World Cup.