TWELVE young booters from different parts of the country get the chance to impress international scouts when they train and vie for European camp slots this week in Malaysia.

Organized by Globe Telecom, the 'TM Football Para sa Bayan' has already identified players who they will send to Kuala Lumpur this coming Tuesday to engage in a four-day training at the Astro Kem Bola facilities.

The players, aged 9 to 12 years old, were carefully screened from almost 600 participants from tryouts held in Iloilo, Bacolod, Davao and Manila over the last two months.

Among them is Basilan’s Roniel Vincent Delumpines, who travelled 25 hours to Davao just to participate in the clinic, supervised by Green Archers United coach Hans Smit.

Bong Esguerra, Globe director for citizenship, bared that the Philippines was able to send booters to Malaysia through the partnership they established with Astro Kem Bola.

“It’s a partnership and the kids will undergo rigid training there, from basic to advanced technical know-how, plus they will also be given chance to learn more about nutrition and other important aspects of athletic well-being,” said Esguerra.

“But the most important thing is we would want the Filipino football players to be recognized. Astro knows that we’re predominantly a basketball country, but this time, we are sending some of the best young booters and hope they make it to the 36 South East Asians to be given invitations to train in Europe,” he added. 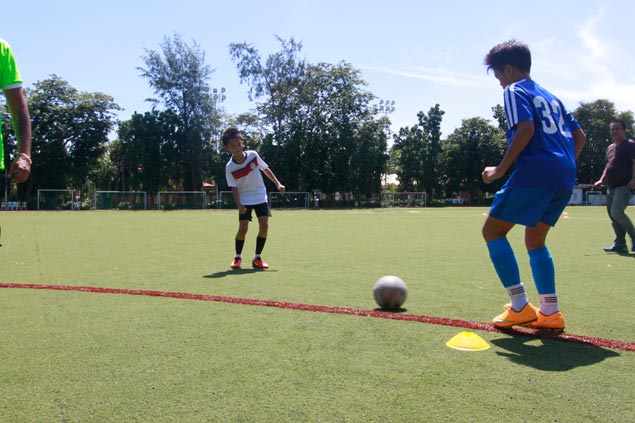 Smit, a football guru in the country for three decades now, is optimistic that their program can send at least eight players to Europe.

“I have high regard for this team. They’re a bunch of poor yet totally determined players. They are hungry for recognition and that will be their ticket to the bigger stage,” said Smit.