BERLIN — Erling Haaland scored the Bundesliga's first goal in more than two months and then celebrated.

The 19-year-old's Borussia Dortmund teammates stayed away, mindful of the strict hygiene measures amid the coronavirus pandemic, as Germany's soccer season resumed in unprecedented conditions on Saturday.

Dortmund beat Schalke, 4-0, in the first Ruhr derby to be played in an empty stadium. Calls and shouts from coaching staff and players, and the thud of the sanitized ball being kicked, reverberated around the mainly deserted stands.

Players had been warned to keep their emotions in check, and to desist from spitting, handshakes and hugging with the games keenly watched by the rest of the soccer world hoping to restart their own leagues.

Team staff, and players who didn't start, wore masks. Substitutes took their positions in the stands, rather than beside the field, while balls and seats were disinfected.

Haaland celebrated his 10th goal in nine Bundesliga games with a restrained dance as his teammates stayed back.

"It's hard," midfielder Julian Brandt said. "But that's the way it is now. We try to stick to the rules."

Brandt set up Raphaël Guerreiro before the break and Thorgan Hazard after it. Hazard celebrated alone in front of the Westfalenstadion's south terrace, where normally the club's "Yellow Wall" of almost 25,000 fervent fans would be standing.

"It felt strange, also for the players. You could see that with the celebrations," Dortmund team coordinator Sebastian Kehl said.

Haaland set up Guerreiro to seal the result as Dortmund cut the gap on leader Bayern Munich to a point. Bayern is due to play at Union Berlin on Sunday. 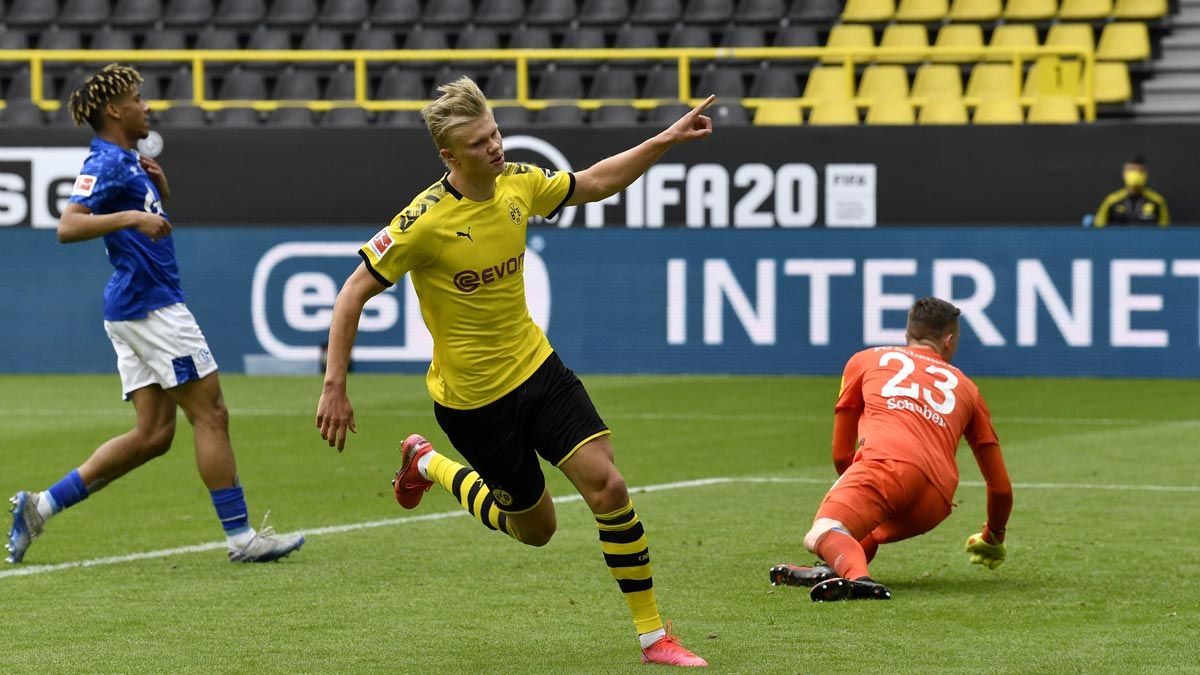 Schalke became the first team to make five substitutions in a Bundesliga game in a new temporary measure allowed in the league, but they couldn't change the outcome. Dortmund's players celebrated in front of the empty south terrace afterward.

"To applaud all our fans who were watching on TV," Kehl said.

"It's quite surreal," Dortmund chief executive Hans Joachim Watzke told Sky TV. "I've received messages from all over the world in the last couple of hours that everybody is watching and then you go through the city and there's nothing going on."

Borussia Mönchengladbach moved third, three points behind Bayern, with a 3-1 win at Eintracht Frankfurt in the late game.

Also: Hertha Berlin won 3-0 at Hoffenheim in coach Bruno Labbadia's first game in charge; Freiburg drew at Leipzig 1-1; Paderborn drew at Fortuna Düsseldorf 0-0; and Wolfsburg won 2-1 at Augsburg, where the home side's new coach Heiko Herrlich was forced to watch from the stands after breaking quarantine to buy toiletries. Herrlich will only return after twice testing negative for the virus.

Celebrations were muted throughout, with only Hertha's players overstepping calls for restraint.

"Goal celebrations are part of soccer. We're tested so often I think they can be allowed," Labbadia said in defense of his team. 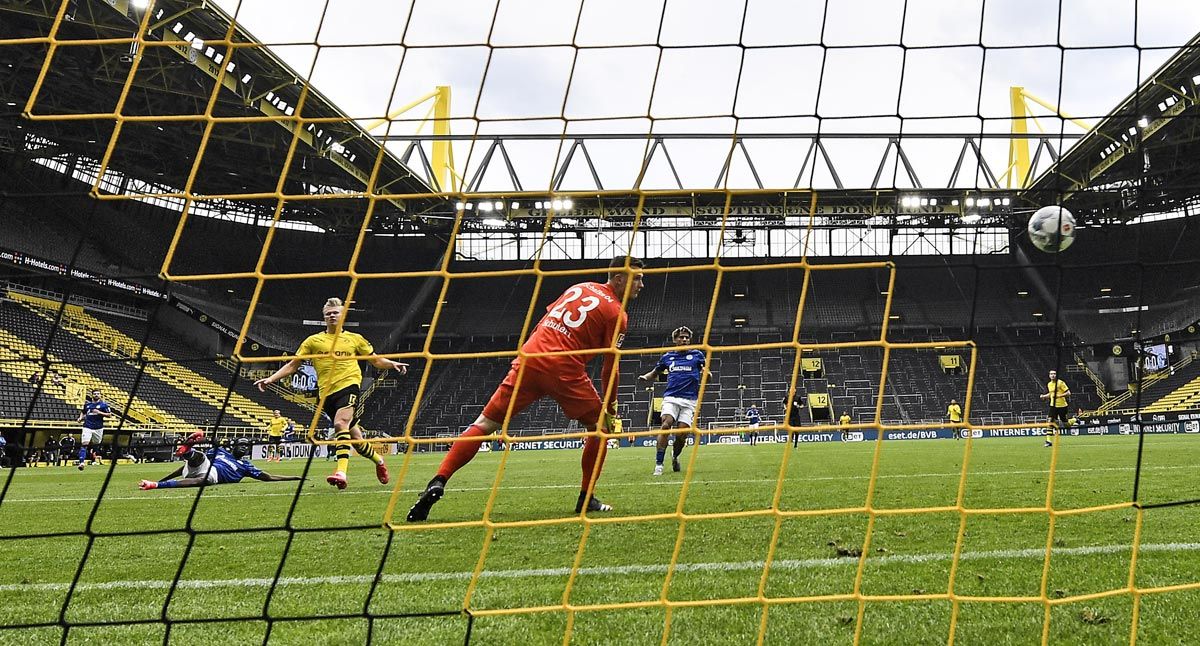 Even though the stadium contained less than 300 people, one of them — a camera operator behind the goal — still managed to be hit on the head by a wayward shot from Leipzig's Ademola Lookman.

Leipzig was grateful to VAR for ruling out what would have been a winning injury-time goal from Freiburg's Robin Koch.

They were the first games to be played in the league since March 11.

Goal celebrations in other games were also marked by fist bumps and elbow-to-elbow touching.

The game's authorities were keen to restart the country's top two divisions with several clubs, including Schalke, facing severe financial difficulties because of the suspension in play.

Numerous polls showed a growing majority in Germany were against the resumption of the leagues. Fans are also critical.

"Soccer without fans is nothing," read a joint statement from several Bayern Munich fan groups after the league decided on May 7 to resume.

Cologne fans accused authorities Saturday of prioritizing money over people's health. A banner at Augsburg's game against Wolfsburg said, "Soccer will survive, your business is sick!"

There was criticism too from players over health concerns and the threat of injury with games now packed into a tight schedule.

Players and staff have been subjected to regular testing for COVID-19. Three cases were found at Cologne, while second-division Dynamo Dresden was ordered into 14 days of quarantine after two more positive results brought its total to three last Saturday. Dresden's game against Hannover on Sunday was called off, and the team cannot train during the quarantine period.