NO ONE would've expected Saudi Arabia to stun Argentina in the World Cup.

With world class veterans like Lionel Messi and Angel Di Maria and up-and-coming prospects like Lautaro and Lisandro Martinez, Argentina had the firepower to prevail against a Saudi squad whose players only competed in their local leagues.

But Saudi's 2-1 victory over La Albiceleste proved that starpower isn't enough to win matches. KSA's defense was key in the match, and coach Herve Renard deserves a lot of credit for his tactical masterclass. 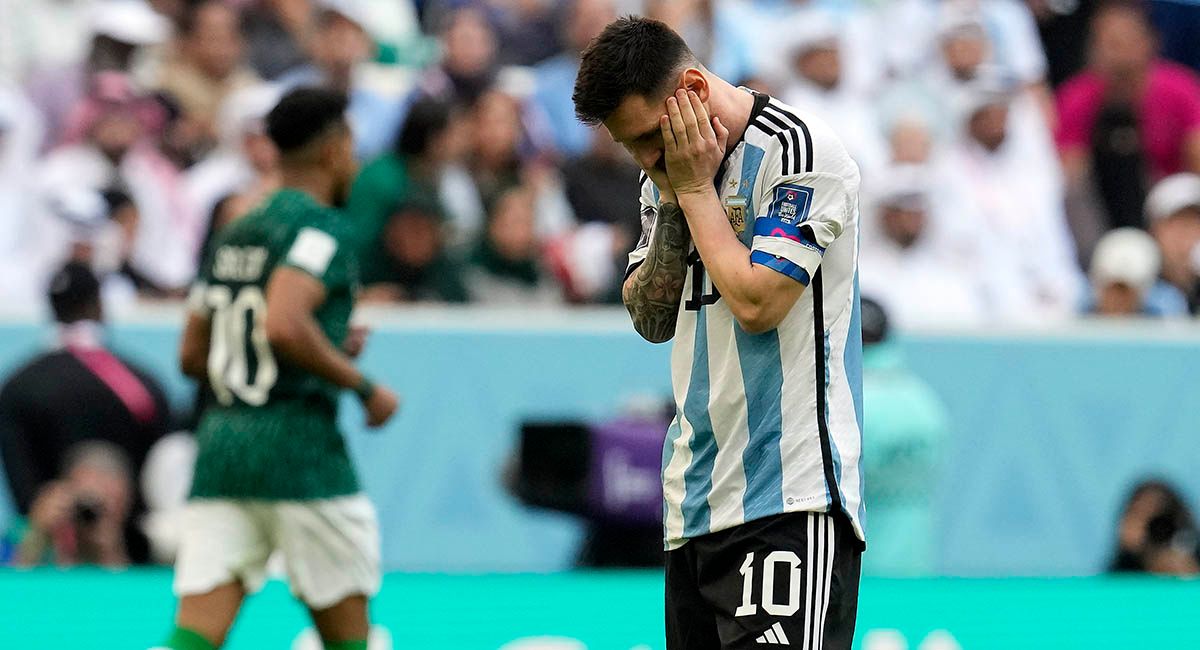 When it came to the build-up phase, one should expect Argentina to dominate possession, and that's exactly what happened, pulling off a very nice 69 percent dominance with the ball. After all, they have technically gifted players like Leandro Paredes, Lionel Messi, and Papu Gomez.

One would have expected Saudi Arabia to go for an extremely defensive approach, hunkering down in deeper areas.

They were defensive, but surprisingly they opted to aggressively, going for the high press and combining it with the offside trap.

While this could be a risky proposition, it made a lot of sense against the Argentinians.

Both Papu Gomez and Lisandro Martinez are well-known for their passing fluidity, able to deliver long ball passes to a runner when needed. To catch this, Saudi Arabia set up an offside trap: 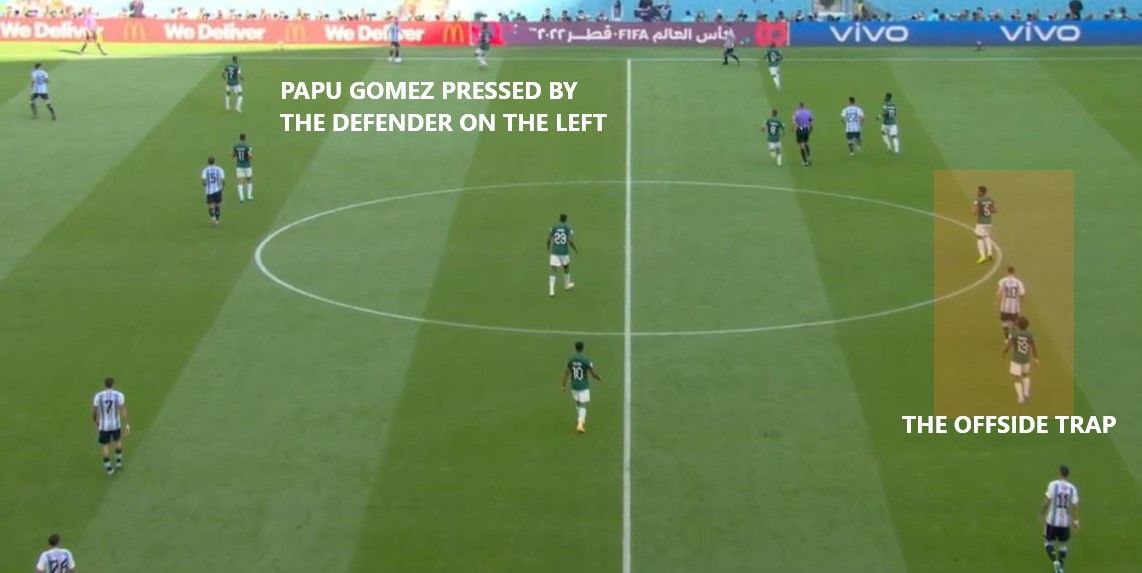 As you can see, Gomez was immediately pressured in order to limit the potential switch to Angel Di Maria. Then you have two last line defenders marking Lionel Messi (#10). Since Gomez has the ball on the left flank, KSA would send their two defenders from the right to advance forward and complement the offside trap. Meanwhile, two defenders marking Messi would move slightly forward to create the offside position.

During the first half, Argentina was caught multiple times with the offside trap ⁠— though it could be argued that some shouldn't have been called in the first place.

But other than the offside trap, there were other methods the Green Eagles did to limit Argentina.

There were moments when Argentina wanted to go for the overload, with Messi and Lautaro would drop deep to support the midfield.

So how did Saudi deal with this? Like we said, the high press was key. And they brought it to extreme levels when the blue-and-white shirts started to move the ball forward.

And to make sure that Argentina's impact with the ball would be limited, Saudi Arabia would force Argentina to stay on one flank.

Beyond the high press and the offside trap, Saudi Arabia's structure should also be commended.

In fact, Argentina couldn't even dictate the match as many predicted as Saudi marked their players well during the buildup. 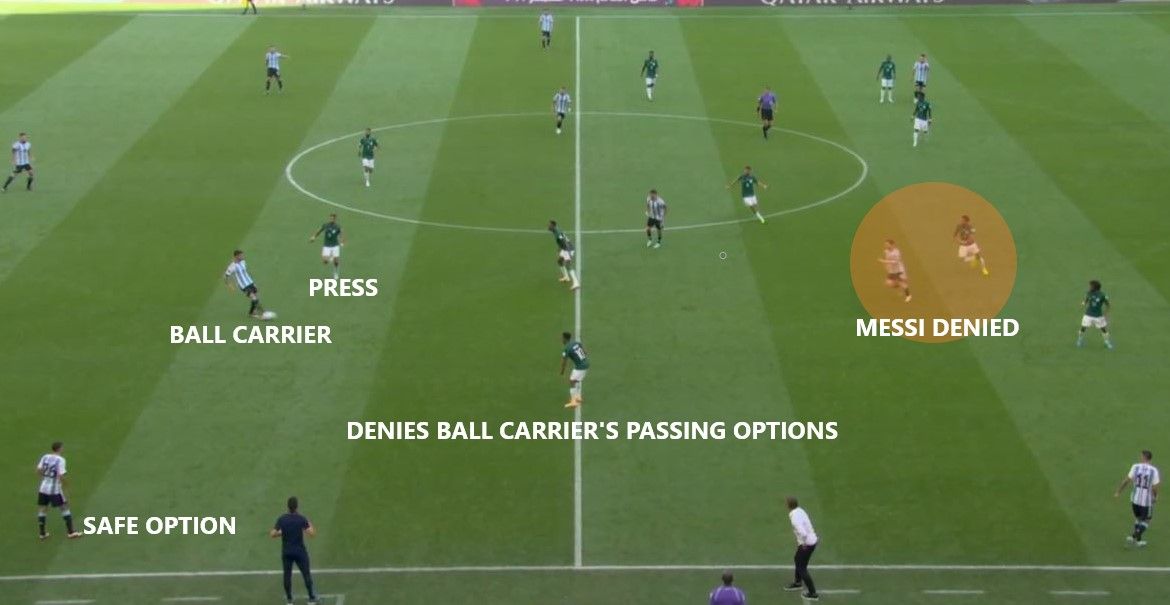 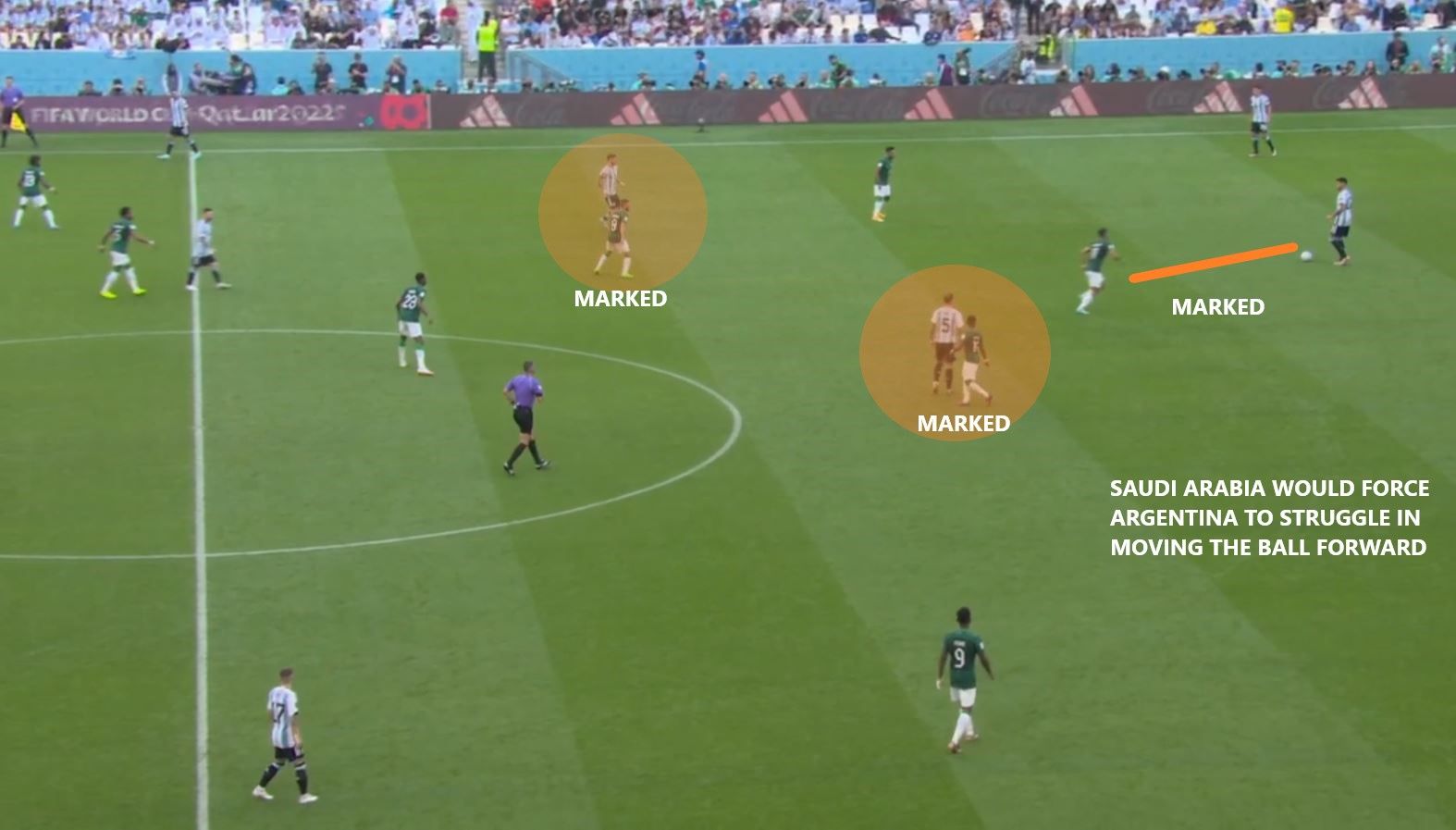 Argentina could have gone for the safest passing option, and that was definitely good news for the Green Eagles as they can reorganize their defensive shape. There were instances when Leandro Paredes was forced to drop deep to allow the full backs to move forward and overload, but, as we explained, this could also be problematic with Saudi's aggressive pressing scheme as they moved the ball forward.

How far will the underdog Saudis go?

While Saudi's 2-1 win is definitely one for the ages, there's still a long road ahead in their World Cup journey. In their group, they still have to face the likes of Poland and Mexico.

Mexico has Gerardo "Tata" Martino who is one of the most progressive tacticians in South America, while Poland boasts the goal scoring threats of Robert Lewandowski. But neither squad boasts the talent that Argentina possesses, giving the Green Eagles a glimmer of hope.

And that hope was further magnified with an impressive display against Argentina, giving them (and even the other underdogs of the tournament) the belief that they can overcome whatever challenges that lie ahead.