WILL “The Mountain” finally reach the top?

Leading the titans for the 41st World’s Strongest Man competition to be held on Saturday is Hafþór Júlíus Björnsson, the actor-athlete who plays the role of 'The Mountain Who Rides' in the popular HBO series Game of Thrones.

'Thor' is undoubtedly the most known among the 30 participants due to his stint with the show. Those who follow WSM know him better for his consistent runner-up finishes ever since he joined the annual contest in 2011. His first attempt merited him a sixth-place finish. He was third in 2012, 2013 and 2015.

In 2014, Thor was a runner-up to Zydrunas Savickas and he had a similar result in 2016 behind the 'Colorado Colossus' Brian Shaw. Another heartbreak came in 2017 when he finished behind champion Eddie Hall. Shaw and Savickas (the Lithuaninan seeking his fifth WSM title) will be among the competitors facing The Mountain in Manila.

“I’ve got to beat the champs to become the champ,” said Björnsson when asked what he think his chances were during the press conference at the PICC on Friday morning.

Aside from his acting chops (he also starred in 2017’s Kickboxer: Retaliation on the big screen) the 6-9 Iceland native also played Division I basketball in his country for four years, with a brief stint in the Under-18 national team, before injuries forced him to change careers.

A total of 30 brawny participants from Europe, US and Africa, who are at least six feet tall and weigh a minimum of 380 lbs., will do battle in selected locations around Manila from April 28 to May 1 during the qualifying round. The finals is set on May 5 and 6.

“For all of you in the Philippines, get ready for a show,” said WSM tournament director Colin Bryce, adding the strongmen will carry tricycles and pull buses, among the challenges facing them.

Organizers said all of the events, to be held from 9 a.m. to 4 p.m., are free of charge to the public. 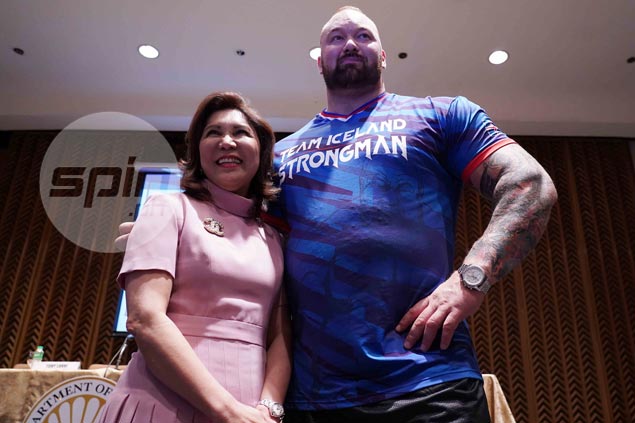 Englishman Eddie Hall, the current WSM champion who announced his retirement for 2018, is also in the country as presentor of the 41st edition of the Department of Tourism-sponsored event, which makes a return to Asia after its Malaysia staging in 2015.

“I was barely 20 years old when the greatest boxing match in the Philippines delighted us in Thrilla in Manila… It’s the first time that this contest of great strength and power will take place in the Philippines and on behalf of your millions of Filipinos, welcome to our beautiful islands,” said Tourism Secretary Wanda Tulfo-Teo, who added that her son, a Game of Thrones fan, even asked her to secure an autographed photo of Björnsson.

Asked why the tourism department chose to host the contest, Teo explained that she is looking to develop the Philippines as a leading sports tourism hub.

DOT Undersecretary Katherine de Castro said the athletes will also help promote various tourism locales that include Corregidor, Bataan, Intramuros, Coron in Palawan and Davao City in the show that reaches an audience of 50 million viewers around the world.

“For all of you in the Philippines, get ready for a show,” exclaimed WSM tournament director Colin Bryce.