Brownouts, bookings: The inside story of BOOM Esports' first-day implosion

As BOOM Esports prepared to take their final game of the DPC Tour II’s regular schedule against Team SMG, SPIN.ph spoke to the man who keeps everything running behind the scenes for BOOM’s Dota 2 squad: team manager Isaac “LANE” Alfon.

While initially interviewed for a different story, we couldn’t let this opportunity pass by to ask what really happened behind the scenes in their disheartening DPC debut.

A quick recap: BOOM Esports was on a high coming in the new tour. The squad just won the first (albeit non-DPC) LAN of the year, and they were undoubtedly the favorites to win it all in the SEA DPC en route to their first Major. The team had just been reinforced with both Souliya "JaCkky" Khoomphetsavong and Saieful "Fbz" Ilham finally joining their boot camp over in Pampanga.

On paper, they were unstoppable.

Nothing can go wrong. Right? And right on cue Murphy’s law struck... and struck hard. 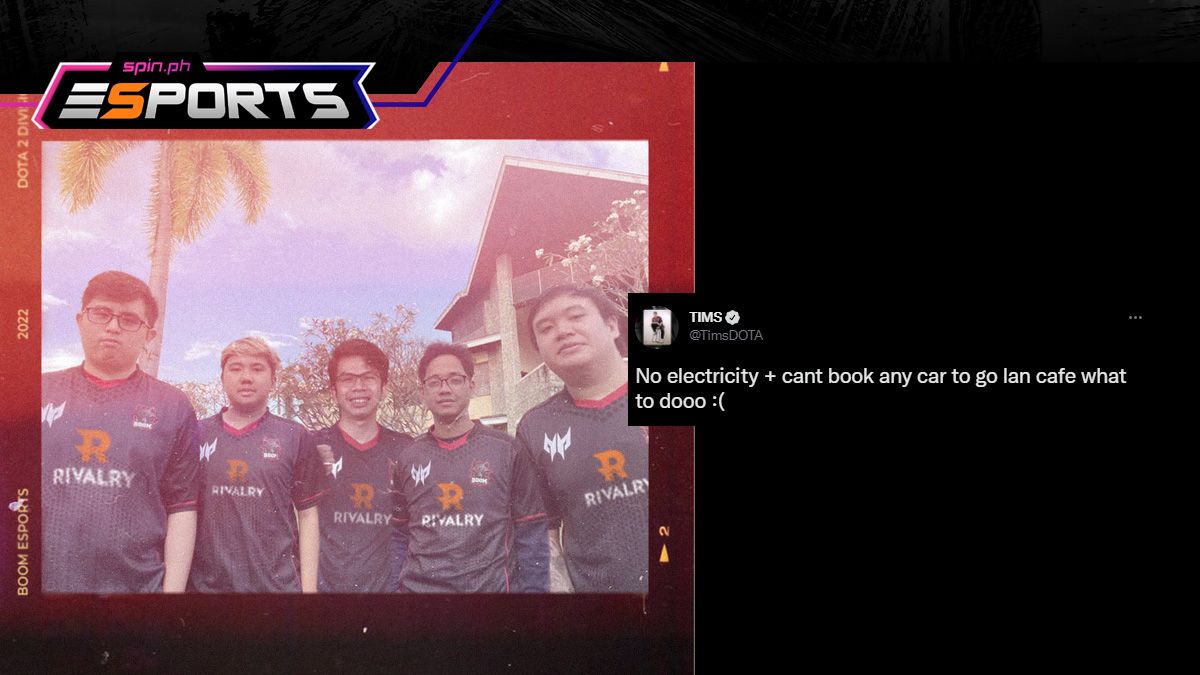 What exactly happened to BOOM Esports?

On March 19, as LANE remembered it, the team was feeling good. They already had a great scrim earlier in the day, and were confident facing Nigma Galaxy SEA.

It was a gloomy outside, and rain was pouring from morning to afternoon. LANE recalled that it was around 2 PM when they finished scrims, and by then, thunder was already shaking up the skies. But the team didn't care: Dota 2 and esports, in general, is an indoor game.

It was 5 p.m. when the power finally cut out. The manager initially dismissed the power outage, noting that they did not expect it to take long. They were confident that everything would be all right since their boot camp was situated in what he called a "high-class" subdivision, and they had not encountered any logistical problems before.

When the outage had dragged out to 30 minutes, he started to worry. If it was mere damage to the subdivision’s line, the lights would have been back on by then. It was then that he decided to bring the team to an internet shop owned by Tims.

Then, another stroke of bad luck.

He already expected booking a Grab would take a while in Angeles, Pampanga. But he did not expect that not a single car could be booked that day.

Just as everything looked dire, a ray of hope came via a delivery. LANE begged the driver if he could bring the boys to that computer shop, even offering to pay for the ride, but alas, even Kuya Driver turned them down.

It took more than two hours before they managed to book a ride. By this time Polaris and T1 were already wrapping their series, and LANE was already coordinating with organizers Beyond the Summit on the tournament’s rules and protocols.

“Two hours. I was on the phone, on the PC, I was communicating with the organizers. 'How much time do we have? How much time will you give us? What’s the penalty?”

Management in Indonesia also had to be kept in the loop. According to LANE, the organization tried their best to mitigate the situation, but as they were in another country, they could only do so much.

Finally, they were able to book one car. Not enough for the entire team, but at least he and Indonesian player Saieful "Fbz" Ilham could scout ahead. "Nakapunta kami ni Fbz sa shop. Dumating kami inaayos yung setup tapos sila hindi pa maka-book,” he said. “Nandun sa shop yung tito ni Tims so I asked him, 'Tito, can you get them please?”

According to LANE, it was a pretty long journey from their boot camp to the internet shop, taking about 15 to 20 minutes. By the time they arrived, they were informed that they had already forfeited Game 1.

It turns out that while the computers inside the shop had Dota 2, they weren't in the latest version, as customers played VALORANT and CrossFire more.

Then finally, the hammer: Five minutes after Tims and the rest of the team arrived, he was told they were disqualified from the series.

It was a disheartening turn of events for LANE.

Still, on that depressing night, he knew that he had to stay strong for the team.

“As a manager ayoko din naman ipakita sa kanila na I was so pissed. Because they would feel it also.”

Despite that heartbreak, he recalled how Coach Chai Yee “Mushi” Fung lifted the team’s morale back up.

The coach told the team: “Okay guys, its not our fault we couldn’t control the weather. It’s just one game down we can still qualify though we aren’t able to do a perfect run."

To drown out their feelings, they walked under the stormy weather to a nearby ramen shop, hoping to destress.

But even with their stomachs full and the heartbreak somewhat tided over, their run of bad luck wasn't done with them just yet.

When they returned to the bootcamp, the power was still out.

The team hung out in a bar just outside the bootcamp subdivision to wait the storm out. By then, LANE's notifications were already pinging, as fans, critics, and naysayers began blasting the team manager for what happened.

“At the back of my head, I was thinking that maybe I should have done more. [But] another part was like, “These guys don’t know a thing!'" he recalled.

By 11 p.m., the storm had petered out to a faint drizzle, and BOOM decided to head back to their house. Of course, to complete their night of misfortune, no tricycles were available to take them back. They were tired, they were down, but the team hoofed that kilometer back to the bootcamp, determined to soldier on.

What BOOM learned after this unfortunate incident

When Spin.ph asked LANE if BOOM still dwells on the events of that night, he said that the team just laughs it off now. But even so, it was not a great way to start the Dota 2 circuit, especially with the tough competition that awaited them.

As for LANE, he took that day as a lesson, building even more contingencies for their bootcamp protocol.

“We discussed getting a generator,but (being on a fiber connection), it won’t work because our internet is direct to the post. I also explored the possibility of getting a mobile data, para siyang mini router binilhan ko sila ng tigiisa but hindi kasi stable so it will be useless,” he explained.

They also now hire a car on every match day, regardless of whether they would need it or not.