A SAD DAY for Valorant fans in the Philippines as Bren Esports can no longer travel to Berlin to compete in the upcoming VCT Stage 3 Masters Berlin tournament, robbing them of an opportunity to show their talents in the global stage.

Alex Francois, the Head of Competitive Operations for Valorant Esports, published an official statement on the league’s official Twitter page. 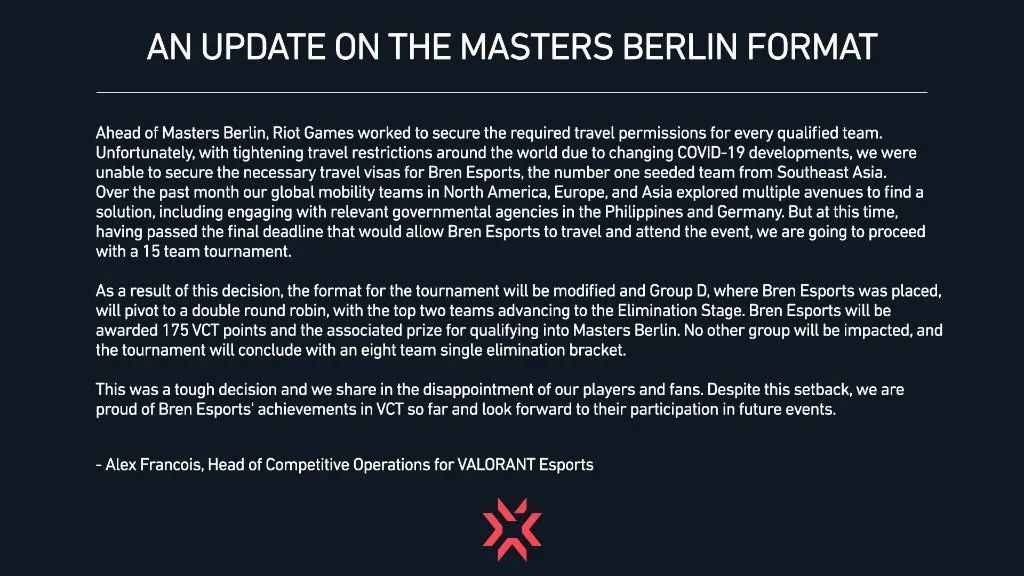 He said that Riot Games mobility teams across three continents did everything to ensure that every team competing in the said tournament will be given travel permits. However, Bren was unable to secure the necessary documentation to travel to Europe.

“Ahead of Masters Berlin, Riot Games worked to secure the required travel permissions for every qualified team. Unfortunately, with tightening travel restrictions around the world due to changing COVID-19 developments, we were unable to secure the necessary travel visas for Bren Esports, the number one seeded team from Southeast Asia.”

He continued by saying that the company tried to look for solutions, which involved engaging with government agencies from the Philippines and Germany, but unfortunately nothing materialized.

“Over the past month our global mobility teams in North America, Europe, and Asia explored multiple avenues to find a solution, including engaging with relevant governmental agencies in the Philippines and Germany. But at this time, having passed the final deadline that would allow Bren Esports to travel and attend the event, we are going to proceed with a 15 team tournament.”

How VCT Masters Berlin will run without Bren Esports

Due to Bren’s absence, Group D, where the team was placed, will shift to a double round robin format. In order to compensate for their loss, Riot awarded Bren 175 VCT points and the associated prize for qualifying into Masters Berlin.

By the end of the statement, Francois expressed his disappointment with the outcome while acknowledging Bren's achievements, hoping to see them return in future events.

“This was a tough decision and we share in the disappointment of our players and fans. Despite this setback, we are proud of Bren Esports’ achievements in VCT so far and look forward to their participation in future events.”

Speculation about Bren's visa problems exploded earlier this evening, as Bren posted, then deleted, a tweet with a tear-eyed emoji. Shortly after, #BringBrenToBerlin began trending on Twitter.

The extent of the behind-the-scenes workings was glimpsed when even Bam Aquino tweeted about the issue an hour before Riot issued their official announcement.