Valiant last stand for OB.Neon as they exit Singapore Major

Still, Team Secret needed three games and a slugfest in the hour-long decider to take out the last Southeast Asian team.

It was Yopaj who carried the Pinoys on his back in Game 3, his Wind Ranger picking off Secret’s carry Troll Warlord and mid Death Prophet in some of the team fights. He would end the game with a 100-percent kill participation, with an 11/4/14 KDA.

Team Secret was firmly in control of the decider 47 minutes in and led OB.Neon by as much as 27k gold. A team fight around the Roshan Pit saved the game for the Pinoys as they took down four of Secret’s heroes and Roshan to extend the game.

As the game continued to stall out, Secret managed to get crucial items to deal with Yopaj’s Wind Ranger, and eventually ended the game at 62 minutes after a massive team fight at Roshan.

Still in the Singapore major is Pinoy Mid-laner Abed who is playing for North American squad Evil Geniuses. They face Chinese powerhouse PSG.LGD later in the day for the upper bracket finals. 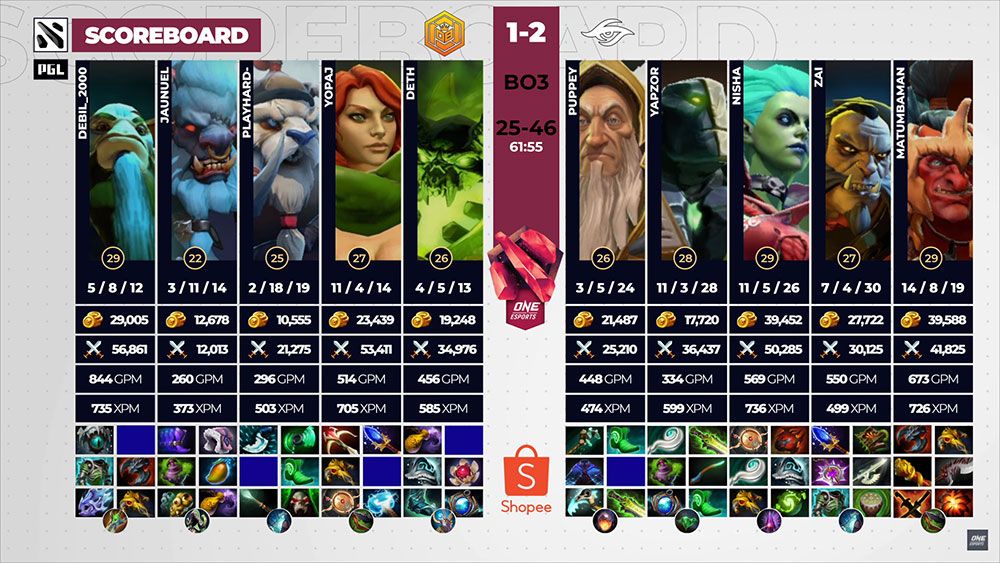 Things initially looked good for the team formerly known as Neon Esports at the start of the match-up. OB.Neon took crucial team fight wins with Yopaj’s great Puck initiates in Game 1. It was Team Secret’s great use of buyback which turned the tide against the Pinoys, turning a team fight win into an overextension.

The Pinoys were able to extend the series by pushing back Secret’s high ground push at the 41-minute mark. But as the Europeans were retreating, Puck’s overextension on the high ground was punished heavily by Secret, sidelining him for a hundred seconds without buyback.

Without the Puck, Secret was able to take the Pinoy’s barracks. In an effort to avoid mega creeps, OB.Neon’s carry Leshrac and Legion Commander would try for a team fight to push the EU powerhouse back, but was instantly deleted by Secret’s heroes, forcing the Pinoys to concede the first game 44 minutes in.

Game 2 looked like it was going in Secret’s favor as they won their lanes and grabbed pick-offs. Wanting to push their lead, Secret tried to take more pick-offs. but the Pinoys were ready to punish Secret’s aggression, evening out the scoreboard.

A team fight at the 20-minute mark looked like it would be Secret’s comeback. But a great Oracle save and BKB’s on skem’s Gyrocopter instantly turned the fight in favor of the Pinoys, who took down three of the Europeans. This opened up Roshan and eventually the top barracks in 24 minutes.

Team Secret tried to defend their mid barrack, but a great Bat Rider lasso initiate on the Carry Monkey King, who did not have buyback, gave the game to the Pinoys in 26 minutes to force a decider.