TNC Predator may have let go of its stellar lineup, officially releasing them into the wilds of free agency today — but the team’s story, the organization clarified, is far from over.

“As the previous roster of Tims, Armel, Gabbi, Bok and Boomy goes into free agency, the journey of TNC Predator Dota 2 goes on,” said Eric Redulfin, the organization’s CEO and owner, in a statement released today. 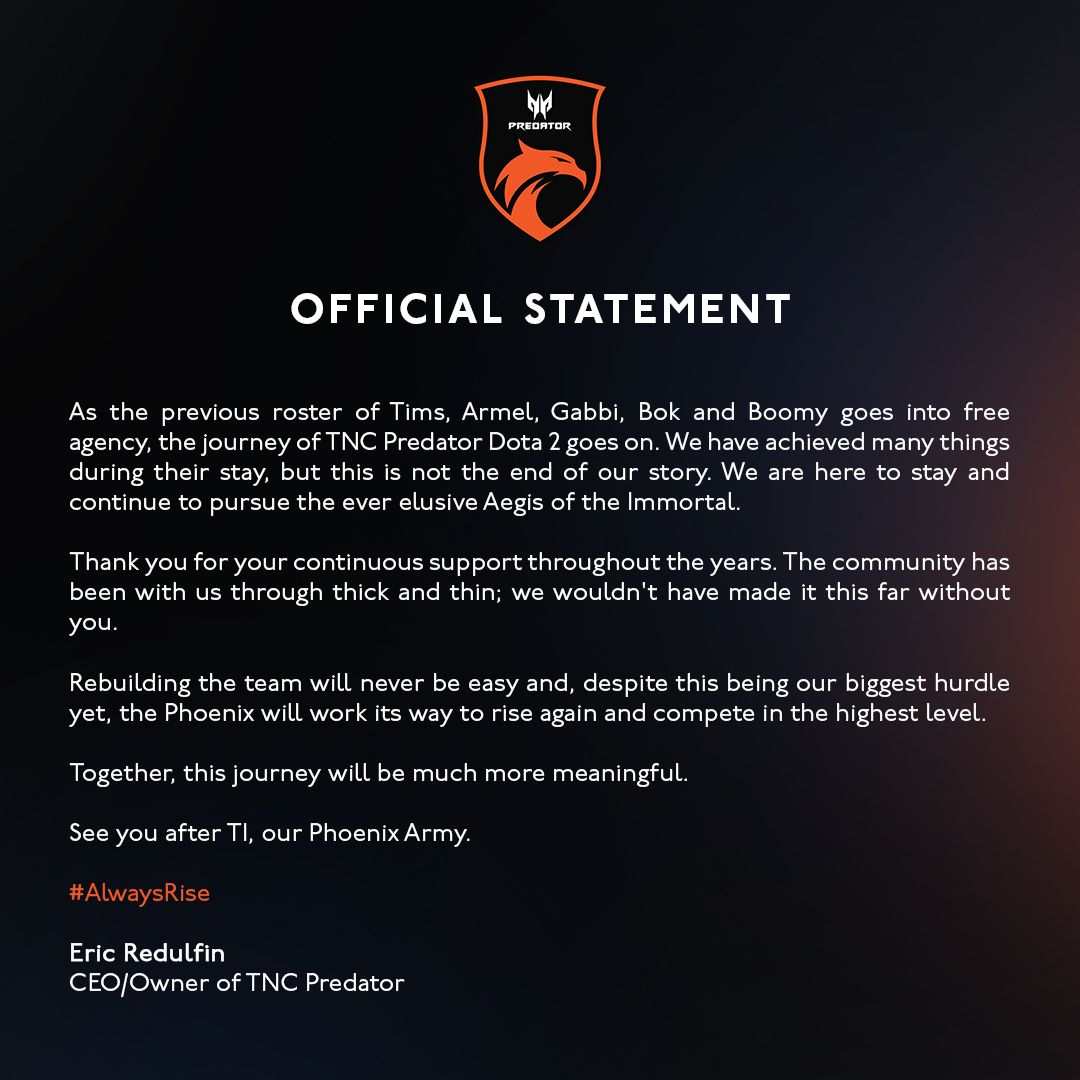 Redulfin added, “We have achieved many things during their stay, but this is not the end of our story. We are here to stay and continue to pursue the ever elusive Aegis of the Immortal.”

How TNC Predator will rebuild

In an interview broadcast in the organization's Facebook page yesterday, Redulfin acknowledged the uncertainty of esports in the pandemic has been challenging for the organization.

It’s been a whirlwind of news from the TNC Predator camp, with Monday’s surprise announcement that it would be releasing its Dota 2 players today, September 15.

The historic TNC squad has emerged as the Philippines’ most accomplished Dota 2 team, with the team qualifying for Dota 2’s The International in 2016 — the first Pinoys to do so since Mineski in the very first The International.

However, 2021 has been less than ideal for the most recent lineup, composed of Kim "Gabbi" Villafuerte, Jun "Bok" Kanehara, Armel "Armel" Tabios, Timothy "Tims" Randrup, and Marvin "Boomy" Rushton. They failed to qualify for The International 10 (its first TI no-show in five years), edged out of the WePlay AniMajor in Ukraine by Evil Geniuses, and falling to regional rivals Fnatic at the Southeast Asian qualifiers.

“Rebuilding the team will never be easy, and, despite this being our biggest hurdle yet, the Phoenix will work its way to rise again and compete in the highest level,” continued Redulfin's statement.

After the rebuilding journey, the TNC CEO and owner assures fans that “this journey will be much more meaningful.”