VAGABONDS Esports proved once again that they are the best CODM battle royale has to offer as they orchestrated a dominating encore performance to capture the Garena Survivors 2 title.

The Filipino team, who won Garena Survivors 1 by a wide margin, nearly replicated their success by winning 7/18 rounds with 282 total points. The performance is only 2 rounds off from their showing in GS1 winning 9/18 rounds and 278 total points. 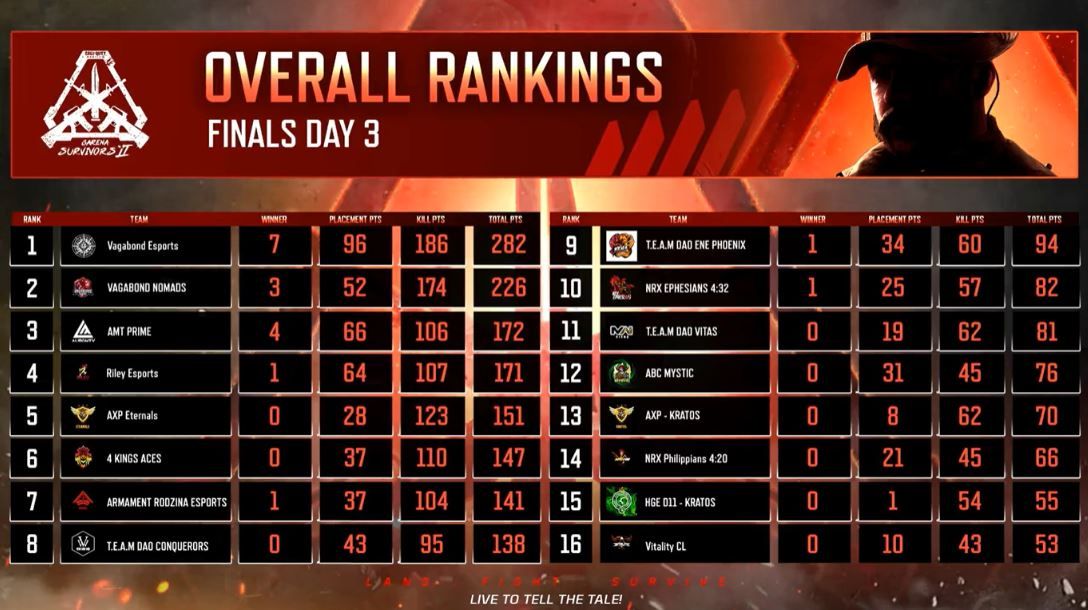 Sister team Vagabonds Nomads followed them with 226 points of their own including 3 round wins to finish in second place, while AMT Prime rounded up the top 3 by scoring 172 points with 4 round wins.

The champion core of the team led by captain Josef Brey "Blue" Evidente will again bag the biggest split in the $25,000 prize pool amounting to $10,000 or approximately P560,000.

Vagabonds Esports players talk about the changes made in GS2

Along with a new season came some noticeable rule changes in the tournament including the prohibition of using in-game skins on both guns and characters to prevent interaction between teams and the implementation of playing in first person perspective (FPP) in all playable rounds. Team captain Blue shared his and the team’s thoughts about the recent development.

However, Blue emphasized that it did not affect the team' gameplay, citing they still have the same performance and continued to stay consistent.

On the other hand, he also shared that he despite preferring third-person perspective (TPP) over FPP, he and the team adjusted accordingly and made the necessary adjustments to stay in form and at the top of their game.