AS IN yesterday's sibling rivalry where a Filipino team prevailed over another SEA squad, RSG PH likewise repeated the storyline as they dispatched RSG in a dominant 2-0 sweep at the One Esports MPL Invitational.

Both games saw the Singaporean runner ups struggle to gain any foothold in the match as they couldn't rival their Filipino counterparts' ruthless aggression.

In Game 1, RSG SG drafted a lineup featuring heroes with a strong late game burst. Their Brody and Bane have the poke damage to weaken RSG PH's signature "deathball" tactics.

However, they were left to eat dust as they couldn't contain the strong early rotations from EJ "Heath" Esperanza and his usual partner in crime, Jonard Cedrix "Demonkite" Caranto.

Demonkite's Balmond in Game 1 was given the boost from Heath's Mathilda, which allowed him to easily dissect the backlines.

They tried to spice things up in Game 2 by switching to Benedetta but to no avail, as the crowd control from Heath and Kenji's Ruby stifled any momentum their brotherly rivals tried to get going. 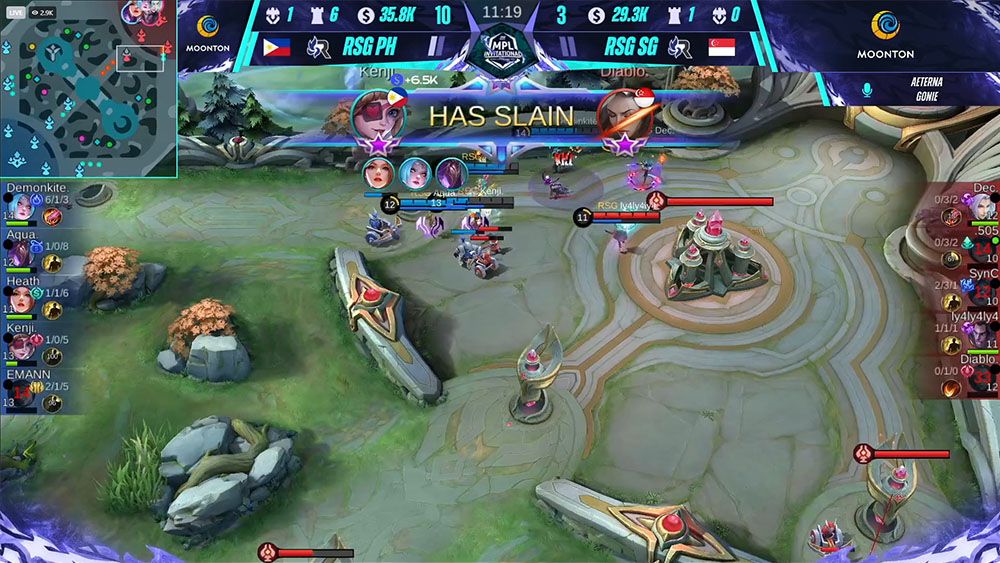 With neither having a huge degree of playing time in Season 8, both made an impressive showing over their foes.

Kenji's performances were spot on, his veteran presence on full display with his mastery of Phoveus and Ruby. The former was used to zone out threats in Game 1 while the latter created opportunities for the lethal combo of Demonkite and rookie Eman "EMANN" Sangco to engage in Game 2.

And speaking of EMANN, he proved to be a formidable threat behind Demonkite as his sudden entrances paved the way for RSG PH to dominate every teamfight. His Claude in Game 2 surprised the backlines of the Singaporean powerhouse, eliminating them from the tournament.

Coach Panda wants to further explore on his roster

After the surprising display from the bench, Coach Brian "Panda" Lim explained his reasons for selecting Kenjie and EMANN.

"For the RSG PH side, we didn't really get the best results in the regular season so for this season I wanted to try our other reserve players, Kenjie, EMANN, and also Exort. Luckily and also successfully it really worked out," the mentor of 2019's SEA Games gold medalists explained.

He likewise mentioned the importance of this rivalry.

"Fighting against RSG SG is also meaningful because people are entertained to know which team is more prepared or more eager, and I can see that both teams really played well. Vut today we're a bit more lucky."

Panda admitted that his team didn't have a lot of time to strategize against their rivals, which explained why they stuck to their tactics from Season 8.

He said, "Actually the last scrim with RSG SG took place even before MPL PH Season 8. So we didn't really have a lot of time to strategize against RSG SG because we had to fit two of our new players to the roster, so we just went with our comfort picks."

RSG PH will face local rivals ECHO PH in the next round.