WITH THE submission of a complaint of copyright infringement to the United States District Court Central District of California, Riot Games and MOONTON enter into a fresh round of legal battle.

The latest lawsuit was submitted last May 9, with a public document uploaded on scribd.com.

If the previous legal faceoff centered on what Riot Games viewed as Mobile Legend's copying of League of Legends, this new legal challenge shifts the battleground to Wild Rift, saying that Riot "seeks to stop Moonton from continuing its deliberate and sustained campaign to free ride on Riot’s highly valuable rights in the mobile video game League of Legends: Wild Rift and related content.”

A MOONTON representative sent the following statement to Spin.ph:

"There are media reports today about Riot’s recent complaints about MOONTON Games' immensely popular Mobile Legends: Bang Bang (MLBB). Since its launch in 2016, it has inspired millions of players around the world and brought a community of gamers together. While it is unfortunate that MLBB’s success has made it a target, MOONTON Games stands by MLBB and the countless artists, engineers, and employees who bring it to life each day."

Inside the new Riot Games vs. Moonton lawsuit

According to the lawsuit, MOONTON’s approach was considered by Riot as “blatantly copying,” with the developer describing numerous instances of promotional materials that Riot would make, only for MOONTON to allegedly rip them off.

"Upon information and belief, there is no part of Riot's creative input that Moonton is not willing to copy," claimed Riot.

Among the earliest submitted exhibits is Section 8 of the court document, which compared the logos of both League of Legends and Mobile Legends.

Section 55 discusses League of Legends' K/DA Ahri skin, and alleges that MLBB tried to replicate the same with Guinevere.

The Los Angeles-based developers also pointed out numerous skins and heroes that allegedly looked similar to the ones established by Riot Games’ flagship MOBA title, with comparisons between Zac and Gloo, the Dark Cosmic Jhin skin and Dark Star skins with MLBB’s Yve, the pool party outfits, as well as the visuals from their trailers. 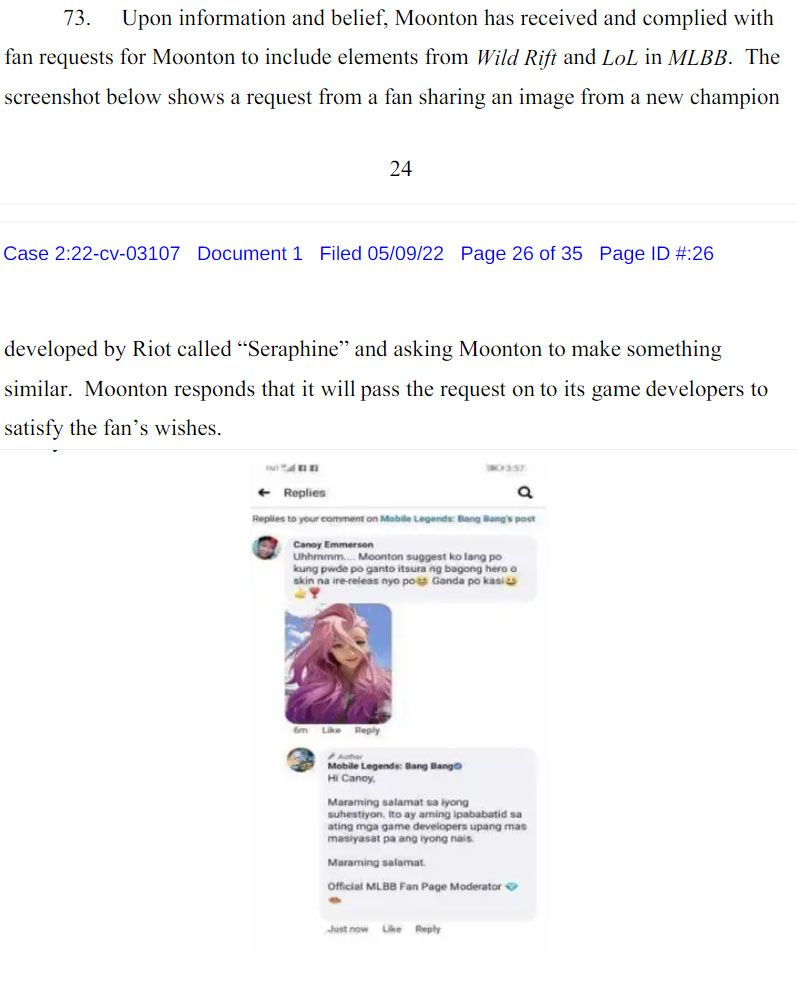 In Section 73, Riot included a screenshot of a fan asking MOONTON to make heroes that looked like League of Legends champions, to which the official Mobile Legends: Bang Bang page replied in Filipino that they would pass the request to the developers.

The final exhibit submitted was a photo of a marketing campaign when Riot Games sent out customized Nike sneakers to promote Wild Rift last October 2020, which MOONTON allegedly copied in March 2021. 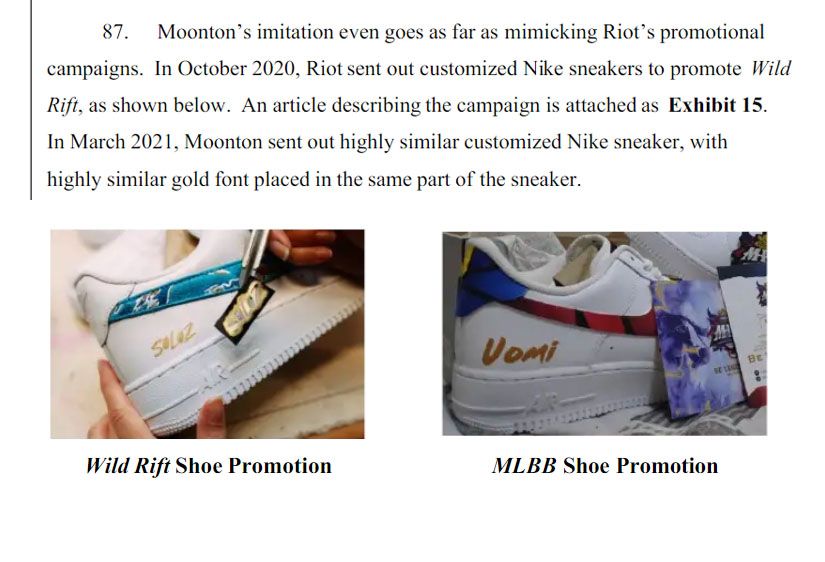 A picture of MPL-PH shoutcaster Theo “Uomi” Ignacio’s shoes were included in the lawsuit document in Section 87.

At the end, Riot mentioned that they demanded a trial by jury regarding the "wllful infringement" indicated in the lawsuit.

This wasn’t the first time that Riot Games filed a lawsuit against MOONTON to the Central District Court of California. But their first suit, filed last 2017, was dismissed, forcing Riot to ask their parent company Tencent to file a separate lawsuit in China. They were later awarded a $2.9 million settlement.

Since the lawsuit, Mobile Legends: Bang Bang has grown into one of the world's biggest mobile games.