THE CINDERELLA run continues for Pinoy squad OB.Neon as they eliminate Vici Gaming, 2-1, at the Singapore Major.

The Pinoys looked different in Game 1, foregoing their high tempo game by picking a carry Medusa to go against Vici’s carry Juggernaut.

Despite going even for most of the game, the Pinoys just couldn’t sustain their farm, with only Medusa reaching the top net worth while the rest of the team struggled against the Chinese cores.

A fight around the Roshan Pit at the 33-minute mark saw OB.Neon lose three heroes. The Chinese would convert this to a high ground push, taking the mid-tier three. A last-ditch fight at 36 minutes in saw the Chinese pick off four of OB.Neon’s heroes to end the game.

Game 2 saw OB.Neon shift focus and go for a more active lineup. The squad took the last pick Spirit Breaker pair to their now-iconic carry Nature’s Prophet and Puck. Vici tried to counter this by picking an offlane Alchemist to farm their core Void Spirit, and Gyrocopter Scepter to hopefully punish the aggression.

The Chinese plan failed drastically as OB.Neon did not give Vici’s Alchemist any time to get online. The Pinoys were constantly moving around the map, taking pick after pick off around the map, going up 16-7 in kills in 16 minutes and up about 5k gold. 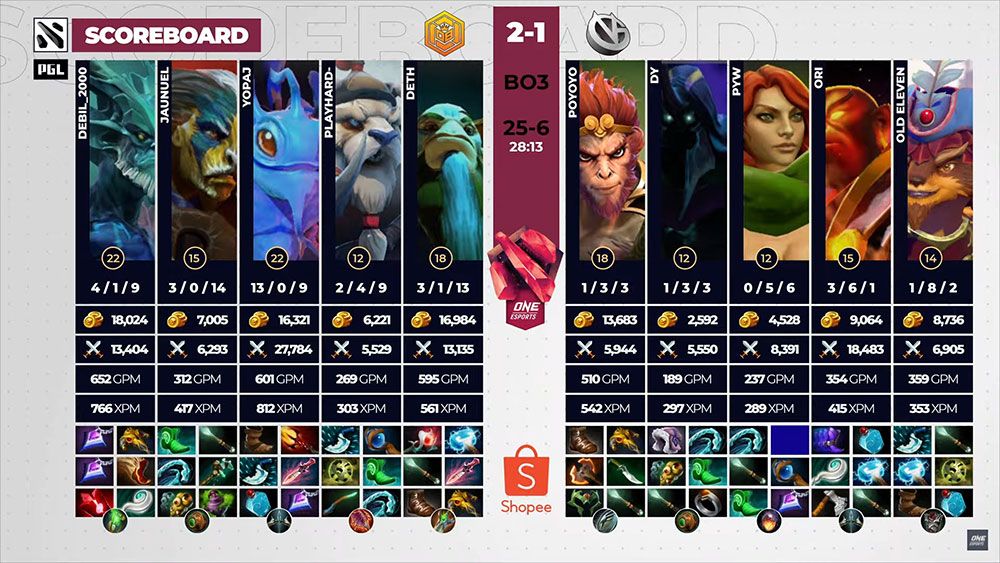 The last remaining Southeast Asian squad would then choke out Vici from any resources, decisively taking down any heroes who went out of the base. The Filipinos ended Game 2 with a 40k gold lead and a 39-13 kill score.

The decider was the same affair, with OB. Neon taking Puck and Nature’s Prophet in the draft. This time, however, they opted for a carry Leshrar, moving the Prophet to the offlane.

Vici meanwhile tried to bet on their offlane Pangolier and carry Monkey King.

The Pinoys repeated their “go at them” style, denying the Pangolier any chance to play by ganking him whenever the Puck’s Dream Coil was online. The constant harassing against Vici’s heroes gave Yopaj’s Puck a beyond god-like kill streak around the 24-minute mark. By the 26th minute, the Pinoys were up 18k gold as the Chinese were unable to get out of their base. They would call the game 29 minutes in.

OB.Neon now have a tough task ahead as they face tournament favorites Team Secret, who was sent down to the lower bracket by PSG.LGD earlier in the day.

The North American squad now face PSG.LGD in the upper bracket finals for the first spot in the Grand Finals.