COLUMN: Mobile Legends' alleged exclusivity clause may harm league, not save it

by gab pe
4 days ago

IT'S BEEN more than a week since rumors of an alleged Mobile Legends exclusivity contract have popped up among industry observers.

To recap: a Facebook page called Wild Rift New Esports News — run by guys from Team Liquid, particularly their Liquipedia website — dropped a major bomb when they reported that some Mobile Legends teams in the region had an exclusivity clause that prevented them from establishing other esports teams in other titles.

A highly placed source who did not wish to be identified later confirmed with Spin.ph staff that, yes, an exclusivity clause for Mobile Legends does exist inside what they term a "commercial contract" given to esports organizations. However, it is optional. Those who do sign it, however, get commercial and revenue benefits.

With no official confirmation from Moonton about this, we're still treating this as a rumor. (That's why we have the word "alleged" in the headline.)

Even if it's a rumor, it certainly got a lot of people talking. Team Secret’s CEO John Yao denounced the idea of exclusivity, saying that it degrades competitive integrity when sister teams face each other in international competition.

He isn’t wrong. (Sister teams are a problem the PBA know about all too well.) Just recently, MSC 2021 saw RSG MY spare no mercy for parent organization RSG SG when they faced each other in the first game of the tourney. The same would likely have happened had EVOS Legends encountered EVOS SG.

What can also spice up the sister team competition is the national pride on the line. Imagine the hype if RSG PH faces RSG MY or RSG SG in an international match-up. Or if Nexplay EVOS pushes Indonesia’s EVOS Legends to a no-holds-barred decider match in M3.

But would that be it? Will that be the teams vying for a championship just be the same organizations from at least four different MPLs?

Analyzing what an exclusivity clause might mean for MPL-PH

Our source told SPIN.ph that even if exclusivity is optional, teams who opt in get benefits. It is a tempting offer. Basically, Moonton will likely reimburse a team who might otherwise have gambled resources to build a team in another esport.

On paper, the move looks like a direct response to Riot Games’ promotion of their League of Legends mobile spinoff Wild Rift. In the year since it's launched, Riot tried their own version of the MSC, with the SEA ICON Super Summer Cup pitting champions and runner-ups of their Spring Icon series from Southeast Asia (with Taiwan and Hong Kong) against each other.

It must be remembered that Riot and Moonton clashed once before. Way back in 2017, Riot sued Moonton for copyright infringement. Moonton, however, seemingly got the last laugh, earning around $502.5 million (according to a January 2020 report from Sensor Tower store intelligence) since hitting Google Play Store and Apple iOS stores in 2016.

Is this retaliation? I highly doubt it.

I guess this was a bid to cozy up to teams to further entrench themselves into the esports scene.

But at a time when there’s a lot at stake in the scene, the move could harm both the MPL and Moonton. 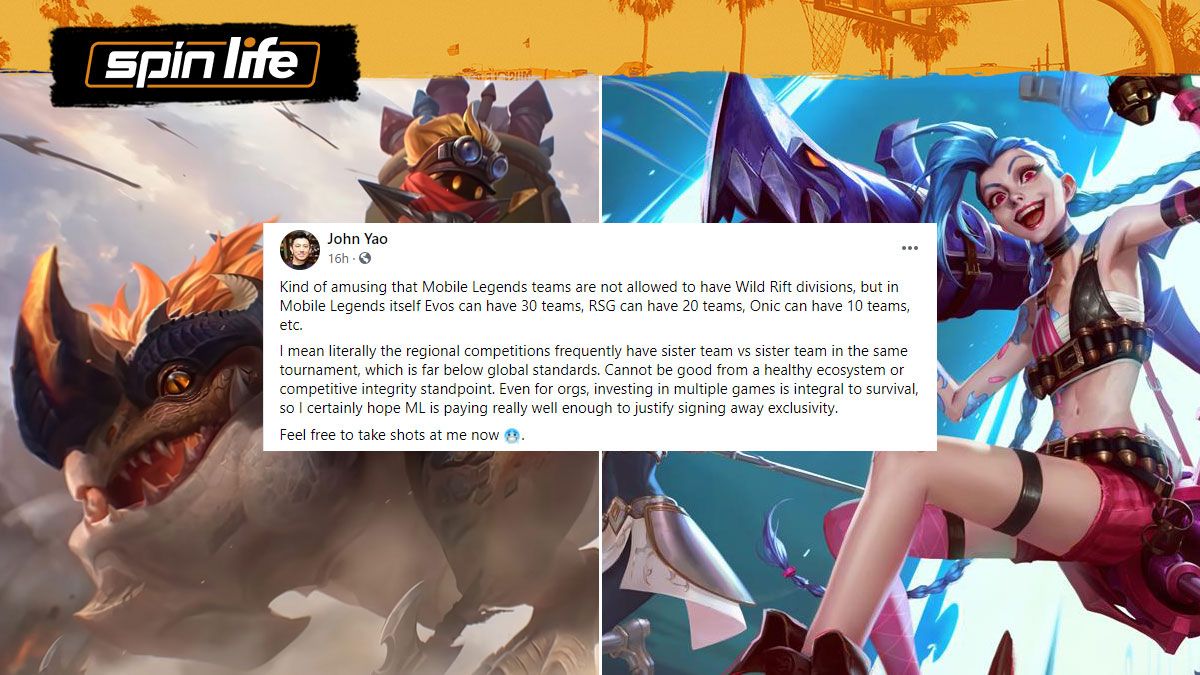 In 2013, news of Riot’s exclusivity clause for teams competing in the League Championship Series (LCS) was leaked to fans and orgs. As you can imagine, many were unhappy.

Dota/Dota 2/Heroes of Newerth fans were unhappy because they were afraid orgs such Fnatic, Cloud 9, Complexity would drop their existing roster to have a piece of the League pie.

Orgs such as Complexity were furious about Riot potentially monopolizing them and earning from their influence (League still wasn’t franchised back then), and in the end, Riot had to tuck their tails and deny the exclusivity contract. They eventually scrapped the idea completely.

Now, they have Evil Geniuses, an org renowned for their Dota 2 squad, playing in their North American League. Many other orgs are silently waiting for a chance to buy a franchise in one of their leagues.

In an era where fans enjoy more than one esports game and orgs are starting to see your scene’s potential, closing off a league is a surefire way to gain notoriety. And when you have expansion plans for the franchise-based model, appeasing fans should be your bread and butter.

Hopefully, Moonton reconsiders this alleged exclusivity contract, because I am dying to see TSM, Cloud 9, Alliance, and, heck, even T1 (and more big names) get into ML esports for real.

I’m also raring to see the comeback of RSG, EVOS, Onic, and even Aura to the realm of Dota 2, especially now that SEA has officially become a new powerhouse region in the esport.