WHEN SIBOL officially declared that “the evidence was insufficient” against West Point Esports, a frustrated Jerem “Jerem” Malig, whose accusations on Twitter began the issue against the League of Legends team, vented out his thoughts on Facebook live.

The findings from the national team seemed to overwhelm him. After months of extensive interactions with WCS Leaguepedia’s George Miguel “Youngblood” Obusan, Malig was lost for words, leading to him throwing a tantrum.

Soon, the comments section was filled with #LakadMandaraya chants.

For Jerem, he couldn’t fathom why Sibol made their decision with the numerous screenshots that were revealed.

When Sibol posted their official statement, Malig immediately commented: “Inaccurate, misleading, and untrue. That’s how Sibol investigates. How do you finish a case without contacting the one who made the allegations?”

Then he branded Sibol as “bias” while highlighting some of his counterarguments on each of Sibol’s main points.

In his first point, Malig reiterated that the stream sniping occurred in the Elder Dragon Series Tournament and not the Sibol finals. 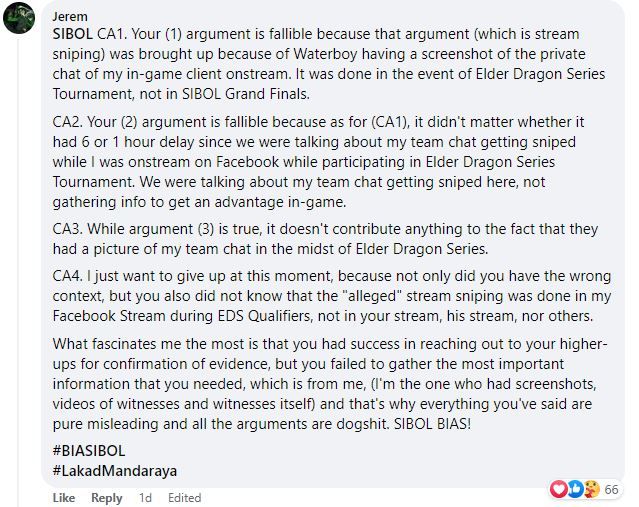 “Your (1) argument is fallible because that argument (which is stream sniping) was brought up because of Waterboy having a screenshot of the private chat of my in-game client onstream. It was done in the event of Elder Dragon Series Tournament, not in SIBOL Grand Finals," said Jerem as part of a lengthy post.

Then, he emphasized that the delay didn’t matter because the discussions were focused on the team chat snipe in the Elder Dragon tournament.

In general, most of his counterarguments were centered on the Elder Dragon tournament, leading him to believe that Sibol got the wrong context.

“While argument (3) is true, it doesn't contribute anything to the fact that they had a picture of my team chat in the midst of Elder Dragon Series.”

He added: “I just want to give up at this moment, because not only did you have the wrong context, but you also did not know that the "alleged" stream sniping was done in my Facebook Stream during EDS Qualifiers, not in your stream, his stream, nor others.”

More back and forth responses

Due to his tirade, Sibol immediately responded in the Facebook comments section saying: “Please understand that we can only decide fairly upon matters that are under our watch and we have done so regarding this matter. We stand by our decision.”

They added: “However, if new and verifiable information of actual cheating and dishonorable practices committed come to light, we will do what is right and necessary to protect the integrity of Philippine esports.”

Despite Sibol's reply, Jerem carried on with his rant by saying that “Sibol did not care and is biased.” He even posted screenshots of emails with Sibol not responding to Youngblood’s email.

In addition, he kept on pursuing his case as he uploaded a video that allegedly revealed WPE Coach Vansu having a conversation with Skambalow Manager Yin about a private Discord watch party during the Sibol grand finals.

Jerem would continue his missives.

“If your definition of staying professional is cheating not only in local, but also in big, international tournaments, then thanks, I'd rather be myself.”