COMMUNICATION problems — both literal and figurative — plagued E-Gilas’ opponents in the opening matches of the third Fiba Esports Open.

It was Vietnam and Maldives' first rodeo in the regional NBA 2K tilt, and their inexperience showed as the national squad briskly took them to school.

A smothering defense and a double-double performance from star point guard Aljon ‘Shintarou’ Cruzin bode well for E-Gilas’ first match, as they blew past Vietnam, 78-40.

But even they could not have expected how dominant they would be in their second game of the night.

Connection problems marred both the start and the end of the match. Team Maldives struggled to connect to the online game arena, leading to an almost 20-minute delay before the game kicked off.

Viewers were unable to watch up to the final whistle, as the livestream stopped at 2:27 left in the game on both the Facebook and YouTube livestreams. The score before the game blackout? An unbelievable 111-26 stampede over Maldives.

(UPDATE, 16 April, 11:10 p.m.) But a scorecard released by the Samahang Basketbol ng Pilipinas showed the final tally: 124-30. Shintarou led the scoreboards with a blazing 54-point performance, handing out 14 dimes and managing 5 steals. 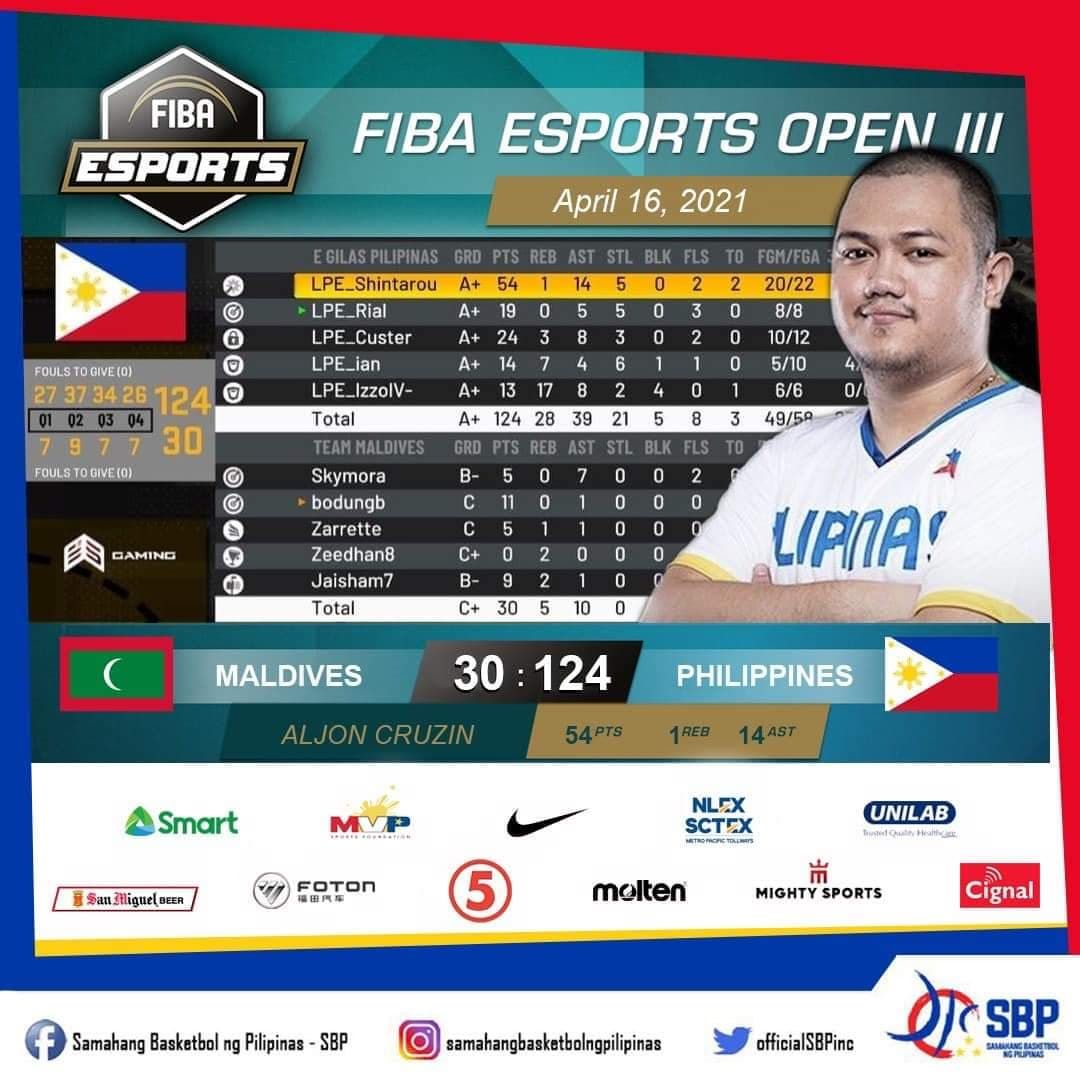 Team Maldives failed to put up any kind of struggle against the national 2K squad. At the final frame, they managed only 3 points in as almost many minutes before the livestream went black.

E-Gilas’ opener against Vietnam showcased the trademark strengths of Shintarou, who racked up an easy 26 points and 12 assists in a 78-40 blowout.

His first long-range shot — the deadliest weapon in the veteran’s arsenal — came in the middle of the first quarter, burying a three-pointer from way beyond the arc. Then, in a highlight play at 1:31 left in the game, he unleashed one of his trademark ankle breakers, leaving Vietnamese point guard HiuePanTV sprawled on the floor as he took a wide-open three.

In between, Shintarou never let up the pressure, making 9 of his 14 shots while also generously dishing out 12 assists.

Rial 'Rial’ Polog and Custer ‘Custer’ Galas added 24 and 11 points, respectively, as the Philippines built an 11-point lead from the first quarter and never let up from there.

E-Gilas will face the top dog of the Sri Lanka, Mongolia, and Indonesia group in the semifinals stage tomorrow.