AT THE crack of dawn on February 16, Molly Octaviano thought that she’d scored a very good deal on Valorant.

A streamer on the side — who goes by the name Molly Cules — the 24-year-old was looking to grab the Glitchpop Bundle, a popular set of cosmetic skins in the multiplayer shooter that decks out the game’s many guns in psychedelic, cyberpunk neon. And she was about to close a deal with Mark Ryan Pagalunan, who was selling Valorant Points (the in-game currency used to buy these skins) for a very cheap price.

But wait, there’s more. Pagalunan offered Octaviano an additional discount on the transaction.

“wag mo ako demonyohin kuya haha teka nga,” she said in disbelief. With that discount, his initial offer of P2,420 was now down to just P2,178.

Pagalunan reacted to her message with a laughing emoji.

Pagalunan sounded legit. Previously in the chat, he had shared a public Facebook post to her of his profile, which featured multiple testimonials from other Facebook users attesting to his credibility and legitimacy. Less than an hour after they first started chatting, she sent the money to him via bank transfer, delivering it straight to his GrabPay account.

He messaged her right away, acknowledging receipt of payment. But he warned her that his supplier still needed to process the payment so he could send the points to her. “mga around 530 to 6 daw oks na yan,” he said. “refund ko na lang?”

And wait she did. The sun came up, and still no Valorant Points. She messaged Pagalunan multiple times, but the seller ghosted her, and ignored her many calls.

Irked, she told him, “Sige paps goodluck. Mali ka ng iniscam.” Soon after, his Facebook profile vanished into thin air, along with the post with the many testimonials.

In the afternoon of that day, Octaviano posted about her experience in the Valorant PH Facebook group. By this time, she had already begun gathering screenshots and reports, and that entire day, running almost without sleep, Octaviano was doing some digging of her own. The Facebook post, which you can view here, also inspired a wave of private messages to flood her inbox, recounting similar experiences.

What she found shocked her. She began to suspect that “Mark Ryan Pagalunan” was among the many aliases of John Paulo Bacani, a former professional esports athlete.

In a affidavit she filed with the NBI Anti-Cybercrime Division on February 17, she alleges that Bacani has been using his multiple aliases to scam people online out of significant amounts of money. “He’s been doing this for years,” Octaviano told SPIN Life.

Throughout the pandemic, the Department of Trade and Industry has warned the public to be careful of online scams, especially as more and more transactions are being done digitally because of the pandemic.

At a Congress hearing conducted last November, DTI Undersecretary Ruth Castelo told lawmakers that the agency had received 14,869 complaints about online transactions in the first 10 months of 2020. 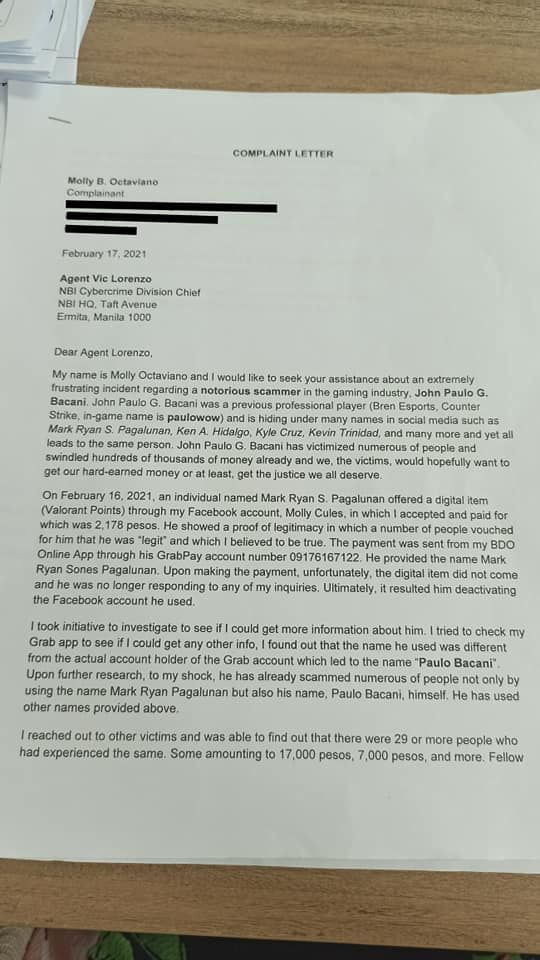 Octaviano, however, did not report her alleged experience of being scammed to the DTI. Instead, she went straight to the NBI.

“I would like to seek your assistance about an extremely frustrating incident regarding a notorious scammer in the gaming industry, John Paulo G. Bacani,” part of her affidavit reads. “[Bacani] was a previous professional player [...] and is hiding under many names in social media.”

In an interview with SPIN Life, Octaviano said that at least 29 people have reported to her via group chat that they have allegedly experienced being scammed by Bacani, using both his real name and multiple aliases, including “Mark Ryan Pagalunan”, “Ken Hidalgo”, “Kyle Cruz,” and more.

SPIN Life examined a sample of the screenshots provided by Octaviano, allegedly from those victims. At least five other people provided receipts of online transactions amounting to P29,145 that were sent to, variously, “Mark Ryan”, “Paulo Bacani”, “Ken”, and “Paulo”. All of these accounts used the same mobile phone number (registered under GCash and GrabPay) to receive the payments. Transaction dates on these receipts show money transfers from as early as March 21, 2020. 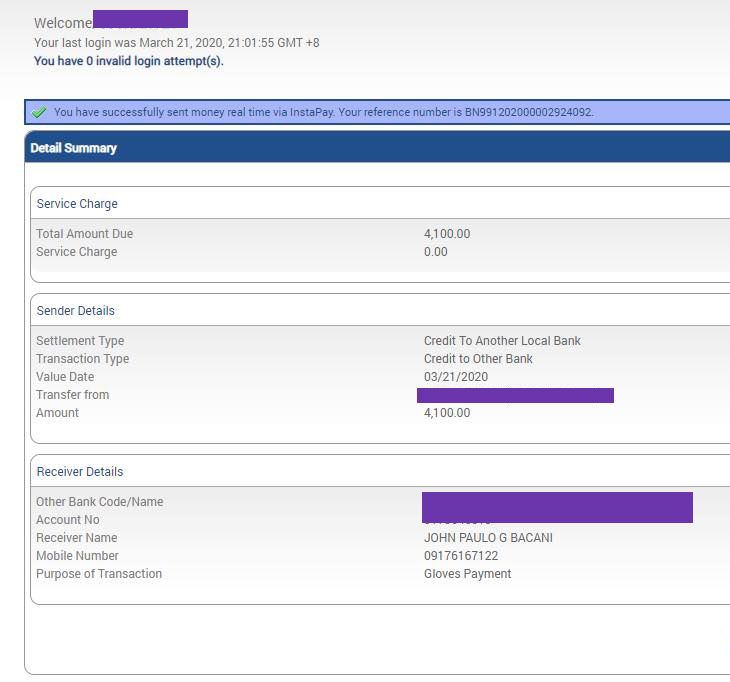 A sample of screenshots examined by SPIN Life of the alleged scammer using the same number to accept transactions.

According to screenshots of Furtos' chat, he lost P8,550.

Another person who talked to "Paulo" made at least eight transactions (totaling to P11,300) to that number from the end of August all the way to October 5 of last year. This person was hoping to resell the discounted Mobile Legends Diamonds (“dias”) as well as Valorant Points (“valo”) he would get from “Paulo.”

These accounts all communicated to the alleged victims via Facebook Messenger. In addition, the modus operandi used are similar. The seller would offer in-game currency at heavily discounted prices, and then ask for screenshots as proof of payment. The seller would acknowledge receipt, but claim that their purchases were still being processed or that he was having problems with his own supplier. He would also offer to refund the transferred payments. He sometimes made good on that offer, as evidenced by Furtos.

In her affidavit, Octaviano claimed that, based on her conversations with other victims, the total amount scammed reached "hundreds of thousands of [pesos]."

She had also reached out to some of the people who had provided the testimonials on the profile of “Mark Ryan Pagalunan”, which had led her to believe that the seller was legitimate when she was deciding whether to buy from him or not.

One of the people told her that “Pagalunan” had been able to convince people to post positive testimonials on his feed as part of an online raffle to win a Battle Pass in an online game.

In her affidavit to the NBI, Octaviano alleges that John Paulo Bacani is an ex-esports athlete for Bren Esports, and was a professional CounterStrike: Global Offensive player for the team, playing under the name “Paulowow”.

SPIN Life has messaged the account of one “Paulo Bacani”, which Octaviano said is this person’s active profile.

In January 2020, Bren Esports made the announcement that a “Paulowow” joined their CS:GO Bren Esports F5 line-up. But he appears to no longer be associated with the team. It is unclear when he left the organization.

We have reached out to Bren Esports for comment.

Neither Bacani nor Bren Esports have replied as of posting.

As for Molly Octaviano, she is determined to see her NBI complaint to the end. But even the filing of the complaint was a matter of last resort for her.

“I already know who he was. I already know his name, the names that he's using. But I tried to give him a chance,” she said. This is why she had posted her open letter in the Valorant PH Facebook group, calling on him to do the right thing.

She said that what she’s spent so far to file the complaint has far exceeded the amount that was allegedly taken from her. But Octaviano said that she’s doing this because, as she said, “Somebody needs to do something.”