THE CALL of Duty: Mobile World Championship for 2022 returns, with the best teams from each qualified region competing for a share of the grand finals prize pool of $1.7 million (around P88.5 million) — so far the biggest winnable prize in CODM World Championship history.

The format for the 2022 Call of Duty: Mobile World Championships

The Call of Duty: Mobile World Championship 2022 will be conducted per region in multiples stages, from Stage 1 to Stage 5.

Stage 2 (Open Team Play): Players will compete as teams in up to 30 Ranked Matches to earn points. The top 256 teams from each jurisdiction (based on number of points) will advance to Stage 3. In case of a tie at #256, the team that completed its 30 Ranked Matches first will qualify.

How it's different this year

The esports setting for this year’s World Championship is going to be filled with a variety of changes too, most notably replacing game modes and having additional maps for rotation. Aside from the aforementioned Swiss elimination format, point allocations in Stages 1 and 2 have also been adjusted, in a bid to keep things "fresh and fostering top-tier competition," as CODM declared in its update. 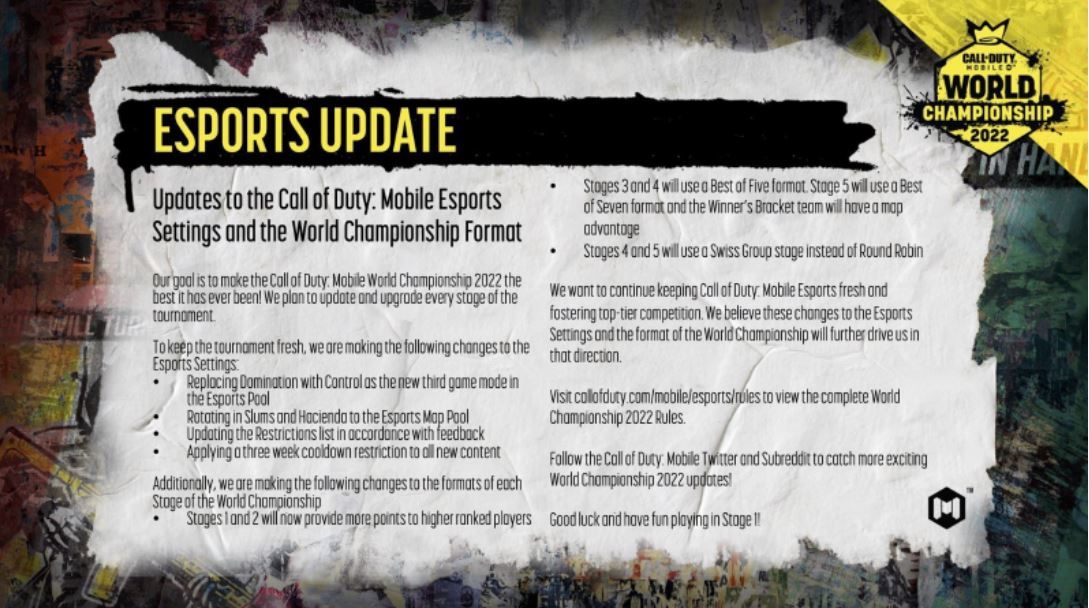 The hope for LAN

As the World Championship enters its third year of competitive play, the hope for an offline LAN event is still a tantalizing prospect for CODM athletes.

In 2020, the first ever World Championships had its run cut short because of the pandemic, and champion teams from each region had to settle for a Stage 4 finish as the world series didn't push through. That included the first-ever Filipino CODM champion NRX Jeremiah 29:11.

Last year’s championship almost had a chance of hosting a LAN event, but unforeseen circumstances meant organizers for the Mexico event backtracked two months before it was set to kick off.

Although the Filipinos made their mark in both championship winning teams, the quest for LAN is still on.

After two seasons of setbacks, would this be the year an offline World Championships finally happens?