After anime premiere, here’s how 'Dota 2' is changing

IN TIME for the premiere of the DOTA: Dragon’s Blood anime, Dota 2 developer Valve dropped a massive quality of life update to the Dota 2 client and website.

This includes a “New Player” game mode in anticipation of fans who may be coming in to try the game because of the anime.

Additional changes also took inspiration from a recent community-backed tutorial mod spearheaded by Dota personality Jake “SirActionSlacks” Kanner. Valve has even included the community-made mod in their official tutorial at the end.

“If we see other similar activity in this space from the community, we'll look into adding it in the future as well,” the Seattle-based company said in the official Dota 2 blog.

Included in the update is a revamped tutorial that now includes in-depth mechanics, like creeps pulling, neutral camp stacking, and even item choices. Additionally, the update adds a glossary where players can read all the game’s mechanics to better prepare them for their first game.

Apart from the tutorial, Valve has also included a new simple look for the item shop. New players can now see recommended items immediately when they open the shop in-game. 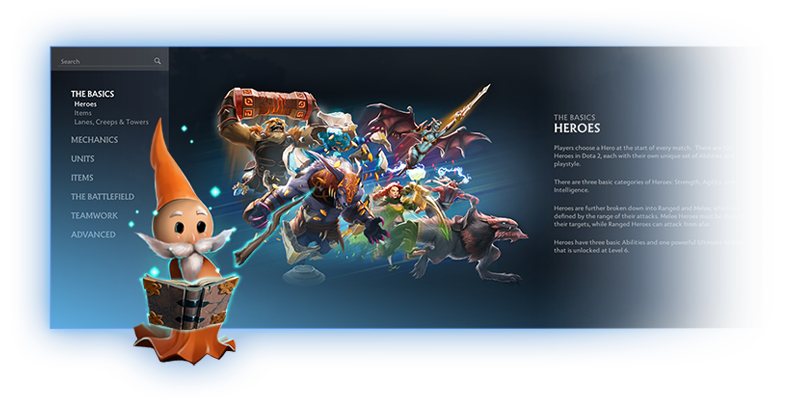 Undoubtedly, the most important feature Valve added is the new New Player Mode, where new players are matched to fellow new players. Previous patches merely threw new players along with veterans, who preyed upon them like sharks.

The New Player mode features a shorter queue time to attract new players. According to the company blog, if the queue time runs out, players will be placed in a game whether they have a complete lineup or not. Bots will substitute the missing players.

Players who also queued with a veteran will not be thrown in a veteran game. Instead, he and his partner will be placed in a lobby with bots to help ease him to the game.

Also in the New Player mode is a new chat feature, which Valve claims is moderated to avoid any of the usual player toxicity.

First timers will also receive in-game rewards (hero items and skins), as they try out the game and complete new player tasks.

Lastly, Valve has promised to drop the ban hammer on Smurfs. Starting today, smurfing will now be a bannable offense in Dota 2. Based on the blog post, Valve will primarily focus on accounts created after March 24, 2021, but will occasionally drop the hammer on older accounts which they find game-ruining.

Apart from in-game changes, the new player update was also passed on to the Dota 2 website, giving the site a much-needed facelift.