PARIS — The skies over Paris were yellow, ignited by a glorious golden sunset.

The partying fans' shirts were yellow, Colombians making themselves at home on the Champs-Elysees.

But the yellow that counted most was the iconic jersey that fit so snugly on the slim shoulders of Egan Bernal.

His crowning on Sunday as the Tour de France's youngest post-World War II champion, and its first from South America, heralded the birth of a new supernova in the cycling universe.

Winning a Tour for the ages at the unusually young age of 22 immediately prompted the question: How many more might he win?

Get this: He's younger than the Tour's greatest champions — five-time winners Jacques Anquetil, Eddy Merckx, Bernard Hinault and Miguel Indurain — all were when they were first crowned. Pity those in the peloton who also hope to win future editions of cycling's greatest race: They could be in for quite a wait.

"I am the most happy guy in the world. I just won the Tour de France, and, yeah, I can't believe it," Bernal said, looking bemused on the podium in the race winner's jersey and silhouetted by the splendid sunset.

The slightly built Colombian with a killer instinct on the road proved to be the strongest of the 176 strong men who roared off from the start in Brussels, Belgium, on July 6 on their 3,366-kilometer (2,092-mile) odyssey that delivered the most absorbing, drama-packed Tour in decades and confirmation that the prodigy Bernal is the real deal.

Riding a yellow bike, and cheered by Colombian fans who were partying even before he rattled up the cobblestones of the Champs-Elysees, Bernal crossed the line with his teammate Geraint Thomas, the 2018 champion who this year finished second. Steven Kruijswijk completed what Tour organizers said was the tightest podium in the 116-year history of the race, with just 1 minute, 31 seconds separating first and third places after three weeks of racing.

The 21st and final stage was won in a sprint finish on the famous avenue by Australian Caleb Ewan, the dominant sprinter of his first Tour with three stage wins. Keeping with race tradition on its final day, the 155 riders who survived the Tour rode at a pedestrian pace and in a joyful atmosphere before hitting the Champs-Elysees. Bernal chatted with French rival Julian Alaphilippe and raised a glass of champagne as he rode.

At the finish, Bernal fell into the arms of his family.

"I cannot believe it. It's just incredible. I am sorry. I have no words," he said through a translator. "I still can't understand what is happening to me."

"When I saw that he won, I said, 'I need to go with my music to support him,'" said clarinet-playing Colombian fan Sebastian Cortes, who traveled from Strasbourg in eastern France for the celebration. 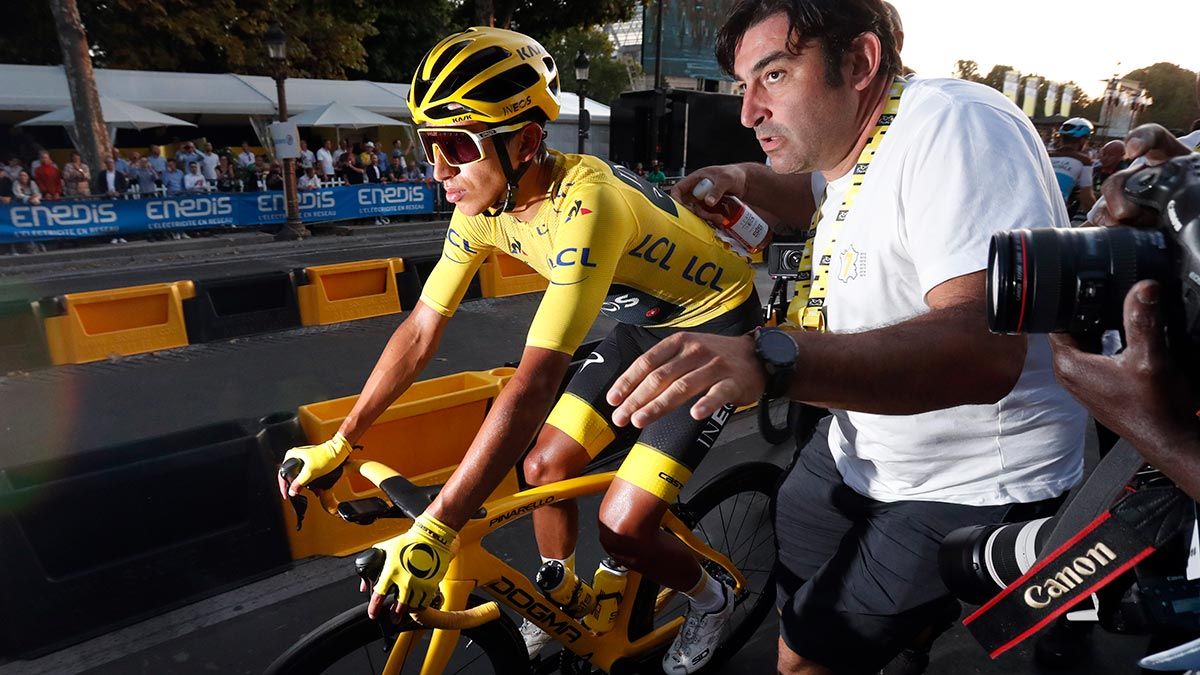 But millions of French fans who had lined the roads through east, central and southern France, and up into the thinning air of the Pyrenees and Alps, were ruing a bitter-sweet Tour.

First, their hearts soared with fabulous racing from French riders Alaphilippe, who held the iconic yellow jersey for 14 days, and Thibaut Pinot, who won on the first of seven 2,000-meter-plus peaks scaled by the highest Tour in history.

But joy turned to sorrow when Alaphilippe and Pinot's prospects of becoming France's first winner since Hinault in 1985 were cruelly dashed just two days before the grand finale in Paris, on an epic Stage 19 where Mother Nature became a party-pooping guest. An almighty dump of torrential rain and hail severed the Tour route just as Bernal was succeeding in ripping the race lead off Alaphilippe, who'd clung to it like a kid with a favorite toy.

"Julian Alaphilippe made us dream," said Celestin Simon, a Parisian who cheered his hero on the Champs-Elysees in a pointy hat of French red, white and blue. "Unfortunately, there's no victory at the end."

Alaphilippe, more than anyone, first ignited and then stoked what will long be remembered as a Tour of fireworks . With his goatee beard and can't-catch-me attacks that rivals couldn't match, Alaphilippe embodied "panache ," the old-school class so cherished by Tour fans.

Alaphilippe's enterprise first put him in yellow in Champagne country on Stage 3 and then, after he lost the lead on Stage 6, got him the jersey back on Stage 8, which he held through the Pyrenees and into the Alps.

And it was there that Bernal, raised at altitude in Colombia and at home in thinner air, struck.

Bernal flew up the Tour's highest climb, the dizzying Iseran pass at 2,770 meters (9,088-feet) above sea level, demolishing what remained of Alaphilippe's lead on Stage 19 and building a sizeable one of his own .

The watch was then stopped, with Bernal way ahead, when the hailstorm suddenly coated the route with ice, amid fears that riders on tires barely wider than their thumbs could skid off into the rock- and ravine-scarred Alpine décor.

Compounding the misery for France, Pinot abandoned the race in tears, hobbled by a left-thigh muscle tear . 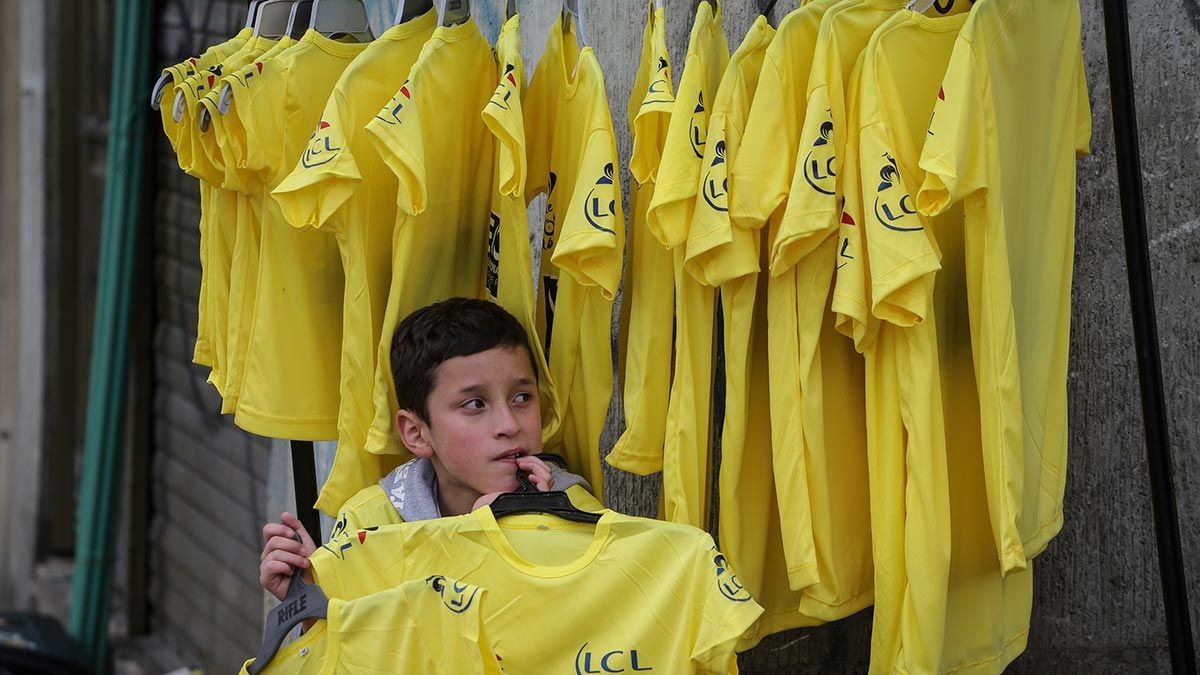 And that was that. The Tour that had been careening to a rock 'n' roll finish instead had the plug pulled on it. Landslides also truncated the last Alpine Stage 20, which still proved too long for the by-now exhausted Alaphilippe, who slipped off the podium entirely, despite getting words of encouragement in a call the previous night from French President Emmanuel Macron.

Thomas used the last Alpine climb to secure the runner-up spot in Paris, giving the Ineos team a podium 1-2 with Bernal. Third-placed Kruijswijk, a Dutch Mr. Steady, pulled off the feat of being wholly unremarkable during the three weeks, while Alaphilippe, Pinot and Bernal and others rocked.

Quite remarkably, none of the top four riders won a stage. Alaphilippe, in fifth, won two.

"Honestly, I prefer having won two stages and 14 days in yellow than doing nothing and finishing third," Alaphilippe said Sunday.

So instead of a red-white-and-blue celebration, Paris got painted in Colombian red, blue and yellow.

Lots and lots of yellow.