RANLEN Maglantay is much like any young kid with a simple dream of traveling around the country. But unlike most kids, the 18-year-old chases his dream while racing around Mindanao on two wheels, specifically an old, hand-me-down, eighties-edition Colnago bike.

The biggest surprise of all, he just might make his dream a reality.

The 5-foot-2 teenager, son of a frustrated cyclist turned bike mechanic, has been impressing cycling fans in Mindanao with his guts and determination while battling the cream of the crop in professional cycling in the first few stages of the 2016 LBC Ronda Pilipinas Mindanao leg.

The teenager is turning heads with his respectable finishes, a surprise considering his bike is a lot heavier - and way cheaper - compared to the pro' top-of-the-line, sponsor-issued bikes that easily fetch at least P200,000.

Ronda Pilipinas project executive director Moe Chulani is no doubt impressed to see the kid hang with the best.

If not for Chulani, the kid shouldn’t be racing here at all.

Chulani bared that Maglantay was initially denied a chance to participate in the elite race after the tour secretariat thought he was not old enough to qualify and tried to lie about his age.

"I saw him walk in front of me crying. So I followed him all the way to the parking [lot] of the hotel to ask him why. He said, 'Hindi po ako pinalaro, akala po dinadaya ko edad ko,' he was sobbing," said Chulani.

"So what I did was ask for his birth certificate, which was later sent to me by his parents, then I accompanied him back to the secretariat. Sobrang nakita ko sa bata yung frustrations, I was silently crying with him," he added.

Next, Maglantay could have chosen to race in the proper category, the under-23 bracket. But the kid’s bold enough to test his mettle against the pro-elite riders instead, and for good reason.

Chulani was initially taken aback by this move but is now confident about Maglantay’s brave decision, knowing how the young rider could have easily beaten the other competitors in the under-23 category.

"That's what surprised me. Kasi with how he is faring in the elite level, mani sa kanya yung under-23. Easy money for him. Kaso he wants to play against the pros, the stars of Philippine cycling and that in itself is unbelievable," he said of Maglantay, who is 35 minutes off the pace of overall leader Jan Paul Morales.

Maglantay doesn’t have the means to invest in his equipment, but what he lacks in funds, he more than makes up for in skill and the beloved Pinoy trait, diskarte.

Asked by SPIN.ph if he is willing to sell his bike for P100,000 or more, Maglantay was quick to say no.

Maglantay is inching his way closer to his dream, and he just might do so with a better set of wheels. As LBC's way of appreciating the determination of Maglantay, Chulani bared that they are now working on lending him a state-of-the-art bike.

"Yes, we're working on it already. This kid needs help, he has the heart, he has the potential. Sayang ang talent niya kung di natin tutulungan," he said. 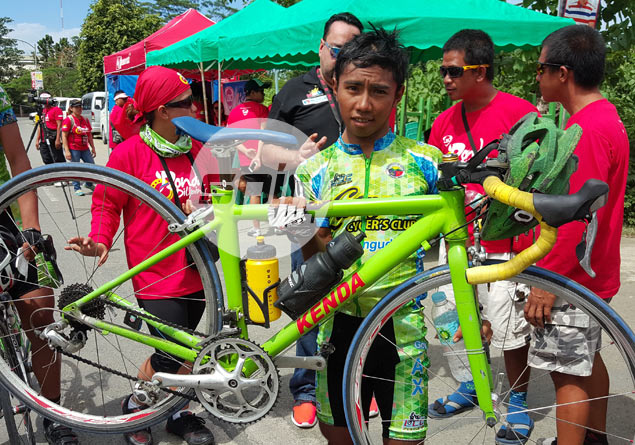