DAET - Marcelo Felipe was one exhausted rider by the end of Stage Two of the 7th Le Tour de Filipinas, yet the 7-Eleven Sava RBP rider remained confident about his title chances despite losing steam in the final stretch of the race on Friday.

Felipe along with one rider made a gallant chase to join a 12-man lead group entering the final 50 kilometers of the race’s longest stage - a 204.82 km route from Lucena City to this charming capital of Camarines Norte.

But the effort fell short as the weary Filipino failed to mount another breakaway, allowing Kazakhstan’s Oleg Zemlyakov of Vino 4-Ever Sko to win stage honors.

The 26-year-old Felipe still emerged as the best Filipino finisher in Stage Two, placing sixth with a time of 5 hours, 10 minutes, three seconds – or about a minute and 15 seconds behind the stage winner and yellow jersey holder.

Zemlyakov will wear the yellow jersey in Saturday’s Stage Three, a 185.79 kilometer race from here to Legazpi City.

Felipe, one of the country’s top bets in the race, admitted he spent too much energy chasing the lead group. He added a flat tire suffered by the 7-Eleven Sava RBP support vehicle slowed down his support team.

Felipe was so fagged out that he sprawled on the ground outside a nearby fastfood chain at the finish line to get some rest before being interviewed by reporters.

Felipe, who finished third in a stage of the Tour of Singkarak and Tour of Borneo last year, however, said it will still be a wide open race for Saturday’s Stage Three and eventually, the championship.

Rustom Lim of the Philippine national team is also in the top 10 of the general classification with a 1:57 time difference between him and race leader Zemlyakov. 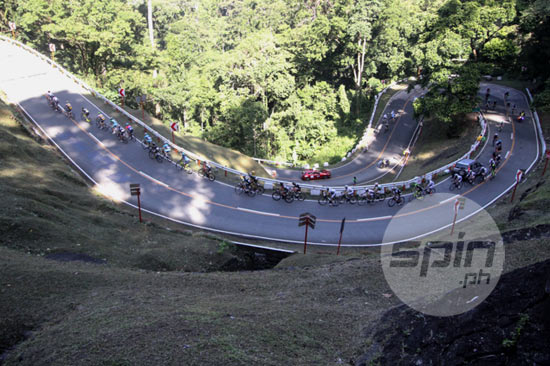