The Swiss rider powered away on the Suc au May climb, new to the 117-year-old Tour. He extended his lead by racing with hair-raising speed down the other side and held off pursuers over the last 25 kilometers (15 miles) to win Stage 12 by a comfortable margin in Sarran.

It was the 22-year-old Hirschi's inaugural victory at his inaugural Tour, after podium finishes on Stages 2 and 9. On the ninth stage, he also launched an early solo breakaway only to be caught by four riders near the end and then lost a sprint when he was overtaken in the final meters.

"It's hard to finds words. It's my first pro victory," Hirschi said. "I would never have believed that I could win here, a stage, at this age."

The Tour's top contenders, including yellow-jersey wearer Primoz Roglic, were more than two minutes behind when Hirschi finished the 218-kilometer (135-mile) stage into the Massif Central, one of five mountain ranges scaled by this Tour. French rider Pierre Rolland placed second, 47 seconds behind. Hirschi covered the distance in just under 5 hours, 9 minutes. 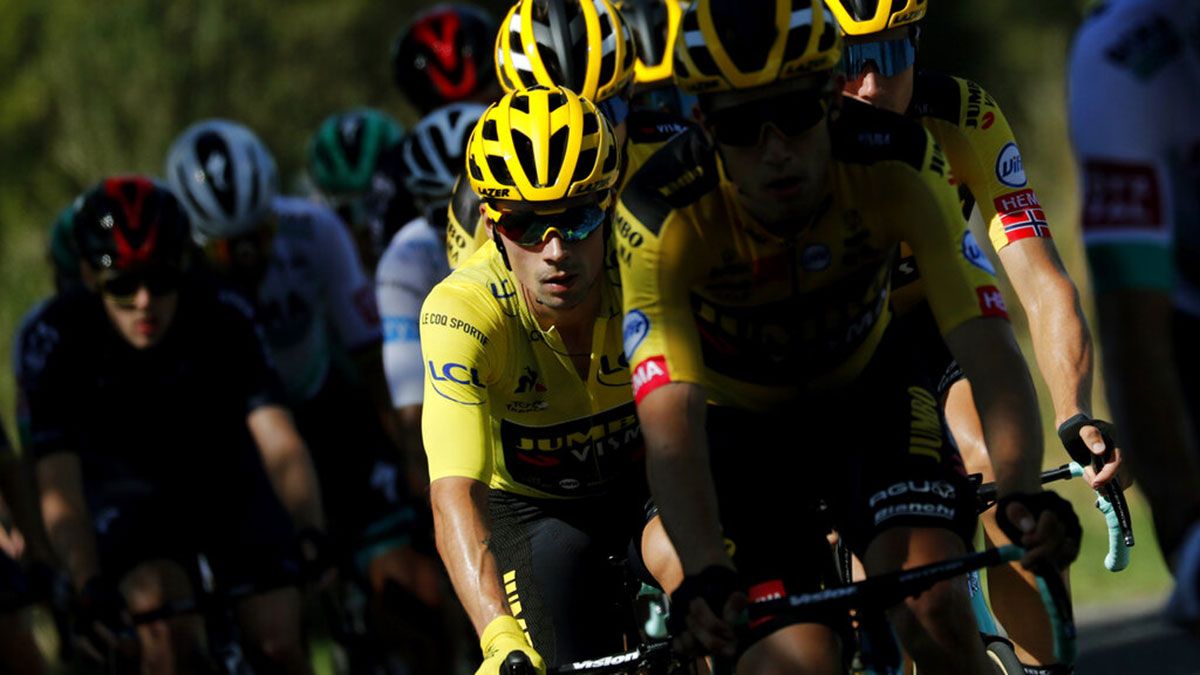 Primoz Roglic remains ahead of everyone else.

The stage paid homage to France's all-time favorite cyclist, Raymond Poulidor, by whizzing through his hometown where he died last November, Saint-Leonard-de-Noblat in west-central France.

Poulidor finished a record eight times on the Tour podium from 1962 to 1976 but never won and never wore the yellow jersey. He died at age 83.

The stage was rolling and largely flat for the first hour after the start in Chauvigny but got progressively harder as it veered southeast into the lumpy Massif Central.

The four relatively modest climbs of note were a foretaste of harder ascents that await on Friday. Stage 13 is a start-to-finish roller-coaster of seven noted climbs. The 191 kilometers (119 miles) end with a short but furiously steep ascent of the Puy Mary, the remains of a once-giant volcano that is liable to force top contenders into battle.

The final kilometers to the finish at 1,589 meters (5,213 feet) in altitude kick upward at a gradient of 15%, plenty steep enough for the strongest riders to open consequential time gaps over any rivals who struggle.

Roglic said he is bracing for "some fight and real racing."

"It's a hard stage," said the Slovenian former ski-jumper who won last year's Spanish Vuelta and placed fourth at the Tour of 2018.

Meanwhile, the Tour organizer confirmed Thursday that four teams which had staff members test positive for COVID-19 this week won't automatically be sent home if another staff member is positive in the next battery of tests.

Health rules for the race say teams can be sent home if they have two or more positive tests in a seven-day span.

But race organizer ASO confirmed that the day-counter will be reset to zero when teams are tested again on the Tour's second and last rest day next Monday.

That clarification lifts a weight off Cofidis, AG2R La Mondiale, Ineos Grenadiers, and Mitchelton Scott, the teams that each saw a staff member test positive on the first rest day.

Because they will all essentially be starting afresh in the next round of testing, a single positive test on Monday will not automatically trigger their exclusion, ASO said.

Any team that registers two or more positives could, however, still be sent home. The battery of tests will be the last before the Tour finishes on Sept. 20 in Paris.