DAET, Camarines Norte - Oleg Zemlyakov of Vino 4-Ever Sko capped his brilliant showing by pulling away in the final 10 kilometers and claim Stage Two of the 7th Le Tour de Filipinas 2016 on Friday.

The Kazakh rider, winner of last year’s Best Young Rider award, crossed the finish line all by his lonesome with a time of 5 hours, 8 minutes, and 48 seconds, as he broke away from a 12-man lead group to win the longest stage of the Tour this year – a total of 204.82-kilometer stretching from Lucena City to this capital town of Camarines Norte.

Zemlyakov will wear the yellow jersey entering Saturday’s penultimate stage of the race presented by Air21 from here to Legazpi City. He holds a total time of 9:12:17 after running away with the King of the Mountain honor in Stage Two which saw the riders passed through the dreaded ‘Tatlong Eme’ in Atimonan, Quezon.

Yevgeniy Gidich, also of Vino 4-Ever Sko team, finished runner-up, 16 seconds (5:09:04) behind his teammate, while Australian Jesse James Ewart of 7-Eleven Sava RBP finished third with identical clocking in the event which has Petron, MVP Sports Foundation, and Smart as principal sponsors.

Marcelo Felipe of 7-Eleven Sava RBP was the best Filipino rider to make the Top 10, finishing at sixth with a time of 5:10:03, while Rustom Lim of the Philippine national team checked in at 10th with clocking of 5:10:45.

Zemlyakov was part of the 12-man lead pack that included Felipe, before engineering a final breakaway entering the town of Talisay.

“I’m very happy that I won my first international race,” said the 22-year-old Zemlyakov, who was mobbed by local fans, who had their photos taken with the Kazakh rider moments after crossing the finish line.

Felipe got himself in contention for stage honor as he was able to join the 12-man first group in the final 50 kilometers, but lost steam to stage a final breakaway in the stretch.

All riders were given identical times of 4:03:39 entering Friday’s stage after the opening lap was stopped due to bad road conditions in Quezon.

Vino 4-Ever Sko also claimed the lead in the team general classification with a time of 27:40:34 or more than eight minutes ahead of second-running 7-Eleven Sava RBP (27:48:50) in the race that has Cargohaus, NMM, UFL, Philippine Airlines, Collab Printing Solutions, Autonation, Orangefix and Phenom as major sponsors. 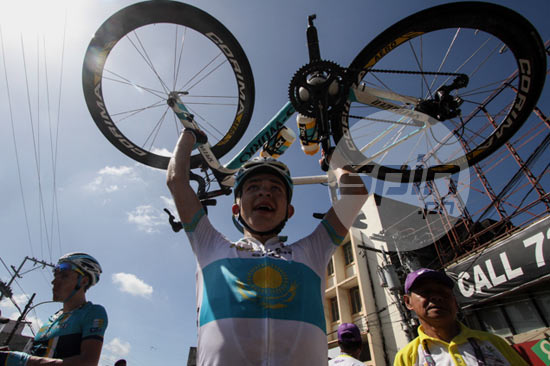