AS with most important moments in history, this episode in Philippine sports occurred with little fanfare. For the first time, a cricket team composed of Filipinos played an official cricket match when the Philippine development team took to the field against the Manila ‘Roos, a team of Australian expats.

More important than winning the Sixes match at the Manila Nomads Sports Club, the Filipino cricketers, composed of eight locals who have been training for the past two years and reinforced by three members of the all-expat Philippine national cricket team, served as proof that Filipinos can learn and compete in cricket, a sport practically unknown in the islands.

“There’s probably a little kid sitting in the barangay there, if they were given the opportunity, they could probably make a living in the game, a very good living and become a world-class superstar. They never would if they’re not discovered." -Iain Sinclair, PCA general manager

The Philippines, a former Spanish and American colony, was exposed to the sports associated with its former colonial masters - notably football, baseball and basketball. Cricket, being the English national sport, never had a chance to be played by the populace despite its widespread popularity in countries that were once part of the British Empire. 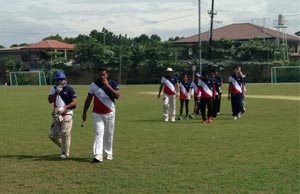 For the Philippines Cricket Association, the official governing body of the sport in the country, the challenge in developing the game is to get more people involved and to raise the level of participation.

PCA general manager Iain Sinclair explained the development team is a significant in growing the 'Gentleman’s Game' in the Philippines, a country they consider as having much “prospect” and “potential."

“There’s probably a little kid sitting in the barangay there, if they were given the opportunity, they could probably make a living in the game, a very good living and become a world-class superstar. They never would if they’re not discovered,” said Sinclair, who is also the coach of the Philippine national cricket team.

Unlike basketball, cricket is not a game that requires certain physical characteristics.

“It’s not the height - it’s about the skill set. There’s a goal for everyone in cricket and it’s not really a game of physical attributes which will not necessarily give you an advantage. What we’re trying to get over to people is this is a game where you don’t have to be very tall. A man who’s five-foot tall can play against a man who is 6’8” on equal terms.”

As an example, Sinclair mentioned Donald Bradman, who is considered one of the greatest cricket players in history. The Australian’s career Test batting average of 99.94 is a record that statistically is probably better than any other sport in the world and is often cited as the greatest achievement by any sportsman in any major sport.

The PCA has adopted several stages in promoting cricket in the Philippines - major initiatives are the all-expat national team that represents the country in international competitions, the mixed development team and a junior development plan.

The PCA is focusing on the junior level since it believes that is where it can get the next level of players.

“It’s like building a pyramid, you get a base and you build it up - the top of the pyramid is the national team and the bottom is the schools in the barangay playing cricket,” Sinclair said.

“We distribute free cricket equipment and provide free coaching to public schools. We look for schools that don’t have enough playing facilities so we provide an alternative for them. That there is something instead of kids who have no physical education or no sport at all. We try to make sure that whatever we provide is free of charge," said Faisal Khan, the first captain of the Philippine national cricket team.

Currently there are 5,500 local indigenous children enrolled in the program and with a target of 10,000 enrollees by the end of 2014.

Two full-time development officers are assigned the task of teaching cricket to school kids as their physical education subject as part of their curriculum.

Nerice Dela Cruz, a graduate of the UP College of Human Kinetics, was flown to Darwin, Australia to train and observe how cricket is taught in schools. She is the only female member of the development team.

“So far we have at least 12 schools. We mostly conduct the program in Taytay, Paranaque, Mandaluyong, Muntinlupa, Quezon City. We also conduct training for special Olympics,” Dela Cruz said.

Expansion this year will include schools in Pasay and private learning institutions such as the Mahatma Gandhi School, the British School, International School and Don Bosco Institute.

“Our big problem at the moment is facilities. We need more grounds. That is why we’re looking at places such as schools and universities,” Sinclair pointed out.

The Australian noted some college students are from India, Pakistan and Bangladesh who can help their fellow students learn to play the game, a sport adored by billions of fans worldwide.

To help speed up cricket’s development, the PCA is also looking at developing the game from the top.

According to Sinclair, the PCA is building “a pathway” but has some different views from the ICC.

“There’s conflicting views on how you do that - the ICC thinks you can build it from the bottom. We actually keep saying to them, ‘Well, look at the example of the Azkals.'"

Sinclair noted the case of the Azkals is how you build it from the top.

“There was no interest or only a marginal interest in football here but when the Azkals came along and suddenly football (became popular). You can actually build a developing game if you’ve got a successful national team and the publicity helps develop the game,” said Sinclair, a situation he says is “something a little bit unique to the Philippines."

“You speak to all these sports administrators and they tell you that the way to develop the game is from the bottom upwards but here it actually works the other way around, it’s the absolute opposite here and it goes against all the set protocols,” Sinclair noted.

The PCA approach is from both ends – it is trying to build a base but also recognizes that a successful national team raises the profile and brings sponsors on board.

“That’s the challenge - to get them to meet in the middle. At the moment we’ve got a base (the school program), we’ve got a pointy bit (the national team) and we’ve got to fill in that middle bit now,” Sinclair explained.

It is ironic that the Philippine national team, currently ranked 58th in the world (compared the Azkals’ all-time high ranking of 127th) is composed entirely of foreigners (under ICC rules, foreigner who have lived at least seven years as a resident of an affiliate member such as the Philippines can represent the country in competitions).

In 2011, the Philippines took part in the East Asia-Pacific Division Two tournament in Samoa where the national team finished second in their first international cricket competition. The historic and noteworthy achievement could have been fully embraced by Filipinos as their own if they had an actual Filipino they could identify with on the team.

Khan said the national team is slowly starting to add Filipino citizens and reducing the number of foreigners in the team. The PCA said it already has identified players with biological Filipino parents who grew up playing cricket and have Philippine passports and will soon be part of the team.

A Pakistani national who has lived in the Philippines for more than 26 years, Khan married a Filipina and has raised his family here, has his business here and speaks fluent Tagalog, cannot wait for "full" Filipinos to take up the sport he dearly loves.

“We’re practically expatriate guys and few guys with Philippine passports. We want the indigenous side in the next 10 years.”

(If you want to learn more about the Philippines Cricket Association, click on: https://www.facebook.com/pages/Philippines-Cricket-Association-PCA/345753922127938)