THIS was one tournament that did not lack for cheer.

After all the stunts, tosses and pyramids, the School of the Holy Spirit emerged as the biggest winners among the 52 teams that competed in Day One of the National Cheerleading Championship last Saturday at the Arena in the Mall of Asia.

Cradling the three trophies on the competition floor while celebrating with his charges, SHS coach Randell San Gregorio was ecstatic after his girls’ achievements.

“The three wins are great pero all glory to God for this. Nag-struggle kami with the preparations and all but the kids managed to pull it off with flying colors,” he said.

“It’s a 50-50 effort- 50 percent from me and 50 percent from the team. There’s no secret, kailangan lang dedication and hard work. Yung grade school is really strong, they had a perfect run, the difficulty of the high school is really high kaya despite the falls lumamang kami and Sayawatha was really good,” the curly-haired and amiable coach said. 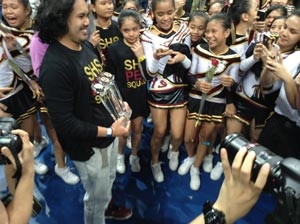 NCC director Paula de la Llana-Nunag said the ninth year of the national finals drew a field of more than 90 teams, the largest so far that required them to have multiple judging panels composed of International Cheerleading Union (ICU) judges for the first time. Day 2 is on Sunday and will feature coed teams from high school and college.

Saturday was an All Girls thing for the cheerleading teams and competition as young female performers worked in teams as they tried to outduel their competitors with feats of dexterity, skill and coordination to celebrate team spirit and school pride.

One of the highlight events, the High School Division finals saw School of the Holy Spirit win its third title in five years. St. Paul College came in second while Poveda completed the podium finishers.

In the Coed Elite, defending champs Highland Elite All Star Warriors from Baguio City repeated their 1st place finish over rivals Central College of the Philippines and the Altas Battalion Royales.

The Lamba Central Elementary School Chevettes from South Cotabato were threepeat winners in the Peewee Division.

It was a battle of La Salle schools in the College All Girl division with DLSU taking first place followed by the College of St. Benilde.

In a new division, College poms went to De La Salle Lipa while Poveda won in the High School category.

Notre Dame of Dadiangas University of General Santos City successfully defended its in the College Coed Hiphop Division. Coming in second was the UE Extreme Squad while Taguig City University came in third.

First place in the All Girls College Division went to Lyceum Laguna.

After all the awards were handed out, the teams and their supporters rushed to the competition floor and celebrated their respective wins, taking selfies and performing preps for photos.

When it comes to celebrating, never underestimate cheerleaders.