FOR the first time, a cheerleading team from the Philippines will compete in the annual World Cheerleading Championships in the US.

The all-girl Team Pilipinas will be flying to Orlando, Florida on Monday for the April 24-25 event set at Walt Disney World and covered by television giants CBS Sports and ESPN.

For the past four years, Team Pilipinas has participated in several competitions in Australia, Singapore and Malaysia. From 2011 to 2013, the squad has won gold medals in the South East Asian Cheerleading Open in Singapore.

After dominating Southeast Asia, the Philippines has now set its sight on what is the biggest international cheerleading competition in the world.

Organized by the International Cheer Union (ICU), the 2014 Cheerleading Worlds gathers over 17,000 athletes from 80 countries and more than 150 divisions. It is considered to be the ‘Olympics’ of cheerleading.

There will be a slightly delayed webcast of the World Championships starting on April 24 at 2 a.m. Manila Time via www.cheerunion.org.

NCC instructor/ judge Celine Tanjuatco, the country representative in the 2011 Worlds, said that the event is “100 times bigger than what we have here" and that Team Pilipinas should expect “a whole lot of fun and a high level of competition.”

She said the girls possess almost the same skill level of their foreign counterparts and judges would look at execution and quantity ofaccomplished stunts. 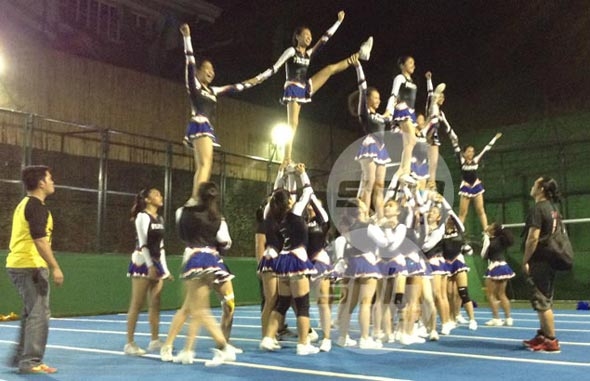 Perennial favorites are the US, Canada, Japan and Thailand.

Team Pilipinas will be participating in two divisions - All Girl Group Stunt and All Girl Elite.

The 27 members of the team are high school and college students who were selected in national tryouts held last December. Among the schools represented are St. Paul College Pasig, School of the Holy Spirit Q.C., University of Santo Tomas and Ateneo.

The team is headed by coaches Eduardo David Jr. and Randell San Gregorio.

Despite being a first-time competitor, expectations are high for the country’s team.

Delegation head JR David said they can bring home the bacon as long as they focus on delivering a “good show and a clean routine” in the stunts, tosses and pyramids.

“The Worlds is is what every cheerleader aspires for. It all boils down to proper execution. Filipinos are good natural dancers and we are looking at that as one of our advantages,” he added.