THE heavyweight division, which crowned its first gloved champion in 1885, is widely considered as pro boxing’s premier weight class. Colorful and talented heavyweight champions like John Sullivan, Jack Johnson, Jack Dempsey, Joe Louis, Rocky Marciano, Joe Frazier, George Foreman, and Muhammad Ali carried the sport on their massive shoulders and pushed its popularity beyond the parameters of the squared circle.

There is the old saying that when the heavyweights sneeze, the boxers in the lower weight classes end up catching a cold. Simply put, boxing cannot survive without the big boys. Then again, this has not been the case in recent memory. After the heavyweight division plummeted into oblivion with the end of the Mike Tyson era, the lower-weight fighters picked up the cudgels for the sport. Oscar De La Hoya, Manny Pacquiao, Floyd Mayweather Jr. are some of the fighters in the lower rungs who kept the sport alive while the heavyweights were in a state of comatose.

Well, don’t look now, but the heavyweights appear ready to reclaim their elite status in the fight game. The reason for the sudden surge in interest is the emergence of a potential super fight between World Boxing Council (WBC) champion Deontay Wilder of the US and World Boxing Association (WBA)/International Boxing Federation (IBF) titleholder Anthony Joshua of the United Kingdom.

The record books show that the last mega-fight in the heavyweight division took place on June 27, 1988, when unbeaten champions Tyson and Michael Spinks squared off for all the moolah in the weight class. Tyson silenced Spinks in just one round and for some time reigned as the sport’s biggest star.

The Wilder-Joshua pairing comes close to matching the hysteria the Tyson-Spinks buildup created. Not a few are even saying that Wilder-Joshua may end up being one of the most brutal slugfests in the history of the division.

Just take note of the fighters’ imposing records: Wilder is 39-0 with 38 knockouts while Joshua has a perfect 20-0, 20-knockout ledger. The 32-year-old Wilder, who played basketball and football in his early years, offers unpolished skills and a defense that has many leaks as the Titanic, but his size (6’7”) and brutal punching power can demolish just about every massive iceberg in the Artic region. Joshua, 28, picked up the sport at the late age of 18, but he breezed through the amateur ranks and won a gold medal in the 2012 London Olympics.

Wilder and Joshua have been obliterating foes since they turned pro. Wilder has been criticized for taking on handpicked foes, but he won the WBC crown in 2015 and has since made six successful defenses, all by knockout. Joshua won the IBF title in April 2016 and has made four defenses, all within the distance. Last April, Joshua rumbled with veteran Vladimir Klitschko and carved out a riveting 11th-round knockout win to unify the IBF and WBA titles. 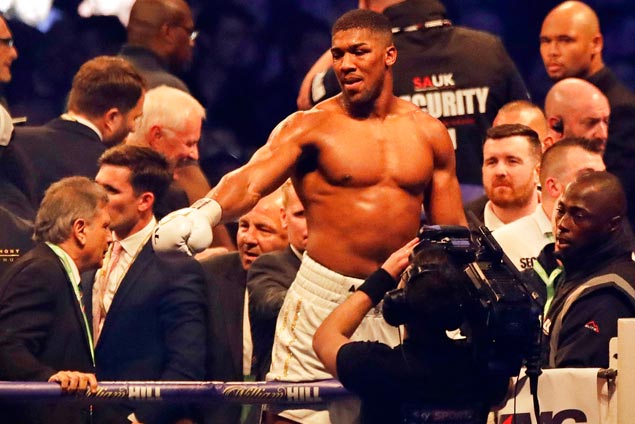 Wilder has made known his intention to fight Joshua in a unification showdown, but Joshua is mired in a situation that may prevent the fight from happening in a snap of a finger.

Joshua holds two titles (WBA, IBF) and may end up getting a third one if he beats WBO champion Joseph Parker on March 31. As the holder of multiple belts, Joshua is obligated to defend the crowns on a rotating basis. This means that even if Joshua beats Parker, he will be required to defend the WBA or IBF crown next. The head honchos of the WBA and IBF are not likely to give up their share of the sanctioning fees and allow Joshua to take a break to face Wilder.

There is also the promotional red tape to deal with. Wilder covets the fight but has accused the promoter of Joshua, Eddie Hearn, of protecting Joshua by offering him another British challenger. Wilder avers that Hearn is scared to lose his gravy train.

It will all boil down to how badly Wilder and Joshua want the fight and the accompanying public clamor. They may have no choice but to take on each other considering the scarcity of quality contenders in the heavyweight division. As of this writing, Wilder is booked to defend the WBC title on March 3 against 38-year-old Cuban power puncher Luis ‘King Kong’ Ortiz. It’s a good scrap, but Wilder knows that it is a fight against Joshua that will command top dollar.

The last thing the public wants is for Wilder-Joshua to end up like Riddick Bowe-Lennox Lewis. Back in the 1990s, there was a clamor for heavyweight champions Bowe and Lewis to fight, but American Bowe opted to vacate the crown rather than face Briton Lewis who had knocked him out in the amateur ranks.

For the sake of the heavyweight division, let’s hope Wilder-Joshua will not suffer the same fate.