Why Terence Crawford, not Golovkin, is the best choice for Pacquiao

IT has been almost a decade since Manny Pacquiao moved up in weight and while he nearly pitched a shutout in beating Mexican Antonio Margarito for the vacant WBC super welterweight (154 lbs.) championship in November 2010, it was not really a walk in the park.

Pacquiao had to consistently box and punch from different angles for all 12 rounds against the bigger Margarito. He rocked Margarito in the fourth stanza but made it a point to avoid going gung-ho on offense. In the sixth round, there was a collective sigh of relief from Filipino fight fans when Pacquiao survived a hellacious body shot from Margarito. When the rosin settled, Pacquiao won by a unanimous decision and walked away with his eighth division championship, but he never bothered to defend the super welterweight belt and promptly returned to the welterweight (147 lbs.) class.

Except for the one-fight cameo at super welterweight, Pacquiao has been a resident of the welterweight division since November 2009 when he beat Miguel Cotto for the WBO crown. Today, Pacquiao is on his fourth reign as welterweight king, beating Keith Thurman in his last outing (July 2019) to earn recognition as WBA ‘super’ welterweight champion.

Don’t look know, but some ten years after the Margarito fight Pacquiao is apparently feeling the urge to move up in weight again. Trainer Freddie Roach recently floated the idea of Pacquiao moving all the way up to the middleweight (160 lbs.) division to take on IBF king Gennady Golovkin (40-1, 1 draw, 35 knockouts). 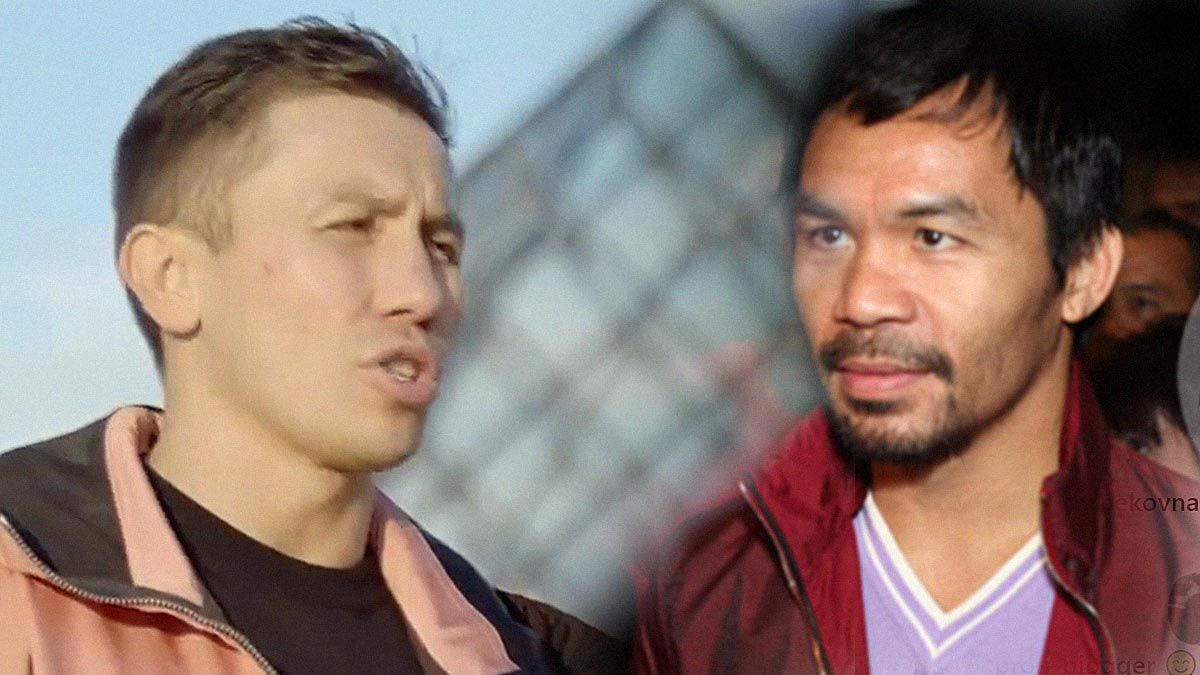 Pacquiao already holds the all-time record with eight division titles (6 crowns, 2 lineal versions) but the temptation to collar a ninth is turning out to be irresistible, what with the prognosis that Golovkin may have seen better days.

Golovkin, 38, was once the most feared puncher in boxing. Between 2008 and 2017, he scored 23 straight knockout victories. Golovkin’s cloak of invincibility, however, was left in tatters when Mexican Saul ‘Canelo’ Alvarez defeated him in their second match in September 2018.

In his last outing, October 2019, Golovkin struggled to beat Sergiy Derevyanchenko for the vacant IBF middleweight crown. Golovkin won on points but absorbed more blows than any previous fight in his career. Derevyanchenko’s speed and mobility also made Golovkin look really old. In the fifth and sixth rounds, body shots from Derevyanchenko visibly hurt Golovkin.

Golovkin claimed he suffered from the flu going into the fight, but his pedestrian performance against Derevyanchenko is likely to be cited by Roach as the best evidence that Pacquiao has a chance of winning the IBF crown. Golovkin may be ripe for the taking.

Let’s get one thing straight, though: Golovkin may be shot, but he is not as shopworn as Margarito was when the Mexican faced Pacquiao in 2010. Margarito’s use of loaded gloves was discovered in January 2009 and he was promptly knocked out by Shane Mosley. Margarito was never the same fighter after being exposed as a fraud. Many in fact attributed Margarito’s power to his loaded gloves.

Margarito offered the mobility of a tree against Pacquiao and it became easier for the Filipino to outbox the stoic Mexican. Unlike Margarito, however, the 5’10” Golovkin comes in throwing short and devastating punches. Golovkin is also a natural middleweight who had defeated a slew of legit 160-pounders.

To challenge for the middleweight crown, Pacquiao will have to add 13 pounds to his current 147-pound frame. To somehow even the odds, Roach is proposing a “catchweight” clause. It will be recalled that Pacquiao-Margarito was also fought at the catchweight of 150 pounds. Margarito was a legit 154-pounder or super welterweight, but he agreed to shed four pounds to meet Pacquiao halfway. Pacquiao actually weighed-in at around 144 pounds, meaning he was not really a super welterweight when he fought Margarito. You can already see the problem with these catchweight clauses: the winner’s claim to the title is actually half-baked.

Golovkin is unlikely to accept a catchweight clause. He is already 38 and the last thing he wants is to shed weight. Also, unlike Margarito who accepted the catchweight stipulation because the Pacquiao fight was only the big money bout left in his career, Golovkin has several big money fights to choose from. A third match with Alvarez remains on the table. Golovkin is looking at instant redemption if he beats Alvarez, not to mention a megabuck fourth showdown. On the other hand, if Golovkin beats Pacquiao, fans will just dismiss it as another case of a big man beating a little man.

From where this writer stands, WBO welterweight king Terence Crawford is the best opponent for Pacquiao. Crawford is unbeaten at 147 pounds but has not really been tested. In his last fight, December 2019, Crawford also displayed some vulnerabilities in stopping Egidijus Kavaliauskas in nine rounds. Crawford, 36-0, 27 knockouts, absorbed more punishment than usual and was even hurt in the third round.

Crawford is not as big as Golovkin and Pacquiao has a better chance of surviving the American’s power shots because he had already faced some of the meanest punchers in the weight class (Cotto, Shane Mosley, Thurman). It will be different against Golovkin because it will be the first time Pacquiao will get a taste of a middleweight’s true power.

More importantly, there will be no catchweight clauses in a Pacquiao-Crawford unification fight. If Pacquiao beats Crawford, no critic will dare say that he did so because he asked the other guy to shed weight.

Of course, if Pacquiao pursues a fight with Golovkin sans any catchweight demand, that will make for a very interesting future story. But for now, Crawford makes for the more practical, if not safer, choice.