Mayweather mouthguard cost $25,000 and trimmed with gold; Pacquiao's adorned with PH colors and is free

LOS ANGELES – If Floyd Mayweather’s mouthpiece cost him US$25,000, Manny Pacquiao is getting his free of charge.

Doctor Ed De La Vega will again provide Pacquiao’s customized mouthguard for free as his way of honoring the country’s most beloved sports hero for the honor he has brought to the Philippines.

A longtime US resident, De La Vega has been the official provider of mouth piece for Pacquiao in all of his fights since his first meeting with Mexican Eric Morales over a decade ago.

The Filipino dentist also took a dig at Mayweather’s much-ballyhooed mouthguard trimmed with diamond, gold and dollars made by Manhattan-based dentist Lee Gause.

For Pacquiao’s mouthguard for the Mayweather fight, the Filipino dentist said he again used the four colors of the Filipino flag, which is red, white, blue, and yellow.

But instead of separating the colors in different layers, De La Vega explained he decided to just mix them up.

“By mixing them, it show there’s a lot of mixture of people who are supporting him, the blacks, whites, Filipinos, Latinos. That’s what I tried to project when I mixed the colors in his mouthguard,” he said. 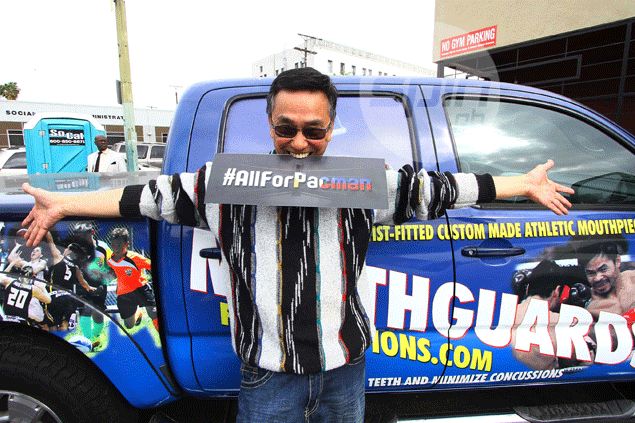 And unlike the extravagant Mayweather mouthpiece, the one for Pacquiao is just a simple one.

“It’s a regular, simple mouthguard that is really meant to protect him (Pacquiao),” said the veteran dentist.

If he’s going to send the bill to Pacquiao, De La Vega said the mouthguard normally cost around $500.

“But I never charged Manny eversince. I get tickets,” he said with a laugh, although with the high cost of tickets for the Mayweather bout, he doubts if he’ll ever get one.

“But not this time,” added De La Vega.

Two cerebral palsy patients wait seven hours for Pacquiao outside gym. Then this