LOS ANGELES — Tyson Fury leaned into the microphone and issued an audacious prediction to Deontay Wilder regarding their heavyweight rematch.

Wilder replied by picking up his own microphone and loudly sniffing it, mocking Fury for his past problems with drug abuse.

When these two unbeaten heavyweights got together in downtown Los Angeles on Monday, they picked up right where they left off across the street in December 2018.

Their thrilling split draw at Staples Center has led to a rematch Feb. 22 in Las Vegas, and both men claim they expect a knockout victory in what's likely to be the most-anticipated heavyweight title fight in recent years.

Although both fighters are skilled in the craft of promotional hyperbole, it was still a surprise when Fury (29-0-1, 20 KOs) declared he can knock out Wilder within the first six minutes at the MGM Grand Garden Arena.

A knockout prediction is no surprise at all coming from Wilder (42-0-1, 41 KOs), whose peerless punching power dropped Fury twice in their first bout. The fight's most memorable moment was Fury's stunning rise from a 12th-round knockdown that had left him flat on his back.

"I'm prepared for more than ever," Wilder said. "I told Fury two years ago I was going to baptize him, and I did just that. Rising up is part of the baptism. I told him he was going to go, 'Timber!' And he did just that. This time around, it's called unfinished business. He won't be able to get back up. This time, I'm going to knock him out." 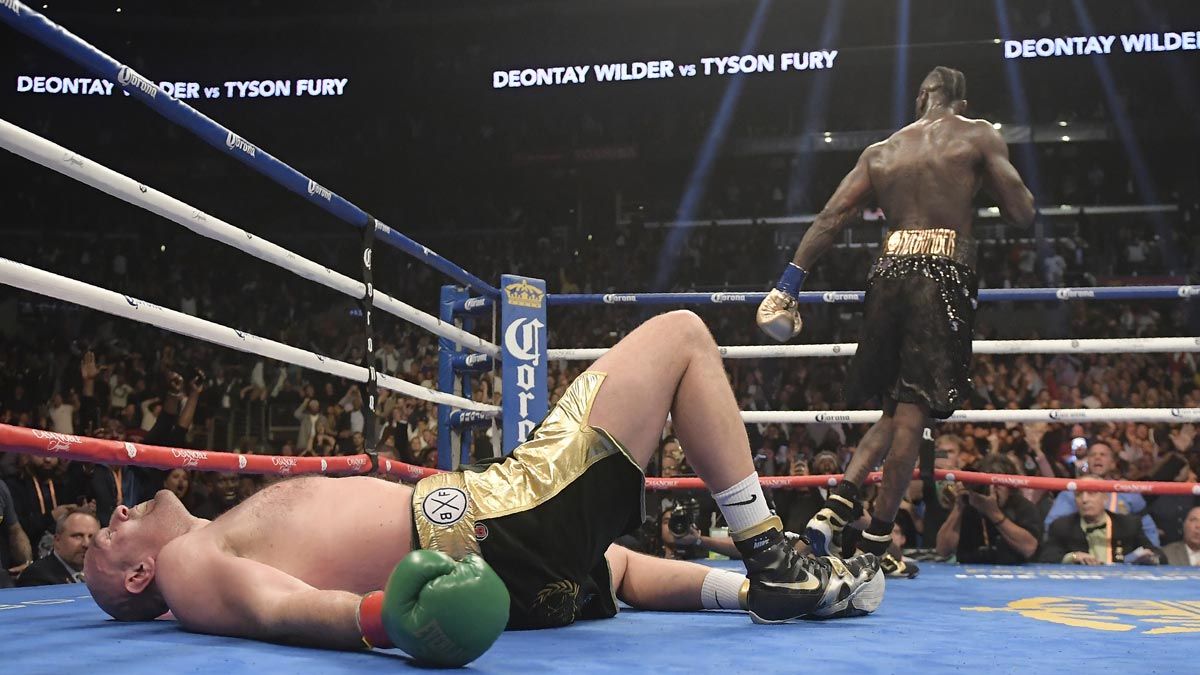 Aside from the fighters' charismatic personalities and their penchants for wild public statements, this matchup is fascinating because it pits Fury's boxing skills — which are impressive for any fighter, let alone a hulking heavyweight — against Wilder's ferocious punching power, which is likely unmatched in the sport.

Fury nearly won the first bout with his impressive movement and activity, but Wilder's strength proved to be an equalizer.

Fury would have claimed a decision on the scorecards if he hadn't been knocked down twice, yet Fury insists he must win by knockout to get a decision in the U.S.

He even changed trainers and hired a nutritionist with a knockout in mind, moving from trainer Ben Davison to Javan Hill, a nephew and disciple of the late Emmanuel Steward.

"I can't win a decision here, and I accept that," said Fury, who won a decision in Las Vegas four months ago. "I'm going for a knockout because thinking I won the fight ain't enough. I need to know. Thinking it doesn't count. I need to end the fight."

Fury believes he hurt Wilder several times in their first bout, but said he "just didn't have the gas" that would have been necessary for a knockout. He believes he can find that extra reservoir of strength this time, even if he has to abandon the boxing skills that served him well for most of the first fight.

Wilder is aiming for a knockout, but he also believes he can win a decision. He also feels the first fight should have been stopped due to a deep cut on Fury's face. In fact, Wilder thinks he would have won the first fight on the scorecards if he hadn't given away a few early rounds by coming out "overexcited and anxious."

"But when you have devastating power like I do, you don't worry about rounds," Wilder said. "He's got to survive 12 rounds with me."

Wilder also suggested Fury's bravado masks the British boxer's worries about his chin and his American opponent's ferocity. Wilder points to Fury's less-than-impressive effort against Sweden's Otto Wallin in September as a sign of his decline.

"When you get knocked down like that, and you don't know how you got on the ground, let alone how you got up, it's scary," Wilder said of his 12th-round knockdown of Fury. "It's not only scary for you. It's scary for your friends, your family, because they know you're going in there with that monster."