Mayweather camp better not do anything foolish: 'Boy Kapre' PJ Ramos will accompany Pacquiao to the ring

IF Floyd Mayweather Junior will have singer Justin Bieber by his side when he climbs the ring on May 2, Manny Pacquiao will have somebody bigger - literally - in his pre-fight entourage.

Team Pacquiao plans to have 7-foot-3 KIA Motors import Peter John Ramos in the Filipino boxing icon's entourage when he enters the ring at the MGM Grand for his May 3 megafight against Mayweather.

Kia team manager Eric Pineda told Spin.ph Pacquiao likes his idea of having Ramos in the entourage as a reward after the soft-spoken Puerto Rican did wonders for the Carnival team where the boxer is playing coach.

In the past, the Pacquiao camp has included WWE star The Undertaker (Mark William Calaway) and another wrestling star, Fil-American Dave Batista, in the pre-fight entourage.

Ramos, though, is much, much bigger.

Pineda said the hulking Ramos, who the team fondly address as 'Boy Kapre,' can also play the role of bouncer in the event something untoward happens during the pre-fight introductions.

[See Pacquiao picks up the pace in training. See GALLERY]

The decision to include Ramos in the entourage is also one of the resons why Kia would wait until after the Pacquiao-Mayweather fight before resuming practice with their dominant import.

Meanwhile, KIA is now looking at Dong Geun Yang and Chang Yong Song, Kia’s Ulsan Mobis players in the Korean Basketball League, and Taiwan’s Jeff Chang as possible Asian import for the Governors’ Cup, which will kick off on May 5. 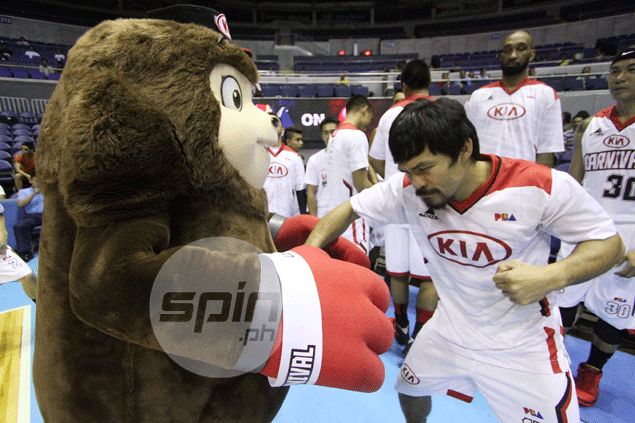