LAS VEGAS – For one last time before they finally climb the ring, Manny Pacquiao had the chance to size up how big Floyd Mayweather is compared to him.

Pacquiao had to look up a bit at Mayweather when the two had their traditional staredown at the center of the stage shortly after both easily made the welterweight limit Friday during the official weigh-in for the 12-round match.

Cheered on by majority of the animated 11,500 crowd that packed the MGM Grand Garden Arena, the Filipino was obviously the smaller of the two, giving away about two inches in height against his unbeaten opponent from Grand Rapid, Michigan.

But Pacquiao, wearing a red track suit matched with white shirt with the bold letters MP written in front of it, said he’s hardly fazed by the height advantage enjoyed by Mayweather.

“I’ve been fighting bigger guys like Antonio Margarito, Miguel Cotto, and Oscar De La Hoya. It doesn’t matter to me,” said Pacquiao, who was time and again cheered on by the crowd chanting his name Manny!, Manny!, Manny! with apl.de.ap's hit song ‘Bebot’ blaring in the background.

Michael Buffer introduced Pacquiao on his way to the weighing stage.

Unlike Pacquiao who frequently smiled and waved to fight fans, Mayweather kept a subdued mood during the weigh-in, which cost people US$10 per ticket - and as much as $500 in the secondary market - to get a glimpse of the two most popular boxers in the world today.

Wearing a blue jacket over a blue track suit, the usually brash-talking Mayweather that people around the world had grown accustomed to, was nowhere in sight.

Witness the sights and sounds of the weigh-in in this Spin.ph video:

Except for the constant pounding of his chest and flashing the No. 1 sign, Floyd displayed a pensive aura during the proceedings that took just about 10 minutes to complete.

He carried a serious look the moment he was ushered in to the stage until his post-weigh-in interview with veteran broadcaster Jim Gray that he admitted not knowing what Pacquiao told him when they had their face-off at the center of the stage.

"I don't know what he exactly said," said Mayweather, who was introduced by Showtime resident announcer Jimmy Lennon.

Gray told Mayweather Pacquiao thanked him for making the fight happen, to which Floyd didn’t response.

But he did say he’s ready on Saturday (Sunday, Manila time) after tipping in the scale at 146 lbs.

“I dedicated myself to the sport of boxing for the last 20 years and I’m ready,” said the 38-year-old Mayweather.

“It’s time to get out there and prove ourselves.”

Pacquiao, who came in at 145 lbs and was the first to enter and be weighed in, said he and Mayweather carry a great responsibility to give the fans a good fight.

“Boxing fans, whether for Pacquiao or Mayweather, you deserve a good fight,” he said. 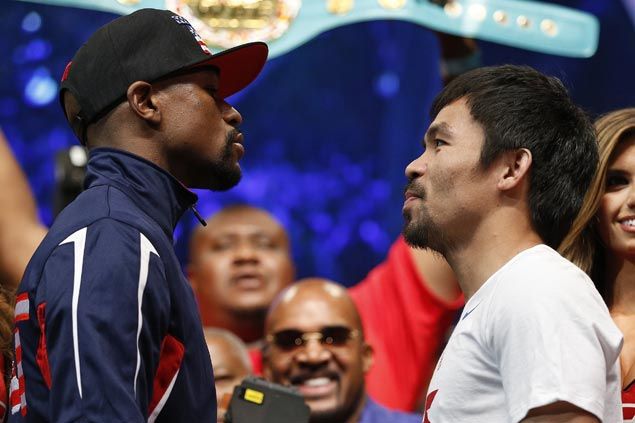