HE’s a self-made billionaire and currently one of the richest athletes in the world.

One good thing about boxing legend Manny Pacquiao is that he doesn’t fail to look back on where he came from.

Just this week, Ubatay and fellow former boxers and friends of Pacquiao from his early days in the Sampaloc visited the boxing great in his Dasmarinas mansion in Makati the moment restrictions were lowed to General Community Quarantine (GCQ),

The Filipino boxing superstar, who was involved in the richest fight ever in boxing history along with Floyd Mayweather Jr., was more than willing to give them some monetary help to tide them over in this hard times.

Ubatay, who works as a boxing trainer in a fitness gym near Ateneo, thanked his long-time friend for being true to his words.

Ubatay and Pacquiao boxed together at the LM stable in the 90s during the time ‘The Pacman’ was still a relatively unknown and fighting in the weekly boxing show ‘Blow By Blow.’

Ubatay vividly remembered what his friend told him back in those days. 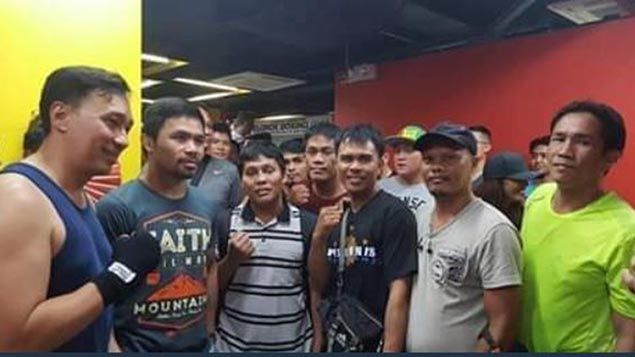 Since gyms and fitness centers are among those hardest-hit by the pandemic, Ubatay was denied a daily wage after the entire Luzon was placed under an Enhanced Community Quarantine starting last March.

But it was not only Ubatay who struggled to make ends meet. Other former LM gym boxers like Edward Escriber, Flash Morillo, Eugene Gonzales, also pleaded for help.

The video post somehow also reached other boxing people, including a manager, promoter, referee, and even a soldier, who likewise extended help to the group, either financial or in kind.

As to the LM gym where Ubatay and the other boxers forged their life-long friendship with Pacquiao, the fitness center located at Paquita St. in Manila has been moved to the MP Tower Building.

Its new owner is Manny Pacquiao himself. Its new name? The Team Pacquiao boxing gym.