Brash Magdaleno has long been calling out Donaire. Now he gets shot at 'Flash'

NONITO Donaire Jr. is aware challenger Jessie Magdaleno has been calling him out for a long time.

Come November 5 at the Thomas and Mack Center, the ‘Filipino Flash’ has vowed to give the young unbeaten American what he has been asking for - and more.

Donaire stakes his World Boxing Organization (WBO) super-bantamweight title against the 24-year-old Magdaleno in an undercard showdown that has the potential to steal the thunder from the main event featuring Manny Pacquiao against Jessie Vargas.

The 33-year-old Donaire said he’s looking forward to the 12-round match since he’s been aware how Magdaleno has long been calling him out.

“Jessie is a great challenger, a mandatory title defense, and I know he’s hungry because he has been calling me out on social media,” said Donaire on Tuesday (Wednesday, Manila time) during the press conference luncheon for their title bout held in Los Angeles.

This will be the first ring appearance of the Filipino boxer from Talibon, Bohol since scoring a third round TKO of Zsolt Bedak last April in Cebu.

His team is aware it’s not going to be an easy fight as Magdaleno carries an impressive 23-0 record, with 17 KOs.

“Nonito is one of the greatest boxers of all time,” his manager Cameron Dunkin stressed. “He’s fought the best and he’s beaten the best. He’s faced many tough challenges. This is a very tough challenge but this is what Nonito does.” 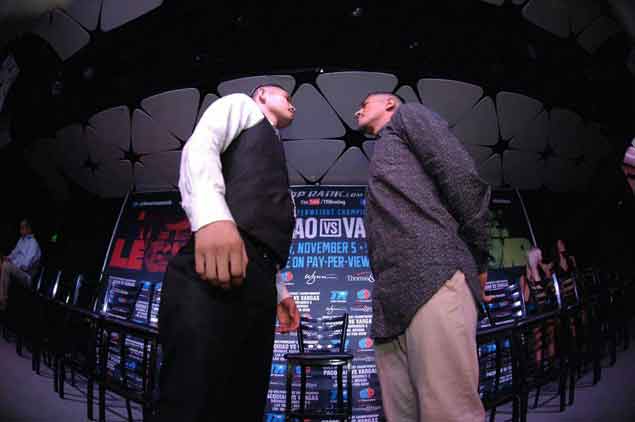 While he felt honored being on the same ring as Donaire, Magdaleno said the match could be the culmination of his long cherished dream to become a world champion.

“As a kid, I’ve dreamt of this moment and the time is finally here,” he said. “On November 5th, I will be victorious with my hands raised up high and a belt around my waist.”

Donaire is not the only world champion fighting in the Pacquiao-Vargas undercard.

Mexican Oscar Valdez (21-0, 18 KOs) will be making the first defense of his WBO featherweight crown against No.1 contender Hiroshige Osawa of Japan (30-3-4, 19 KOs).

Two-time Olympic gold medalist Zou Shiming (8-1, 2 KOs) also sees action in the fight card as he takes on Prasitak Papoem of Thailand (39-1-2, 24 KOs) in a bout pitting two of the top contenders for the vacant WBO flyweight crown.