LAS VEGAS -- While dragging with him a cart full of ice drops to sell at his hometown of Tagbilaran city in Bohol, Mark Magsayo had dreamed of becoming a world champion to help pull his family from the clutches of poverty.

He was only eight years old.

It took a while, a bumpy ride that was laced with some bitterness and sadness that often trails success. But 18 years later, this 26-year-old young man they call "Magnifico" prances one step closer to his ultimate destination.

A victory in this "title eliminator" earns him a shot at the WBC featherweight belt. A loss, God forbid, nudges Mark further down in the contender rankings and guaranteed to wait almost an eternity for the next championship bus.

The odds makers have Mark, a ring tactician who posseses the mythical combination of speed, power and finesse, as a minus 270 favorite (a $270 wager wins $100).

But passing this test isn't a sure bet.

His plus 220 underdog opponent (a $100 wager wins $220) is a no-holds brawler who laces his punches with enough mayhem to sabotage the Filipino's best-laid plans.

"I will win by knockout," said Julio Cesar Ceja of Mexico when he addressed the credentialed media during the final press conference for undercard fighters in the Pacquiao-Ugas main event showcase tomorrow at the T-Mobile Arena.

Talk is cheap. But it can't be taken lightly, especially when the wicked threat is spewed by a 28-year-old hombre who backs his verbal venom with a stellar record of 28 knockouts in 32 wins.

Unlike his loquacious MP Promotions stablemate and current WBO bantamweight champ John Riel Casimero, Mark isn't the talkative type. He did, however, respond to Ceja's dare with a prediction of his own.

"PATUTUMBAHIN KO RIN SIYA,"" HE TOLD SPIN.PH IN A NOT SO VEILED THREAT THAT WAS DELIVERED WITH A PLAYFUL, MALICIOUS SMILE.

Magsayo's words don't ring empty, either. It comes with the cache of a 22-0 record with 15 KOs that include a four-round demolition of Pablo Cruz last April 10.

The unjust stripping of the welterweight belt that legendary Pacquiao once held before it was inexplicably awarded to Yordenis Ugas taints their showdown with animosity. 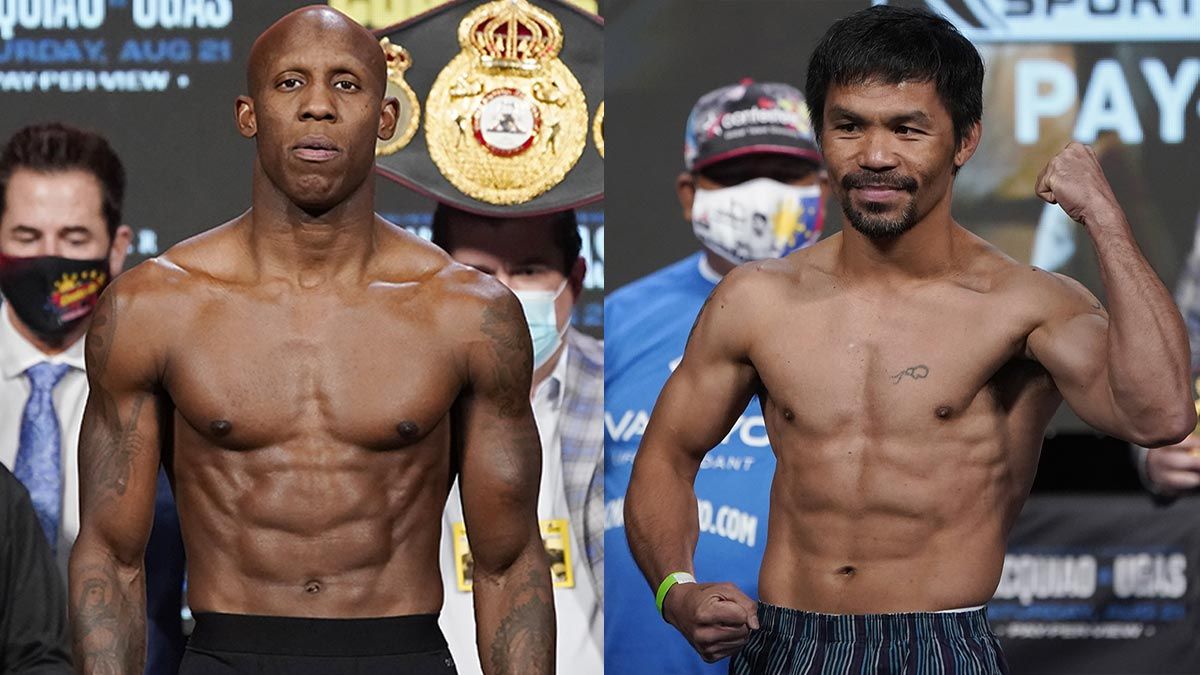 It also carries multiple narratives that mention legacy, potential retirement, and the universally held belief that the fighting senator intends to occupy the esteemed seat of the president the Philippines.

Make no mistake, Manny is the star and the show of this pay-per-view offering.

And what shouldn't be drowned beneath the glare of all the bright lights is the nobility he had shown in saving a lot of people's paychecks by staying on the main event even after an eye injury forced Errol Spence to withdraw.

Manny, who could have just backed out as well, rescued this promotion from the brink of complete cancellation.

Unfortunately, his encounter with Ugas can potentially be boring because the moment he feels Pacquiao's touch, the affable Cuban might resort to clinging and running instead of fighting and swinging.

With the promise of violence and harm leaking from both sides, this clash between angry 126 pounders reeks with bad blood. Masks are mandated inside public places in Nevada but social distancing will not be required when Magsayo meets Ceja.

Their duel is poised to steal the show on the strip.

He trained for three months for Ceja. But Mark has spent nearly a lifetime preparing for this moment.

Hard not to root for this kid.

Harder still is to not watch the fight and not be overcome with fear and anxiety about a life's work that hangs in the balance.

It's the kind of drama that lures us to follow sports.