MACAU -Come Sunday when they step into the ring and sing before a worldwide audience, fellow pastors of Manny Pacquiao will be finding themselves in esteemed company.

A nine-man pastoral chorale has been tasked to sing the national anthem before Pacquiao's fight on Sunday against Chris Algieri, joining a select group that included some of the biggest pop stars in the world which had previously been accorded the honor.

Pacquiao's pastor friends, in fact, took over the honor from Jessica Sanchez, the Fil-American singer who rose to fame after finishing runner-up in the hit reality show 'American Idol.'

One of the pastors said it was an answered prayer.

Pastor Jess Bascunia said the gig wasn't even planned, recalling how Pacquiao gave them the singing chore shortly after hearing them sing the national anthem upon the entourage’s arrival at the Venetian Hotel last Monday.

The pastors come from different churches in the Socsargen region, namely Pacquiao’s Word for Everyone Church in GenSan, River of God, GoodNews and Born Again Sanctuary. 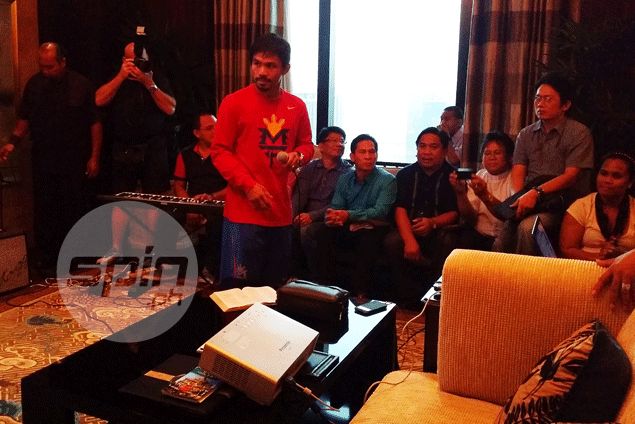 Bascunia bared that although they’re all used to speaking and preaching in front of hundreds of their churchmates, singing at the pre-fight festivities of Pacquiao makes them a little nervous.

“Kinakabahan rin talaga kami kasi ibang atmosphere ito eh,” said Bascunia, who will act as the group’s conductor when they perform atop the ring on Sunday.

And since the invitation came on short notice, Bascunia bared the group has been practicing diligently.

“Pero syempre, kami privileged to sing, knowing una we will represent our country. Pangalawa, it’s an honor for us as pastors that we will be part of this event ni congressman, na alam naman natin eh grabe ang pagmamahal kay Lord,” he added.

Here's the tweet of Pacquiao thanking Jessica Sanchez for stepping aside and giving the singing pastors the honor on Sunday:

Asked if they intend to gain worldwide popularity after the gig, Bascunia said they will be leaving it up to the Lord.

Aware that some previous singers of the national anthem came under fire for veering away from the original marching melody of the Lupang Hinirang, Bascunia said the group will stick to the basics.

Watch the inerview with Jess Bascunia: